BRAZIL: Making a Living from Lumber Without Destroying the Amazon

RIO BRANCO, Brazil, Oct 21 2010 (IPS) - The Zolinger family, a typical example of those who migrated from southern Brazil to the Amazon in search of land and fortune, now has a second chance in the lumber industry, after contributing to the devastation of the forests in Rondônia state, where they settled in 1979. 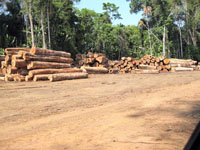 “We have worked here for at least 15 years,” said Sergio Zolinger, 39, with 23 spent in the forest. He was referring to the State Forest of Antimary, in the northwestern state of Acre (neighbouring Rondônia), where logging since 2005 has been permitted under a certification process.

The lumber taken from this forest is considered sustainably produced.

Back in Rondônia, the landowners “gave us just a year to remove the timber” from their vast tracts of land, because they wanted them cleared quickly in order to use it for livestock or farming, he told Tierramérica.

Some landowners thought the lumber prices were too low, “so instead the chose to burn the whole forest,” and destroyed even the mahogany and other commercially valuable trees, he said. Mahogany, which is an endangered species as a result of excessive logging, is now banned for extraction. Other tree species have also disappeared from the legal market.

That waste through burning forced loggers to seek commercially valuable wood in increasingly far-flung areas, said Zolinger. Now, more than 1,300 kilometres west of his home in Vilhena, in the far east of Rondônia, he and his father and older brother are participating in a novel experiment in Acre.

Antimary, officially designated an area of conservation and sustainable use in 1997, is a pioneer in the controlled harvest of its resources, including non- timber products, such as cashew nuts, natural latex and various seeds. Although it was far ahead of the 2006 Forestry Concessions Law, it wasn’t until 2008 that it began to generate the first contracts for up to 40 years.

The Zolinger family business won a contract to extract timber according to a management plan for a 47,000-hectare forest, under management by the Acre State Forestry Secretariat. This year they can cut down trees that have been precisely identified across as much as 4,000 hectares.

The Zolingers had the same limit for 2009, but only covered a little more than half because of limited labour. Their team is just 12 people, in addition to the three bosses, who also work hard. Furthermore, the rainy season extended until early June, and they could only begin work in May.

The work is limited to the Amazon “summer” — the four or five months with least rainfall. Any amount of precipitation can make it difficult to transport the heavy tree trunks along the slippery and hilly dirt roads.

A detailed map of the forest identifies by number the commercial tree species and appropriate sizes. But trees cannot be taken if they are located in the “blue band,” a strip 30 metres wide along rivers and streams that is set aside for permanent conservation, explained the father, Oscar Zolinger, 67, the one responsible for getting his family involved in the lumber trade.

That protected strip could be narrowed to 15 metres if a bill to revise the Forestry Code is successful in Congress. The Brazilian environmental movement strongly opposes such a move.

The measure would boost the amount of lumber extracted from the Antimary forest by 25 percent because it would allow felling “more trees, even the taller ones and those of best quality,” said “Chico” Zolinger, the eldest son. He estimates that the actual forest yield is seven to eight cubic metres of lumber per hectare, and reaches 10 cubic metres in the best areas.

The “suaúma” (Ceiba pentandra, or kapok) is a huge, fast-growing tree with white wood. It is the most harvested tree in Antimary. Previously ignored trees are now being logged because now they have a market, due to the shortage of “more noble” species, said Chico Zolinger.

Management plans also require preservation of large trees in order to ensure strong genetic transmission to future generations of the species. Nevertheless, there are forestry experts who are sceptical about sustainable management in the long term, due to the genetic deterioration that results from logging the best trees in each area.

Antimary is a “unique experience” in Brazil because it is managed by the community — “in an unburdensome way” — not by a lumber company, and the profits from lumber sales are divided among the 56 resident families, explained Carlos Duarte, the state forest secretary, known here by the nickname “Resende,” his hometown.

Raimundo Tavares da Silva, 34, has been living in the forest six years, and is one of the beneficiaries, along with his wife and two young children, as members of one of the three associations. Last year he earned 3,200 reais (1,850 dollars), and this year already received the first part of 2,172 reais (1,280 dollars).

In addition, each family is given 100 hectares of forest where they can harvest nuts, other fruits and latex, and have permission to deforest up to 20 percent of the area, at a rate of one hectare per year, in order to farm or tend up to 30 head of cattle, he explained.

There are also schools for the local children. The lumber extraction also led to the construction of a 30-km road. Although it turns into mud when it rains, it allows residents to reach the paved BR-364 highway. “It used to take nine days to reach the nearest city” on foot, said Silva.

In Acre state, “there are no private forestry concessions,” noted Resende. The idea is to extend the Antimary experience to the three other existing state forests, and to two more areas to be designated as state forests. It requires training the residents and helping them overcome food insecurity ahead of time so that they don’t continue deforesting the area.

Eighty-eight percent of Acre’s forests are preserved, and the state will plant more native and productive species, like rubber trees, nut trees and açaí trees, which produce a fruit now in high demand worldwide, announced the official.

Forest management has helped multiply the value of Acre’s native forests by a factor of 20, which 12 years ago was just 35 reais (20.5 dollars) per hectare. And this is important for preventing deforestation, concluded Resende.