BULAWAYO, Oct 21 2010 (IPS) - As controlled field trials of a genetically modified (GM) crop are about to begin in five African countries amidst promises of improved crops grown under poor conditions, critics are charging organisations with selling out the interests of African farmers. 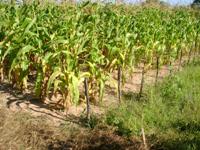 A team of scientists in the United States, Mexico, Kenya, Uganda, Tanzania, South Africa and Mozambique has developed water-efficient maize varieties under the Water Efficient Maize for Africa (WEMA) project. The high-yielding maize varieties are said to be adapted to African conditions and tolerant to various stresses, including pest and disease resistance, found on farmers’ fields in Eastern and Southern Africa.

The drought-tolerant WEMA varieties were developed in partnership with the Nairobi-based African Agricultural Technology Foundation (AATF); the International Maize and Wheat Improvement Center (CIMMYT) in Mexico; multi-national biotechnology company, Monsanto; and the national agriculture research organisations in the five African countries. The programme started in 2008.

But organisations against GM crops, such as Gene Ethics, argue that this biotechnology is not about food security, but profits for commercial interests. Bob Phelps of Gene Ethics in Australia charged that the WEMA project with selling out the interests of African farmers. He said the project was advancing corporate access to public resources and markets in order to maximise private profit.

“This is nothing more than a scheme to unfairly promote and advantage GM techniques and their products over all other means to achieve rural sustainability for African communities. The AATF considers only genetic manipulation solutions to Africa’s drought problems, ignoring all other technologies and management strategies,” Phelps told IPS.

“The strategy also substitutes ‘drought tolerance’ with ‘helping plants to cope with the stress of drought’ – a more rubbery, unquantified and undefined concept open to interpretation,” Phelps said.

But Africa has more mouths to feed despite strides to boost agriculture investment and its under-resourced small holder farmers. Some farmers desperate to earn a living think the GM crops should be given a chance.

Berean Mukwende, a maize famer in Zimbabwe and vice-President of the Zimbabwe Farmers Union, said given poor growing conditions and low yields in drought-prone countries like Zimbabwe, drought-resistant varieties of staple maize should be considered.

“Seed is expensive and normally not available in rural areas and (are) often not the suitable varieties. But with yields low, higher yield and drought-resistant varieties (of maize) would raise productivity and are welcome,” Mukwende said.

He added: “Farmers do not have finance to purchase the seeds and welcome a reduction in cost and are always on the lookout for high yields, drought tolerance, and resistance to pests and diseases traits in seeds.”

AATF’s Project Communications Officer, Grace Wachoro, told IPS that the WEMA project is using advanced breeding technology based on germplasm from CIMMYT’s Drought Tolerance Maize for Africa. The project will incorporate the transgenic drought tolerance trait into some of these new drought-tolerant hybrids.

AATF said during moderate drought, the new varieties are expected to increase yields by 24 to 35 percent compared to current varieties without this form of drought tolerance. If the project succeeds, the increase in yields would translate into two million additional tonnes of maize harvested during drought years.

“That means 14 to 21 million people in the five countries we are targeting would have more to eat and sell,” Wachoro told IPS from Nairobi, Kenya.

In addition, AAFT says, the new varieties have human and environmental health benefits through the reduced need and use for pesticides. The crop is also fortified with increased minerals and vitamins for better health.

But biotechnology promises for boosting food security have not waned despite growing scepticism about the safety of GM crops. If anything, they have fed the case against GM foods.

Gene Ethics believes the WEMA plan focuses exclusively on higher yields with GM crops dependent on increasingly expensive and scarce inputs, such as oil-based fertilisers, pesticides and machinery fuels. The organisation said integrated, biodiverse cropping and management systems that would better serve the long-term needs of rural communities for environmental sustainability, nutrition and balanced diets should be considered as possible solutions.

AAFT has said smallholder farmers will have to pay for the seeds because Monsanto was donating advanced breeding, biotechnology, and expertise to improve the drought tolerance of maize varieties adapted to African conditions. However, they will not be charged royalties.

The varieties will be licensed without charge through AATF for development, testing, and eventual deployment through multiple seed distribution channels.

But Phelps is not convinced. He said nothing is free in the long run and African farmers will pay year after year for GM seed that they cannot save for replanting.

“Monsanto offers its GM seed products free at first, as it did in South America with soy and corn,” he said.

“Monsanto and AATF plan to hook African farmers and governments who will buy GM products later at top prices when other options such as farm-saved seed have disappeared.”