HAITI: Finding Butterflies Among the Rubble

PORT-AU-PRINCE, Oct 1 2010 (IPS) - Michele Garlin had massive headaches after Haiti’s 7.0 earthquake killed some 230,000 people and left 1.3 million others, like herself, homeless. 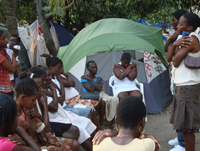 “I also had insomnia and, even if there was no aftershock, I thought my bed was shaking all the time,” Garlin said, speaking in the shade of an open-air community tent, in the Bon Repos camp for displaced people she now calls home.

Along with some 2,000 others in four different camps, Garlin has found relief in a mental health programme called Soulaje Lespri Moun or Relief for the Spirit.

The programme is staffed by lay mental health assistants from the University of the Aristide Foundation, trained jointly by Haitian psychologist Jacques Solon Jean and a team from the University of Michigan headed by Leah James, a clinical psychiatric social worker and doctoral student in psychology and social work. The project is funded by the Aristide Foundation for Democracy, whose mission, since its founding in 1996 by exiled President Jean Bertrand Aristide, is to bring positive change to those on the margins of society, according to board member Laura Flynn.

Jean said the programme didn’t take off immediately: “When camp residents saw new people showing up in the camp, they expected other kinds of assistance, like food and water.” They weren’t familiar with psychological assistance. “Some people were open to this and some were not,” he said.

The programme was designed by the University of Michigan team and adapted by Solon and the assistants to Haiti’s social and cultural needs. It was structured for participants to attend three sessions, but accommodated those who wanted more.

Sessions include discussions during which assistants explain that, while the earthquake was an abnormal event, reactions such as nightmares, frequent crying or screaming, are normal. “Then we teach how to deal with the reaction,” said Pierre Anderson Soulouque, a second-year university student and member of the assistants’ team.

The assistants encourage people to share earthquake stories and talk about their losses and fears with the group, and they lead relaxation and meditation exercises.

“Most of the exercises were new to people,” Soulouque said. “So when we did exercises like the Butterfly Hug, people were asking, ‘what is this?’ But when they did it for the second and third time, they really enjoyed it and asked to do it again and again.”

In fact, when Soulouque invited this reporter to engage in the Butterfly Hug process during interviews with a few Bon Repos participants, eight-to-ten people who had been observing from a short distance away quickly pulled up folding chairs and formed a circle. They clearly didn’t want to miss a chance to do the Butterfly Hug.

Soulouque invited us to close our eyes, fold our arms over our chests and slowly tap our shoulders alternating right and left. We were to leave our stresses behind and focus on a beautiful memory. When we opened our eyes, we were all smiling. It was a powerful shared experience.

“Even if your mind is scattered, the exercises make you focus on one thing. It helps us heal,” said Garlin, whose headaches and insomnia have disappeared. Pure play, including sports and childhood games, are part of the sessions.

One programme adaptation concerned the relationship between participants and the assistants. The Michigan programme did not anticipate an assistant experiencing a personal attachment to participants, Jean said. “But in Haiti, it’s different because we have this relationship among people. So we expected the assistant would have to get closer to the people to feel part of a relationship. We explained to the assistants that people might be calling them, that they would feel that this assistant was someone they could trust and talk with, even after the session.

It falls to the assistants to respond appropriately and therapeutically to whatever participants bring them, such as beliefs that the earthquake was God’s punishment. It should be noted that these assistants had experienced the earthquake themselves. Several of them exhibited signs of post traumatic stress disorder, Leah James said in a phone interview from Michigan.

The first weeks of the programme were very difficult for Soulouque. “So many people you talked to had lost so much,” he said. “You really felt their mourning. And when they started crying, it was a real shock. And sometimes one person would start crying and it would be a real chain reaction and you ended up having eight people in the same space crying.”

To help the assistants maintain their mental health, they meet weekly with Jean for debriefing and “self-care” exercises similar to those they did with programme participants.

The programme has ended in Bon Repos and the two other camps where it started, but is continuing in a fourth camp, while James and the Aristide Foundation apply for grants and look for new partners to support its expansion.

At Bon Repos, former participants carry on an adaptation of the work. “Every Sunday, we have de-stress activities, where children and adults come just to tell jokes, dance, do a little theatre. Sometimes we bring in exercises from the sessions,” said Michele Garlin “It really helps us out.”

Other former participants, such as Louis Charles, are sharing relaxation techniques with neighbours who didn’t take part in the sessions. “The programme is set up, so it can continue without us,” Soulouque said.