GUATEMALA CITY, Nov 23 2010 (IPS) - “Many people still believe that water is a gift from God.” This statement from a Guatemalan scientist alludes to Central America’s neglect of its water resources – – and the subsequent impact on agriculture. 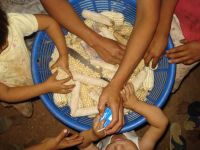 Because it is a divine gift, “they feel they don’t have to pay for it,” said Edwin Castellanos, who holds a doctorate in environmental sciences and has contributed research to the Intergovernmental Panel on Climate Change (IPCC).

But Castellanos told Tierramérica he believes “we should pay not only for adequate water service, but also for cleaning up the water we pollute, which ultimately reaches the rivers and lakes, perpetuating a cycle of contamination and death from diarrheic diseases.”

However, adequate water management requires regulation and education. Guatemala and El Salvador, for example, lack legislation in this area.

“We don’t have laws to regulate the appropriate use of water due to lack of political will and pressure from external groups that benefit from this legal void, especially factories and agro-industries,” said Castellanos, co-director of the environmental studies centre at the private Valley of Guatemala University.

Proper management also means “storing water in small reservoirs at the household or community level, and using dams, as well as the development of infrastructure for transporting water to where it is most scarce,” he said.

Central America, one of the world’s most environmentally vulnerable regions, is already feeling the effects of climate change in water resources and farming.

In some countries of the region, laws have been passed “and agreements have been ratified, but there is an enormous gap between that and taking definitive action,” said Costa Rican IPCC advisor Edgar Gutiérrez Espeleta.

Global warming, water management and agriculture “are not priorities” in a region absorbed in “boosting exports and tourism at any cost,” said Gutiérrez Espeleta, expert in forestry sciences and statistics.

“Water has been managed as if it were an inexhaustible good,” he said, in agreement with Guatemala’s Castellanos.

On the isthmus, each person in theory should have more than 3,000 cubic metres of water available per year, while in North Africa or the Middle East, the rate is 200 to 300 cubic metres per person per year, according to the Alianza por el Agua (Alliance for Water), a network of public and private institutions in Spain and Central America.

But just 42 percent of Central America’s rural population and 87 percent of the urban population have access to potable water. And supply and distribution have only worsened with climate change.

“We know that global warming will bring more drought for the Pacific side and more rain for the Caribbean side… Now is the time to begin managing the available water with a focus on the watershed and the participation of everyone,” said Gutiérrez Espeleta.

Hurricanes Mitch (1998), Stan (2005) and Agatha (2010), and the 2009 drought — all attributed in part to climate change — left hundreds of thousands of people homeless and vast damage to agriculture across the region, mainly in Nicaragua, Honduras, El Salvador and Guatemala.

Losses in the farming sector due to environmental disasters between 1972 and 2007 total nearly 11 billion dollars, equivalent to 5.7 percent of Central America’s GDP (gross domestic product) in 2007, according to a report on climate change’s effects on agriculture by the Economic Commission for Latin America and the Caribbean (ECLAC).

Farming and livestock are the engines of the regional economy, and if agro- industry is included, they represent 18 percent of the total GDP, as well as being the main suppliers of food, says the study.

In the opinion of El Salvadoran consultant Yvette Aguilar, the strategies to protect water should be encompassed in land-use regulations, which also implies improving agriculture.

Farming and ranching use 70 percent of all water extracted for human consumption worldwide, according to the United Nations Food and Agriculture Organisation (FAO).

“It’s vital to implement measures that facilitate adaptation by poor rural and urban families,” that include sustainable agriculture and defence of “the right to land,” said Aguilar.

The drought triggered last year by El Niño/Southern Oscillation, a cyclical climate phenomenon that alters the currents and temperatures in the inter- tropical zone of the Pacific Ocean, led to the deaths of 54 children and several hundred adults from malnutrition in Guatemala’s “Dry Corridor,” where residents rely on subsistence farming for survival.

This year, it was floods that ruined their crops.

The subsistence farmers, who grow maize, beans and vegetables, “should adapt to climate change and augment their income by combining the cultivation of grains or vegetables with trees and ecological farming,” he said.

Surplus crops, destined primarily for the market, need a similar treatment. “And the big farms should use precision agriculture, based on technology, for the rational use of water and agro-chemicals,” Monterroso said.

Leonel Jacinto, of FAO Guatemala, told Tierramérica that in the Dry Corridor experts are looking for ways to improve moisture retention in the soil, using crop stubble, agro-forestry and organic fertilisers — and encouraging farmers to diversify what they grow.

“The first step is to create experience with a few families to demonstrate that it works,” he said. In this scheme, the role of the government comes later.