MEXICO CITY, Nov 9 2010 (IPS) - The beauty of the Mexican Caribbean resort city of Cancún may have been one reason for choosing it to host the upcoming global summit on climate change. But Cancún has little to recommend it as a model for adapting to the challenges posed by climate change. 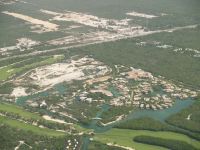 Aerial view of the Moon Palace hotel, to host COP16, where an aero generator is to be installed without an environmental impact study. Credit: Courtesy of Mexican Centre for Environmental Law (CEMDA)

The destruction of mangroves, excess garbage and hotel sprawl are just some of the environmental problems found in Cancún, or “pot of snakes” — just one of many meanings attributed to the city’s Mayan name.

“Cancún is an embarrassment. I don’t understand how it was chosen for the summit. It’s an example of what should not be done,” said ecologist and former public official Guadalupe Álvarez, founder of the non-governmental organization Cielo, Tierra y Mar (Sky, Land and Sea).

From Nov. 29 to Dec. 10, the city will host the 16th Conference of Parties (COP 16) to the United Nations Framework Convention on Climate Change (UNFCCC), in a bid to reach a global agreement to reduce emissions of gases that cause global warming.

Situated on the Caribbean coast, in the eastern state of Quintana Roo, Cancún has seen explosive growth since 1980, becoming the primary tourist destination in Mexico. And it has paid a high environmental price.

This year, Mexico received at least 11 million tourists — who spent 13 billion dollars — and six million of them went to Cancún, where they spent more than 4 billion dollars.

In addition to the visitors, 900,000 people live there year-round. About 800 tons of garbage are produced daily, and the only authorized sanitary landfill does not have the capacity to receive any more.

“The city has planning problems; it has had growth beyond the legal standards, which has led to the erosion of beaches; and there is heavy pollution,” Alejandra Serrano, delegate of the non-governmental Mexican Center for Environmental Law, told Tierramérica.

In Quintana Roo, mangrove forests cover 64,755 hectares, making it fifth of Mexico’s 32 states with the most coastal mangrove ecosystems.

These saltwater wetlands in Cancún extend across 11,392 hectares, but each year the total shrinks by 4.8 percent, according to the National Institute of Statistics and Geography.

Mangrove forests are home to a great variety of species, but also serve to purify water and protect coastlines from heavy seas, hurricanes, and erosion in general.

They can also absorb carbon from the atmosphere. In 2008, Mexico’s wetlands captured 1.48 million tons of carbon dioxide, according to The Global Peatland CO2 Picture, published by Wetlands International.

Mexico emits 715.3 million tons of CO2 annually, of which 9.9 percent comes from deforestation, according to the Secretariat (ministry) of Environment and Natural Resources.

Pushing the decimation of the mangroves is the powerful hotel industry. It is what pits the Secretariat of Environment against one of its subordinate entities, PROFEPA, the federal environmental prosecutor.

The municipality’s programs for urban development and environmental regulation, which determine land use in Cancún, set the maximum hotel capacity at 30,990 rooms. PROFEPA says there are 36,852 rooms, nearly 6,000 more than allowed, but the Secretariat of Environment denies this.

“The loss of vegetation on the strip of sand that used to stop sedimentary material was dramatic during the development period of the hotel zone,” states a 2009 recommendation that PROFEPA sent to Environment Secretary Juan Elvira.

According to the document, erosion has increased along with the expansion of human settlements, evident in that most of the construction has been on the coastal dunes.

Following hurricanes Wilma (2005) and Ida (2009), the city’s beaches shrank from about nine million cubic meters of sand to just 700,000 cubic meters, the Secretariat of Tourism reported.

The white sands of Cancún would not exist “if it weren’t for the coral reefs,” Roberto Iglesias-Prieto, a marine ecologist with the Autonomous National University of Mexico, told Tierramérica in a 2008 interview.

The Mesoamerican Reef, located in waters off the Yucatán Peninsula and shared by Mexico, Belize, Guatemala and Honduras, extends 1,100 kilometers. It is a major tourist attraction, and, like the mangroves, reefs provide protection from coastal erosion caused by hurricanes.

But the reef is on the decline due to overfishing, pollution and climate change, which warms the ocean water and makes it more acidic, leading to coral bleaching.

After the hurricanes, the tourism authorities took nine million cubic meters of sand from other beaches and deposited it in Cancún and neighboring Playa del Carmen and Cozumel, at a cost of 80 million dollars.

One of the fiercest critics of that “beach rescue” is Sky, Land and Sea activist Álvarez. In July she sent a complaint about the sand transfer to the Public Operations Secretariat, but has yet to receive a response. In September she sent a letter to President Felipe Calderón.

The Secretariat of Environment is preparing to publish a new hotel sustainability standard that would require the industry to comply with policies from the beginning of any building project.

Rules will be set for the use of alternative energy sources, construction materials, wastewater management, what types of vegetation can be planted, and hiring local labor. Furthermore, no buildings can be constructed in areas occupied by mangroves.

“It is a big step forward, because each project can be made sustainable at each stage of construction,” said Serrano, whose organization tracked the process that resulted in the new legal framework.