BUKALASI, Uganda, Feb 24 2011 (IPS) - Producing quality Arabica coffee beans on the slopes of Mount Elgon in eastern Uganda is only viable once farmers are assured ready access to the global market. Fair trade has made this possible. 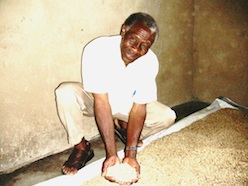 Rural communities in eastern Uganda have gained much-vaunted access to the global market by supplying coffee to Cafédirect, a British company in which founders, growers and employees alike own shares. And coffee consumers thousands of miles away benefit by enjoying organically cultivated coffee.

Taking a bumpy road, IPS visited farmers in Bukalasi sub-county in Bududa district, about 275 km east of the capital Kampala.

Stanley Nasasa, 63, has worked almost his entire life as a coffee farmer but feels he is only now enjoying real benefits. The reason: fair trade.

Nasasa is secretary of the Bukalasi cooperative society. The society is a member of the Gumutindo coffee cooperative, or grower organisation, that works with Cafédirect to ensure ready market access and better prices for the Arabica coffee farmers of the area. Gumutindo means “excellent coffee” in the vernacular Lugisu.

Getting prices on which livelihoods can be sustained is of uppermost importance to farmers as that allows them to build houses, educate their children and transform communities.

At Nasasa’s home IPS discovered why he has become a fair-trade crusader. His family had just moved into a newly built brick-walled house with a cement floor after living in a mud and tin-roofed house in a mudslide-prone area.

Flanked by his wife Stella, Nasasa said the money came from savings after receiving good fair-trade prices and “social premiums”.

Gumutindo pays a social premium with each kilogramme of coffee that is produced, which comes in the form of a bonus that farmers can use for support projects that are also aimed at people not engaged in coffee production.

Nasasa told IPS that, “the fair-trade arrangement has saved us from predatory coffee dealers who give farmers far less than the market price of coffee. We have come a long way, I tell you.

“There was a time when we would carry coffee all the way to Chebukube market in Kenya. It was not easy because some people lost their lives.” He was referring to the coffee-smuggling days of the 1970s during dictator Idi Amin’s reign.

Amin’s policies caused an economic meltdown that affected the marketing of coffee. Farmers stored coffee in their houses because of lack of markets. They had to trek through the mountains to neighbouring Kenya to sell their coffee in order to survive.

Nasasa said the new house is a relief to his wife who always had difficulty climbing the hilly area where their original house was located. “Life is better here. We lived in fear after several people near to where we stayed were killed by mudslides last March (2010).”

Behind the house is a barn with two Friesian cows producing milk for the family. There are three raised stands with wire mesh in the compound. The stands are used to ensure a clean space for the drying of the Arabica coffee beans.

Inside Nasasa’s house one big room has been reserved for storing and drying coffee. He squatted, showing IPS very white coffee beans in his hands while smiling: “This one is surely AA grade, the highest quality according to Gumutindo standards,” he remarked.

About 50 m from the Nasasa home lives Wilson Mabala, another Gumutindo supplier. Asked about the benefits of supplying coffee under fair trade rules, Mabala replied that, “since we joined Gumutindo we have maintained our lands using organic manure. We are getting a good price for our coffee.

“I have personally benefited a lot. With the better earnings, I have sent my children to better schools than I could afford in the past,” he added.

Primary education in Uganda is free of charge but many parents concerned about the quality of education opt to take their children to private schools where they foot the bill. Mabala told IPS that he spends over one million shillings (500 dollars) per year on school for two of his children.

A short walk farther IPS came across a project where the Bukalasi cooperative society stores are being expanded to create more storage facilities for coffee.

Mabala, who is also chairperson of Bukalasi cooperative society, told IPS that the stores’ expansion is financed with social premium receipts.

“The farmers sat and decided that we should expand the store so as to create more room for the storage of coffee. You cannot have ‘gumutindo’ (excellent coffee) when you store it badly,” he explained.

Behind the store, IPS found Sera Nafungo tilling a garden where coffee has been planted with beans and yams. Nafungo, who has four children, remarked that fair trade has taught farmers to preserve their soil using organic manure. “We get free coffee seedlings and have been taught how to prevent pests and keep the nutrients in the soil,” she enthused.

“I have managed to buy some Friesian cows and now have a constant supply of milk at home, some of which is sold,” she added.

Mabala told IPS that other farmers in the area have witnessed the benefits of fair trade farming and were eager to join. “We hope to expand our membership but we are doing it systematically. A new member must be taught about quality requirements before we can admit him or her,” he insisted.

According to Cafédirect’s website, the company is the result of “Oxfam, Equal Exchange, Traidcraft, and Twin Trading’s decision to bypass the conventional market and buy coffee direct from disadvantaged growers in developing countries”.

Over a period of five years, it had paid growers more than 13,4 million dollars over and above market prices for raw materials.