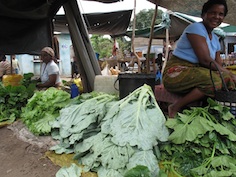 African women continue to be at the receiving end of persistent development challenges. Credit: Nastasya Tay/IPS

The Bank says its new plan will prioritise employment and competitiveness, while also addressing the problems that make African countries particularly vulnerable to disaster, disease and climate change.

Until the global economic crisis, economic growth on the continent was averaging five percent a year for a decade. But, as the World Bank’s new strategy acknowledges, African countries have continued to face persistent, long-term development challenges.

Furthermore, insufficient increases in productive formal employment, a massive infrastructure deficit, and the risks that come with climate change all add to Africa’s woes.

Political backlash against foreign aid, as well as austerity measures in developed countries, mean the continent will receive less financial assistance than promised. And marginalised groups – women and the chronically impoverished – will feel the gap the most, Ezekwesili stated at the Bank’s strategy launch on Mar 3.

“Africa’s Future and the World Bank’s Support to It”, the Bank’s new plan for the continent, calls for intervention in three key areas: encouraging competitiveness, mitigating vulnerability and building the capacity for improved governance.

The strategy aims to restructure the bank’s approach to the continent, redefining Africa as “an investment proposition” to attract private finance, especially from emerging economies such as China, India and Brazil.

In a departure from the Africa Action Plan (AAP) – the bank’s previous regional strategy document – the new plan is the culmination of a year-long consultation process that surveyed 1,000 people across Africa and 400 people online.

The World Bank learned its lessons from the AAP experience, Ezekwesili admitted. “Previously, even though there was a level of consultation, it was not adequate.”

Those surveyed identified poor governance as the main challenge for the continent’s development, attributing deficiencies in infrastructure provision and social services to corruption and the lack of public sector capacity to manage resources.

The World Bank regards political instability; the proliferation of fragile states across the continent; and resource-rich countries afflicted by widespread corruption and civil conflict as exacerbating governance challenges.

The Bank’s plan is based on an ambitious foundation to develop governance and public sector capacity, by increasing citizens’ access to information through supporting monitoring and expenditure tracking surveys by non- state actors.

“We will focus on both the supply side and the demand side of governance,” declared Ezekwesili.

“On the demand side, our strategy will be to strengthen citizens’ voice using instruments of social accountability and we will exploit the use of ICT (information and communication technologies) to provide innovative ways for citizens to demand results.”

The strategy aims to help countries diversify their economies and generate jobs through harnessing private sector growth, especially for the estimated seven to 10 million young people who enter the labour force on the continent every year.

Attention is given to technical skills development, the agricultural sector and scaling up small-scale entrepreneurs in strategic sectors.

The plan includes the development of several “Growth Poles” to support urban development through deploying “a critical mass of reforms, infrastructure investments and skill-building on the industries and locations of highest potential”.

The Bank is planning “Growth Poles” in Madagascar, Cameroon, Mozambique, The Gambia and the Democratic Republic of Congo.

Emphasis is placed on government interventions in industries which have a latent competitive advantage, as well as those that seek to create a less constrained business environment.

The second pillar of the Bank’s strategy focuses on mitigating the effects of macroeconomic shocks, health shocks, natural disasters and the consequences of conflict and political violence.

The plan suggests more space for social safety nets that can be rapidly scaled up in the face of increased hardship. It also envisions broader public health interventions, as well as “insurance-like mechanisms” and support for private healthcare to boost delivery capacity.

In response to climate change, the World Bank plan identifies cost-effective measures for adaptation, prioritising the sustainable management of existing assets, such as fresh water, fisheries, forests and wetlands.

The Bank aims to implement its new strategy predominantly through partnerships, knowledge development and finance, emphasising a shift in priorities from financing instruments to public-private dialogue and strengthening regional structures like the African Development Bank.

Ezekwesili stressed the need for World Bank interventions to complement national policies. She believes national governments should take responsibility for their fiscal and policy choices.

The strategy will inform the Bank’s engagement with the continent over the next 10 years, as well as its affiliated development and financial institutions.

Ezekwesili concluded that, through strategic selectivity, the strategy must be implemented “in order to deliver impact for the citizens of Africa, for whom the primary responsibility to deliver results lie with their own governments”.