Q&A: “We Denounce the Militarisation of Our Lives” 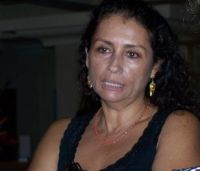 Behrous Amiri spoke with Guerrero, who helped found the “City of Women” outside Cartagena in 2003, a space where women displaced by the fighting could evolve from victims to agents of change.

Altogether, some 5.2 million people were forced to flee rural areas of this South American country between 1985 and 2010, according to a report released in February by the Consultancy on Human Rights and Displacement

Q: Your group was recently threatened by a paramilitary group for the fourth time. Which one was it? A: The Black Eagles, Águilas Negras.

Q: You help women who were forced to flee their communities, homes and lands due to violence. Why is Águilas Negras threatening you? A: Because we are women human rights defenders. And they hate human rights, particularly women’s rights. They hate justice, reparations, and the truth about the crimes committed by them.

Everybody in this country knows that they are state agents behind that ridiculous name. They want to scare our communities, [which are] in peaceful resistance against perpetrators of crimes again humanity and war crimes. They are panicked by our knowledge of their crimes, because we have documented their crimes for more than 10 years. They are panicked by our capacity and commitment to justice for displaced women.

They killed more than 50 human rights leaders, men and women, last year, they are really killers.

Q: How is your work affected by the paramilitary threats? A: The League of Displaced Women represents more than 600 families in the northern part of Colombia, known as the Caribbean region. This area was impacted by many paramilitary groups, who carried out numerous massacres.

In the last five years, they committed many atrocities against our people and projects.

They killed Jose Miguel Peréz Espitia, the husband of one of our indigenous leaders.

They burned down our community centre, called the Heart of the Women, Corazón de las Mujeres in Turbaco Bolívar.

They make threatening pay phone calls to our leaders.

They killed Jair Pantoja Berrio, in the barrio el Pozón in Cartagena.

They raped more than 10 women of our organisation in the conflict and they displaced 56 percent of our people.

They killed many families, stole their land, and destroyed the social fabric and community history. All these crimes remain unpunished.

Q: What are the objectives of the Liga de las Mujeres Desplazadas and what have you achieved so far? A: The restitution of every single and collective right, land rights for example, of the women of our organisation and the displaced women in Colombia. Justice at the national and international level. Protection at the national and international level for the leaders and the women in communities like the City of Women.

In that regard, we have protective special measures provided by the Inter-American Commission on Human Rights, which also accepted our first case against the Colombian state for violations of treaties like the American Convention on Human Rights and the Convention of Belém do Para related to violence and discrimination against women.

They don’t have a high level of education, and they have lost their livelihoods as campesinas since they and their families were forced to leave their land, which is now in the bloody hands of narco-paramilitaries.

Displacement and rape are usually connected. Many families are destroyed for that reason. Women lost their economic support and prostitution became a solution for some of the IDP [displaced] women. Child prostitution, very young narco gangs who fit the narco military economy, very easy forced recruitment for the war and so on – that is the circle of violence in this country for decades. Rape, HIV/AIDS and other silent diseases are part of this panorama.

Q: What impact do threats have on the daily life of you and your colleagues? A: We must strengthen the strategies of community protection, particularly of young women and leaders. We have to work more and faster. One of our leaders started a new mothers’ organisation against forced disappearances in September 2009 when her youngest son was killed in Cartagena.

In some parts of Cartagena, more than five young men and women are killed every week.

I continue my work as a lawyer at the international level in the Inter-American Commission on Human Rights as a chair of the gender justice agenda, and to demand answers from the [Colombian] state about the intellectual actors behind [the violence], and how it will protect IDP women, particularly the women of the Displaced Women’s League. On Feb. 18, we demanded a meeting with the foreign minister, the minister of justice, and with the attorney-general of Colombia.

Q: What can you do about the threats of the Águilas Negras? A: We have three denunciations filed in the office of the attorney-general, but none have been answered. We are demanding the disbanding of the paramilitary structures, severing the connection between paramilitaries and some security sectors, for example, the police and armed forces. [We are demanding an end to] the impunity for state crimes, and crimes against IDP women leaders in Colombia.

Q: What do the displaced women you are working with urgently need? A: The international community, the U.N., the Special Rapporteur on Violence against Women of the U.N. system, U.N. Women, the CSW have to demand answers from the Colombian government, from President [Juan Manuel] Santos, related to these continuous threats against women’s rights defenders, particularly at the grassroots level like the Displaced Women’s League.

Impunity and violence against women is a huge roadblock to peace. We denounce the militarisation of our lives in the name of the war on drugs, the war on terrorism, the war on everything that threatens capitalism and their financial world.

We demand the legalisation of coca and respect of the indigenous ancestral culture. We demand social and political responsibility of the United States and the European Union for the crimes committed in Colombia in the name of war on drugs.