GUATEMALA CITY, May 17 2011 (IPS) - “If they come here to extract iron from the beach, it will mean the destruction of our natural wealth and the end of tourism,” warned Leonel Palma, a hotel employee in Puerto de San José on Guatemala’s Pacific coast, where the government has granted mineral exploration licenses. 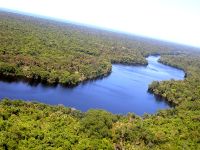 “Tourists come here to swim and relax, but if there are mining operations on the beach, what will they do then?” asked Palma, who greets visitors upon their arrival at the Costa Verde Hotel, 113 kilometers from Guatemala City.

Environmentalists, academics and local communities have vocally opposed the licenses granted by the government of social democrat Álvaro Colom for the reconnaissance and exploration of the iron sands on the country’s southwestern coast.

“There are fears, because we have already lived through situations like what happened when they built the dock at Puerto Quetzal (located next to Puerto de San José) and seawater leaked into freshwater wells,” something that continues to happen when there are heavy swells, said José Urbina of the non-governmental Local Power and Development Collective, based in the southern department of Escuintla.

On May 28, a peaceful demonstration will be held in Puerto de San José to highlight the opposition to iron mining operations on the southern coast, Urbina told Tierramérica.

In 2009, the Ministry of Energy and Mines issued three reconnaissance and exploration licenses to Tikal Minerals, a subsidiary of Mayan Iron Corporation, for an area of 292 square kilometers in the departments of Escuintla, Retalhuleu and Suchitepéquez.

Mayan Iron Corporation is based in Australia and has attracted substantial investment from China. The company is named after the ancestral indigenous peoples of Guatemala and was created for the purpose of exploiting the iron sand deposits in this Central American country.

Until now, however, none of the three projects proposed by the company has been given permission to proceed. In fact, on April 5, the Ministry of Environment and Natural Resources rejected the only environmental impact assessment submitted so far by Tikal Minerals for one of those projects.

The authorities determined that “the project is not environmentally viable,” because it would lead to extractive activity that could create “serious risks for the integrity of the country’s coastal-marine ecosystems and repercussions on the health and safety of the population of the coastal region.”

Mining the iron would require extracting the sand with excavators or dredges and transporting it to a plant where the minerals, mainly magnetite, would be separated out by using magnets. Once this process is completed, 90 percent of the sand would be returned to the beaches, and the iron would be transported from a local port to China.

“The principal basis of our position is that the authorities used arguments corresponding to an exploitation project when what we had submitted was an environmental instrument for exploration, which makes it improper to address it in this manner,” he said.

Exploration activities normally require only a mitigation plan, but the ministry decided to demand an environmental impact assessment when the company requested permission to conduct drilling.

Carlos Salvatierra of the environmental organisation Redmanglar International told Tierramérica that whatever extraction procedures are used, “there will be environmental consequences. We are concerned about penetration of the salt wedge and the subsequent salinisation of freshwater systems,” he said.

Moreover, mining activity in a marine-coastal area implies a change in land use that affects the entire ecosystem and, as a result, fishing activity and tourism, he added.

According to Tikal Minerals, Guatemala’s iron deposits could total almost 100 billion tons, or 12 percent of world reserves, estimated at 800 billion tons. The magnetite-rich sands are carried by rivers from the country’s volcanoes to the Pacific coast.

In 2009 the Guatemalan government granted the Canadian company G4G and Iron Sands America a reconnaissance license for an area of 2,492 square kilometers encompassing the entire Pacific coast, from the Mexican border to the border with El Salvador.

Toledo of Tikal Minerals said that because the company has not been able to conduct on-site exploration, it cannot estimate the economic contribution or employment creation that would result from iron extraction activities on the Pacific coast.

He claimed, however, that a balance could be struck between mining development and environmental protection in order to improve the population’s quality of life. “We are not interested in operating on the beaches, but rather a kilometer inland, and we would ensure that any natural reserves, mangroves and fragile ecosystems are not affected,” he stated.

Meanwhile, on the other side of the country in a protected area on the Caribbean Coast, there are plans to install a liquid petroleum gas storage plant.

The plans foresee the construction of five storage facilities with a total capacity of 28,390 liters of gas and the installation of a land and sea pipeline stretching seven kilometers along the coast of Puerto Barrios, in the northeastern department of Izabal.

In February 2010, the Tomza Group of Mexico initiated work on the project without prior approval of an environmental impact assessment. The governmental National Council for Protected Areas (CONAP) rejected the assessment and suspended the work.

CONAP’s decision was based on the fact that the project is located within the Punta de Manabique protected area, comprising 1,519 square kilometers of marshes, reefs and mangroves and home to diverse animal species like the American crocodile (Crocodylus acutus), green iguana (Iguana iguana) and green sea turtle (Chelonia mydas).

“Any industrial activity is prohibited there because it represents a major risk,” CONAP official Gustavo González told Tierramérica.

In February, the Tomza Group submitted a new environmental impact assessment in hopes of resuming work on the project, but González believes that “in order for it to work legally, the company will have to find another location.”