NAIROBI, Jun 21 2011 (IPS) - As an estimated 3.7 million dollars continues to sit idle in the Women Enterprise Fund (WEF) kitty, the very women the fund was meant to benefit have complained about the difficult requirements that need to be met in order to access the money. 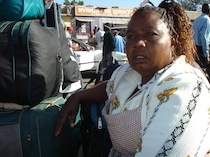 “We are aware that there is money for women but where is that money? I have tried to access the funds with no success,” explains Cathy Wambui, a grocer in Central Kenya.

Asked whether she presented a business plan to the WEF constituency offices, Wambui says that she does not know how to draw one up. Without being able to meet this requirement of the fund, Wambui and other uneducated women cannot make use of an opportunity that could transform their economic situation.

The WEF was set up in December 2006 by government and was intended to address poverty alleviation through the socio-economic empowerment of women. This was after government had noted that a vast number of women were “unbankable” and marginalised in the economy.

“These women also lacked access and control over assets, making them ineligible for credits from the bank,” explains Dr. Winfred Mwai, a lecturer of gender and development in Nairobi. “In fact, figures from the ministry of land show that only a paltry three percent of women have title deeds: no bank would touch the remaining 97 percent.”

There are two ways to access the WEF. Women can apply for loans through microfinance intermediaries such as banks, non-governmental organisations and savings and credit organisations. Women can apply as individuals, companies or as groups and up to about 6,500 dollars can be borrowed over three years at an interest rate of eight percent per year. To access this women have to be 18 years and over, have a bank account, and have a business already running or a viable business plan.

Women can also access the money through the Constituency Women Enterprise Scheme. Funds are not available to individuals and one is required to be in a group of at least 10 people and the group should have existed for three months prior to the loan application. Loans are interest free but have an administration fee of five percent. About 600 dollars per member is available and the members do not need to run the same business.

But meeting the requirements has not been an easy task for some women. Stella Omollo from Nyanza region was only able to access the fund after a long wait.

“It is true there are women who want the money but can’t meet the requirements. There are those who have no idea what a business plan is and run whatever business they have as a way of life and not really with a business mindset,” Omollo says.

Omollo also did not know how to draw up a business plan until she asked her nephew, a college student, to help her. Omollo, however, says it is the responsibility of the fund officials to ensure that women are adequately trained and know how to access the funds.

“Indeed we are trained before accessing the money, but the information is generally inadequate and only benefits women who are quick to understand issues. Most of the target group for the fund have no proper education and are in the informal sector,” Omollo says.

Wambui agrees: “What’s the point of a one-off session for women in the informal sector? We need consistent training, perhaps once every three months to keep us on track.”

When the fund started each of the 210 constituencies in the country were allocated the equivalent of 12,000 dollars; but this has now been doubled to meet demand through an increased national budgetary allocation.

The Fund’s CEO, Samuel Wainaina, has heard the complaints about women having a hard time accessing the money available.

“There have been complaints relating to lack of information on where to access disbursed funds, particularly among rural women. There is need for more information,” Wainaina admits.

The WEF report also admits that more training is needed for women, especially on how to write business plans.

Of the 210 constituencies only Wajir South, in northeast Kenya, is yet to exhaust its first allocation. In Nairobi, about 80 percent of the money available has already been accessed by women.

Another major problem has been the misinformation that was spread about the Fund by various leaders. As a way of getting votes, many told women that the money available from the WEF is not a loan but a stimulus package from the government. In fact, just after the 2007 elections, the loan defaulters almost brought the Fund to its knees. But the Fund managed to recover 70 percent of the loans.