PESHAWAR, Jul 19 2011 (IPS) - A video showing a group of 16 Pakistani policemen, hands tied behind their backs, being executed by Taliban gunmen in the Dir district of Khyber Pakhtunkhwa is only the latest in a series showing brutal acts designed to strike terror in the areas bordering Afghanistan. 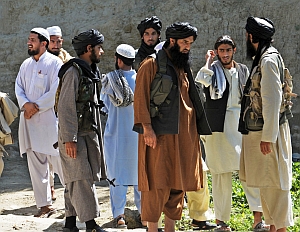 Taliban fighters have sanctuaries along the border areas between Pakistan and Afghanistan. Credit: Ashfaq Yusufzai/IPS

In the video, released on Monday, an unknown member of the Taliban (Islamic scholars) explains that the policemen are being punished for abandoning Islam and to avenge the deaths of six Pakistani children killed during security operations in adjacent Swat district.

The policemen are believed to have been abducted by the Taliban during a raid on a security post in the village of Shaltalo on Jun. 1.

“We first thought that we were watching a scene from an action movie and could not believe that it was an authentic recording of executions,” Imranullah, a resident of Dir, told IPS.

“But, given the Taliban’s reputation for brutality, we were soon convinced that it was genuine,” Imranullah said. “We still remember how the Taliban murdered a popular female dancer called Shabana in Swat and strung her body up from an electricity pole as warning.”

Swat, an international tourist destination, was ruled by Taliban from 2007 until 2009 when they were evicted in an army operation. Shabana’s gruesome execution in December 2008 resulted in some 400 women dancers fleeing the district or confining themselves to their homes.

The Taliban uses terror tactics not only to enforce their fundamentalist ideology but also against their political opponents and those suspected of passing on information to the United States army engaged in the ‘war-on-terror’ in neighbouring Afghanistan.

In 2005, a truck driver was dragged through a bazaar in South Waziristan before being killed and his body was left hanging from a post. A note pasted over his body read: “Those spying on the Taliban for the U.S. will face similar punishment.”

As an ally of the United States in its ‘war-on-terror’ in Afghanistan the Pakistani military has launched offensives against the Taliban and other extremist groups holing up along the mountainous border areas.

In 2007 the Pakistani army launched an operation in Swat against Taliban and al-Qaeda elements that began crossing over the porous border seeking sanctuary from the U.S.-led invasion of Afghanistan in 2001.

In January 2008, the Taliban killed Pir Samiullah, one of their opponents in Swat, and later exhumed his body to be displayed in a public square shocking people in the valley.

In the graphic Dir video, the Taliban fighters start firing at their victims on orders shouted by a commander. The firing continues as the Taliban examine the fallen policemen and fire at them from close range to ensure they are dead.

Speaking in the Pashto langauge the commander is shown directing fire at particular policemen.

A member of the Swat Peace Committee, Ziauddin Yousafzai, told IPS that the gross human rights abuses and the videos have so terrorised the local people that they are afraid to speak out against the Taliban.

“In Swat district alone, about 300 people, including policemen and people opposed to the Taliban people, have been slaughtered. Often their bodies would be displayed at the Green Chowk (square) to send out the message that those opposing Taliban will meet an identical fate,” he said.

In September 2010, the outlawed Tehreek Taliban Pakistan (TTP), stoned to death an elderly woman accused of committing adultery. The video showed the woman pleading for mercy and claiming innocence.

In January, a former Pakistani military intelligence official, known as Col. Imam, a senior officer in Pakistan’s Inter-Service Intelligence, who was considered close to the Afghan Taliban, was executed in the presence of TTP chief Hakimullah Mahsud.

“Killing an elderly person in a brutal way is against Islam and violates all norms of human rights. These barbaric acts have earned disrepute and notoriety for the Taliban,” Hafizullah, a student at the University of Peshawar, who had seen Col. Imam’s execution video, told IPS.

Hafizullah says that such inhuman acts had brought a bad name to Islam.

“Every religion, including Islam, advocates peace and enjoins its followers to shun violence. Taliban are doing the opposite. They neither respect women nor men while Islam calls for equal treatment of men and women, irrespective of colour, creed, gender and religion,” Hafizullah said. International rights groups like the Human Right Watch, Amnesty International as well as the independent Human Rights Commission of Pakistan have repeatedly condemned brutal acts committed by the Taliban and also the Pakistan army.

Residents of Swat have bitter memories of the years when Taliban held sway over the valley and banned women from visiting bazaars and female students from attending school.

“They displayed banners in Swat warning that women were not allowed to venture out in public unless accompanied by a male family member,” Yousafzai said.

In April 2009, Swat hit headlines for a video showing the flogging of a teenaged girl who, unable bear the pain, could be heard pleading to be put to death. The girl had been charged with having an illicit affair and her denials were ignored.

Killing innocent people on charges of adultery or of spying is now commonplace and the Taliban take pride in claiming responsibility for these acts.