JUBA, Aug 23 2011 (IPS) - Thousands of women and children are being abducted and over 1,000 people have died this year as communities in oil-rich South Sudan war over a precious commodity – cattle. 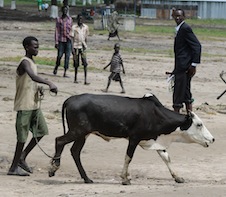 A boy in Pibor County, Jonglei state, takes a cow to graze. In South Sudan cattle are valued for their intrinsic wealth. Credit: Charlton Doki/IPS

In the newly independent country, which produces about 385,000 barrels of oil a day, inter-ethnic clashes over cattle have long prevailed. Here, owning many cattle is a sign of wealth. However, in recent times the cattle raids have become more frequent and deadly.

There are growing calls for the South Sudanese government to address the underlying causes of these clashes. Many are concerned that unless the issues behind the violence are resolved, insecurity will continue to hinder stability and development in the new country.

The conflict is being attributed to the easy availability of arms and cultural norms that portray the ownership of cattle as a sign of success.

Following the end of the country’s 21-year civil war in 2005, the value of cattle has rapidly risen as many men now hope to marry. It is common for people to pay a bride price or dowry in cattle.

James Amuor, a youth from Jonglei state, told IPS that a bride could cost as much as 100 head of cattle. “Some youth are involved in cattle rustling because they want to marry and they don’t have the required cattle. They have to go and raid cattle to raise a dowry to marry the girl of their choice,” Amuor explained. In the Dinka community, the taller the bride is, the higher the bride price. The same applies for an educated woman.

The entire county, which is the equivalent of a district in other countries, was attacked. The Commissioner of Uror County Tut Puok Nyang said the attackers were estimated to be between 2,000 and 2,500 youth suspected of being from neighbouring Pibor County. Others estimate the attackers were nearer 3,000 to 5,000 people and were “armed like a regular army.”

A United Nations worker who spoke to IPS on the condition of anonymity said the attackers had several types of weapons including machine guns, AK-47s (a Russian assault rifle also known as a Kalashnikov), anti-aircraft guns and grenades.

The attack was in retaliation of the one the Lou Nuer community from Uror County launched on the Murle community of Pibor County in June. Over 400 people were killed, women and children were captured, and hundreds of cattle were stolen in that attack.

When women and children are captured during these attacks, the women are taken as “wives” and the children are assimilated into the new culture of their abductors and become their children. In both incidents the U.N. Mission in Sudan, which is mandated to protect civilians, and the country’s army, the Sudan People’s Liberation Army (SPLA), did not intervene citing a lack of capacity. There have been increasing calls for government to deploy security forces to prevent a repeat of such attacks.

But Jonglei state Minister of Law Enforcement Gabriel Duop Lam said it was difficult to prevent the attacks “because civilians who possess arms (outnumber) the law enforcement officers.”

“The police and the SPLA do not have the capacity to rapidly respond to such incidents of communal violence. Due to the lack of roads, it could take the army 72 hours to arrive (at) a place where there is insecurity. By the time they get there it (is too) late to apprehend the attackers,” Aluong said.

Aluong recently accused South Sudan’s “enemies” of arming civilians to destabilise the country. During the country’s north-south civil war many people acquired arms. However, there have been reports that the cattle raiders possess new guns, which government believes come from Sudan.

Government claims it has evidence that the government of Sudan supplied weapons to militia groups to destabilise South Sudan, before and after the independence referendum. This is when South Sudan, which has 85 percent of the oil reserves from the two countries combined, voted to cede from Sudan. “Our people do not manufacture weapons in South Sudan. That means someone is deliberately giving them arms and encouraging them to kill each other,” said Aluong.

But many here have blamed the escalating violence on government’s failure to disarm civilians. Nyang said he believed that comprehensive civilian disarmament was the only solution to ending the deadly raids and insecurity in Jonglei state and South Sudan in general.

Ahmed Thurbil lost his relatives in the Aug. 18 attack and criticised government for not disarming civilians after the country’s civil war ended.

“All along the government knew that many civilians are armed but it did not care to disarm them in all these six years. What do you expect idle youth to do? It is obvious that they would be tempted to go and raid cattle,” he said.

Thurbil alleged that the communal violence in Jonglei state and South Sudan has been downplayed by both the state and central government.

Moses Opio, of the U.N.’s Foundation Better World Campaign, told IPS that he believed the failure to disarm civilians was one of the reasons why inter-ethnic clashes would continue to claim innocent lives.

“There has to be systematic disarmament. Anybody who is not authorised to carry a gun should be disarmed without discrimination,” he said. In South Sudan people need a licence to own a gun. However, it is easy to buy a gun without one.

Opio added that the country’s porous borders were also to blame as it is easy to bring guns into the country.

Jonglei state Minister of Parliamentary Affairs Gabriel Gai Riem, who visited the attacked villages of Jokrial, Guanchaat, Pulchuol, Pieri, Tongnyang and Matot, told IPS that he believed the violence could only be prevented through dialogue but said there was a possibility of more revenge attacks.

“It is very difficult to convince people not to (take) revenge after they have lost all these people and cattle,” he said. “But only dialogue will stop (the) violence among communities. We are going to hold a peace conference and several meetings to reconcile the communities.”

Chol Tong, the governor of South Sudan’s Lakes state, which is also plagued by cattle rustling, said communal attacks were rampant because people still clung to their culture, which believes that owning many cattle is “prestigious”.

“People think if they attack other communities and raid cattle they can become prominent,” said Tong. Tong said in order to stop the violence they needed to educate the youth and “show them that you don’t have to have many herds of cattle to be rich.”

He said he would attract investors “to show the local communities that you can still have a few cattle and sell them for beef or process the milk and (become) rich.”

Currently communities in South Sudan do not slaughter cattle, unless they are very old. The only time they ‘use’ their cattle is when they have to pay a bride price.

“This way we will reduce the urge to accumulate many cattle and reduce the motivation to go on cattle raids,” he said.