MBABANE, Aug 11 2011 (IPS) - The standoff between the Law Society of Swaziland and the Judicial Services Commission is negatively affecting women, and their children, who are seeking justice from abuse. 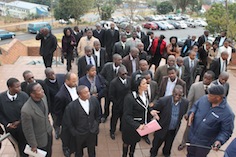 As the lawyers strike in Swaziland continues, cases have stalled in the courts as there seems to be no end to the lawyers’ strike, which started on Aug. 1. Prosecutors and government lawyers are not involved in the strike.

The Law Society of Swaziland (LSS) is challenging the Judicial Services Commission (JSC) to institute a probe against Chief Justice Michael Ramodibedi.

The LSS accused Ramodibedi of sexual harassment against female High Court staff, among other things.

“We have many cases around maintenance which should be processed through the courts. (But) the lawyers representing the women who have filed for the claims are not appearing in court,” said Save the Children Swaziland director Dumisani Mnisi.

Swaziland Action Group Against Abuse (SWAGAA) director Cebile Manzini-Henwood concurred and added that it is disheartening for people who have been violated and victimised to be caught up in the judicial crossfire.

“Even under normal circumstances cases at the courts move very slowly and they hardly reach completion,” said Manzini-Henwood.

She said people whose rights were being violated would lose confidence in the country’s judicial system because of the standoff in the courts. SWAGAA is an organisation that helps victims of abuse, mainly women and children, with counselling and accessing justice.

“We live in a society where the concerns of women and children are not prioritised,” said Manzini- Henwood. “As we speak there are no family courts in Swaziland and every case has to go through the mainstream court process, which has created the backlog.”

As the backlog piles up, Lomcebo Dlamini, the coordinator of Women and Law in Southern Africa, thinks the fragile justice system is crumbling.

“There is a lot that is not right with the administration of justice in the country,” said Dlamini. “This boycott is adding to the burden.”

The LSS accused Ramodibedi of interfering with the judicial process after he suspended High Court judge Thomas Masuku for alleged misconduct. The LSS argued that Ramodibedi had no jurisdiction to suspend Masuku because King Mswati III, through the JSC, appoints judges. (This southern African nation is ruled by the monarchy and political parties are not allowed to contest for power.)

Ramodibedi levelled 12 charges against Masuku, which includes a charge of insulting the King. Masuku is alleged to have done this when he passed judgment earlier this year on a case between Mkhindvo Maseko and the country’s Commissioner of Police. The police had allegedly seized 32 herds of cattle from Maseko without a court order as they allegedly belonged to the King.

In his judgment Masuku had said the King could not violate the same laws he expected the nation to uphold.

Many have seen the charges against Masuku as absurd. Masuku was also accused of insubordination against Ramodibedi for allegedly threatening to resign. And Masuku was even accused of having an affair with a female High Court judge.

Masuku’s disciplinary hearing was held in camera on Aug. 11 and judgment was reserved.

The suspension of Masuku has also affected his cases.

The residents of Madonsa township in Manzini, the commercial capital, protested at the High Court demanding his reinstatement as he was about to pass judgment on their case.

The residents are facing eviction after a company, Tisuka Taka Ngwane, claimed it owned the land they lived on.

“This matter has dragged on for too long,” said Themba Mamba, one of the affected residents. “It has been through many judges and just when Masuku was about to pass judgment, he got suspended.”

He said while litigation is very expensive, the process is also not smooth and clear and it was why many people failed to get justice.

“Right now we have this axe hanging over our head,” said Mamba. “What if Tisuka (Taka Ngwane) were to come and kick us out tomorrow when the lawyers are on strike? Who will defend us in court?”

Ramodibedi has neither acknowledged nor responded to a petition by the residents.

The JSC, chaired by Ramodibedi, refuses to take action against him arguing that the LSS was supposed to direct its complaint to King Mswati III because constitutionally he appoints the country’s judges.

“The Judicial Service Commission is deeply concerned about the fact that, according to credible evidence in its possession, some of your members (of the Law Society) have been touting staff members at the High Court to falsely implicate the Chief Justice in the sexual harassment charges,” wrote Hlophe.

Ramodibeni has refused to answer questions from the Swazi media but poured out his heart to the Lesotho press where he denied the LSS’ allegations. He further accused Swazi lawyers of being xenophobic by referring to him by his nationality. He is a Lesotho national.

The boycott, however, goes on with the LSS now intensifying their stance by refusing to work for clients who want to register bonds with the country’s banks.

Prime Minister Sibusiso Barnabas Dlamini has appealed to the lawyers to allow the law to take its course regarding the charges against Masuku.