HARARE, Aug 3 2011 (IPS) - The four armed robbers who gang raped her may be serving time for their crimes, but six years later justice has turned out to be a myth for Mildred Mapingure. 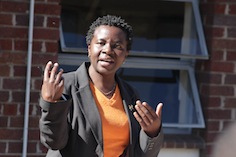 “No post-exposure prophylaxis for HIV was administered to me and there was no ‘morning-after pill’ to prevent pregnancy. I was tossed from office to office, meanwhile I was silently praying I was not pregnant,” Mapingure told IPS from her rural home in Mashonaland West, Zimbabwe.

It is illegal to terminate a pregnancy in Zimbabwe unless the ‘pregnancy endangers the life of the mother and/or is a result of unlawful penetration (rape)’, according to the Termination of Pregnancy Act. And abortion is only allowed in the first trimester.

When Mapingure realised the inevitable had happened two months after being raped, prosecutors rushed the application for a termination of pregnancy order through the Chinhoyi regional magistrate’s court in Mashonaland West.

But long court delays resulted in the order being granted when she was eight months pregnant. Mapingure had no option but to give birth.

Four years later, and with the assistance of the Zimbabwe Women Lawyers Association (ZWLA), she has sued government for 52,000 dollars for wrongful birth and child maintenance.

“Until now, I am still waiting to hear the outcome of my case. And as my boy is growing up, his needs are also increasing. I am unemployed and not married but am still expected to provide for him. I haven’t paid this term’s school fees,” said Mapingure.

She declined to discuss her feelings for her son at length, insisting she loved him despite the circumstances surrounding his conception.

But Mapingure’s case is not the only one of failed justice in this southern African country.

Director of ZWLA, Emilia Muchawa, told IPS that for anyone to access justice in Zimbabwe, resources and family support are paramount.

“In any jurisdiction, adequate finances are key for one to access court justice. In Zimbabwe, it is even more difficult for women to access justice because women neither have those resources nor do they have access to free legal aid. Courts are far-spaced making it worse for women seeking to get justice for whatever wrong they have suffered,” she said.

She said the few brave women who have approached the courts for justice are hardly represented, while the men they seek justice against have legal representation because they can afford to hire lawyers.

“Court procedure and court language are a hindrance to women in Zimbabwe, the majority of whom are less educated than men. We have received reports of women who have been turned away at the entrance, before they have even lodged their cases, by mere court guards,” Muchawa said.

Women are required to go to a magistrate’s court for maintenance order applications, the distribution of a deceased’s estate, custody and guardianship of minor children, and protection orders. Divorce and property distribution is done at the High Court

“After being turned away for simple things like court dress code (for wearing jeans, slacks, short dresses), most women never come back again. And because the courts are far removed from the general populace, bus fare becomes a hindrance,” said Muchawa.

She said a woman’s family had to be supportive but, because of cultural beliefs and a conservative upbringing, most women face resistance when they seek justice through the courts.

In May a law officer in the Attorney General’s office, Wallen Chiwawa, accused his wife (whose name cannot be published because of a court order) of infidelity and physically tortured her.

However, ‘after a dialogue between their families’ she withdrew the charges.

“The case of Chiwawa’s wife is a good example of how women are pressurised by their families or communities to let culprits off the hook. Because of the docility of women, cultural pressures have presided over injustices they suffer mostly from these same families,” said Muchawa.

Deputy Minister for Women’s Affairs Fungayi Jessie Majome, who is also a member of parliament and practicing lawyer, told IPS that court procedures and court officials who “carry patriarchal baggage remain a challenge for women who use courts to seek justice.”

“Babies and children are not allowed in court. And most women who seek justice at the courts have suckling babies or toddlers whom they can’t leave alone,” the deputy minister said.

She said she once represented a physically abused woman who ran away from her husband with her twin 10-month-old babies.

“She was not allowed in court with her babies as she sought a protection order. And this is just one woman who had me as a lawyer. What happens to the rest of the women like her?” asked Majome.

Besides that, women are required to pay administration fees to obtain protection orders in Zimbabwe. And in a country where, according to the World Bank, 96 percent of people are unemployed, this is difficult.

A protection order application form consists of 17 pages and an applicant is required to make four copies of it. The cost of photocopying that document and the additional five-dollar duty stamp ensures that legal protection for abused women remains a pie in sky, said Majome.

She said some court officials, including magistrates, are also a hindrance to women seeking justice.

“In early 2000 I handled two cases of a teenage girl and middle aged woman who had been raped and fell pregnant. The magistrates who heard the cases separately kept delaying granting (the) termination orders.

“The Termination of Pregnancy Act gives magistrates exclusive discretionary powers to order termination and I think sometimes these powers are abused to serve personal beliefs and convictions at the disadvantage of the affected women,” she said.

But she said government plans are at an advanced stage to set up a family court that would be sensitive to women.

“You will hear the presiding officer chastising a woman during a (domestic violence) trial (saying) ‘I have no time for tears.’ That alone can ensure women don’t come to court seeking justice,” said Musanhu.

Research conducted by Women and Law Southern Africa (WLSA), an organisation dealing with human rights, showed that women are frustrated by financial, geographical, cultural and social factors in using the higher echelons of the courts.

“Problems emanate from the structure and nature of (the court) system in its form. Maintenance matters, domestic violence and administration and distribution of deceased estates remain the major points where women seek justice,” said WLSA national coordinator Slyvia Chirawu.