GHANA: The Abandoned Offspring of Oil

TAKORADI-SEKONDI, Ghana, Sep 22 2011 (IPS) - Kobina’s legs are dappled with scars. He gets them flitting across the beach in Sekondi, in southwest Ghana, slipping in the soot-black mud and clambering over pirogues slippery with fish guts, only to sell a sachet of water or a freshly peeled orange to fishermen working on the shore. 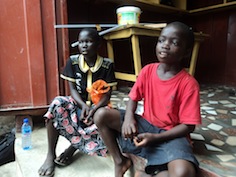 He is a child: just 10 years old. But he earns a living selling food to locals.

Comfort Essuman keeps him company, roaming the area selling porridge and deep-fried sugar bread. Two years older than Kobina, she is less shy and more confident. Whereas Kobina will not offer his last name, Comfort readily pronounces hers.

“My mum says I should keep selling and that I will go to school later,” she says, adding that she has not been to school since grade three. “I sell not less than two Ghanaian cedi (just over one dollar) a day and send the proceeds to my mother.” She lives with her aunt, while her mother is in Central Region, one of the West African country’s 10 regions.

Kids like Comfort and Kobina are all over this Western Region metropolis. They are the skinny and scuffed cherubs of Takoradi’s heralded oil era, a newborn epoch that residents say is bringing more trials than triumphs.

Takoradi and Sekondi are the twin capitals of Ghana’s Western Region with a population of about 335,000. Once just sleepy fishing hollows, they were galvanised late last year when the region started producing oil from the offshore Jubilee field. The Ministry of Energy predicts 250,000 barrels per day by the end of the year, with a quarter century total of one billion barrels. And other finds from nearby fields are expected to come online in 2014.

Lured by news of oil-driven prosperity, newcomers arrive in droves, each expecting an employment boom that is yet to come. In the meantime, rent goes up. The cost of food increases. Traffic builds. And social malaise multiplies. It is a hydra-headed problem and many of its victims are children, says Deborah Daisy Kwabia, metropolis director for the Regional Department of Social Welfare.

“A lot of people are streaming into Takoradi-Sekondi in pursuit of greener pastures, whereby it doesn’t exist,” she adds. “It’s voluminous. It’s even increasing.”

For children, marginalisation takes two forms. The first is child labour, which can impact girls and boys differently. Older men may train boys to run drugs or steal from shoppers in Takoradi’s crowded Market Circle. Girls, meanwhile, might cook or wash dishes in ramshackle eateries called chop bars. Or they might move into someone’s house and become a maidservant.

The second is prostitution.

The Zenith Hotel is the seat of downtown Takoradi’s nightlife. It is a bright red building next to a taxi station, and food hawkers crowd its corners late into the evening. Inside, men sip alcohol in a gloomy courtyard while prostitutes cruise the tables.

“Those ones aged 12 to 15, they are a different group,” Gerning says. “They are called the Thousand Girls. They charge cheap because they are kids.”

The name is a reference to Ghana’s old devalued currency. Ten Ghanaian cedi (six dollars) used to be 1,000 Ghanaian cedi. And it is what the girls charge. Apart from the Zenith, child prostitutes are said to haunt the Harbour View bar and the beaches of both Takoradi and Sekondi.

“Before you get to them, you have to pass through some grown-ups,” Gerning says. “They will collect the money from you and show you the place. It is someone’s business.”

This happens despite the existence of Ghana’s 1998 Children’s Act. Its clauses rail against child exploitation.

The act mandates the metropolis’ Social Services Sub-Committee to enforce its labour provisions. No one under 18 is allowed to do hazardous work, like going out to sea. No one under 15 is permitted to do manual labour. And light work is not allowed for anyone under 13. The committee can conduct investigations and recommend police action.

John Davis, representative for the metropolitan electoral area of West Anajy, has been the head of the committee for three months. Though he is aware of both child prostitution and labour in the metropolis, he says there have been no investigations under his tenure, and he is not aware of any conducted by the previous committee.

Davis is not able to offer any statistics at all, though he says assembly members were asked a month ago to gather information in their constituencies.

“We have not given any resources to do it,” he admits. “No resources in terms of vehicles or whatever.”

Instead, the committee will focus on an “education campaign”, speaking about the issue on the radio and elsewhere in public.

A lack of resources characterises much of government’s efforts in upholding the Children’s Act.

Kwaku Agyemang Duah, head of Community Care programmes with the Regional Department of Social Welfare, says the department has about 30 officers at its disposal. It needs a minimum of 80.

They also need a shelter for kids with no homes. The nearest one is four hours away in Accra, the country’s capital. And even if there was a shelter, they would need funds for feeding children as well as general maintenance.

“We present a budget every year,” he says, “but what comes out of it is a different story.”

Duah points to his office as a microcosm of the department’s financial straits. The floor looks like a warehouse. He has a desk and a filing cabinet and some rickety chairs. He has no computer and no office phone. The regional director’s office next door is only marginally better.

“I see it as a problem in developing countries,” says Peter Twineboa-Kodua, the regional director at the department. “We have not gone so far to look at the development of the individual as a human resource. Other (government) agencies on the financial side, they get everything they want. You can see their target. But child health, you cannot see the target.”

Unencumbered by bureaucracy, the Mercy Foundation has been able to make strides in addressing the problem. In the days before oil, when child labour was more a result of parents migrating to Ivory Coast to work in those fishing communities, they ran a school that involved 400 at risk children. It was funded by a World Bank grant that ran dry in 2004.

Smaller donations make other projects possible, however. Children have been re-integrated into the government schooling system. Those who were too de-institutionalised were taught vocations.