TECOLUCA, El Salvador, Sep 30 2011 (IPS) - The guavas grown by Mariana Rosales are big and bright green, and the best thing about them, she says proudly, is that she does not spend a single cent on fertilisers to produce them – something extremely rare in a country like El Salvador. 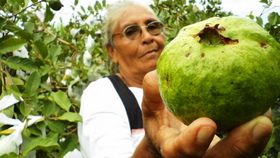 It is no longer easy for Rosales, 64, to bend down to collect the cow manure, leaves and other biodegradable materials she uses to produce the organic fertiliser used in her garden. But her enthusiasm for sustainable farming gives her the energy she needs.

“I still have the strength to continue growing my veggies and fruit,” she told IPS. Besides guavas, Rosales grows beans, corn, cucumbers, ayote (a kind of squash), rice, mangos, lemons and other crops – all organic.

She is part of a women’s collective that for the past four years has been involved in organic farming in the fields around the town of Tecoluca, 73 km east of San Salvador in the central province of San Vicente.

The area forms part of the Bajo Lempa region in the hot lowlands of El Salvador, which is regularly hit by floods and is seeing more irregular rainfall patterns year after year, as a result of climate change. Harvests are often ruined, which drives up the prices of staple foods like corn and beans.

That makes it even more important for Rosales to be able to grow her own food – and it is even better if she can do so in a sustainable manner, in harmony with the environment. That is the objective of the project organised by the Popular Movement of Organic Agriculture (MOPAO), which groups 17 local and national organisations.

One of them is the 500-member Municipal Association of Women from Tecoluca, that is working hard to boost self-sufficiency in food, which gives them greater economic autonomy.

“We also want to fight against many kinds of inequality,” said Tobías, who is raising her four children on her own.

The association’s project promotes a central role for campesinas (peasant women) in family decision-making about what crops to grow, and how, as well as greater participation in the benefits. The members also put a priority on sustainable agriculture – and are running into heavy resistance from their husbands and other men in their families and communities.

Modesta Pérez, 36, had a hard time convincing her family of the benefits of using organic fertiliser. “My father-in-law and my partner told me: ‘look, that little bit of dirt that you put on the crops doesn’t do any good’, and I answered, ‘it’s not dirt, it’s organic fertiliser’,” says Pérez, who grows corn and kidney beans on rented land.

Now the men in her household and her community have found that organic agriculture works and provides them with greater autonomy, she tells IPS on her farm, filled with pride.

Food security and sovereignty is hard to achieve in a country where agricultural production is at the mercy of drastic climate variations: either the rain pours down and the crops rot in the fields, or there is no rain at all and they dry up.

For instance, the “El Niño-Southern Oscillation” (ENSO) weather cycle, a warming of the Pacific Ocean surface waters that periodically affects global weather patterns, caused a shortage of rain in Central America in September and October 2009.

That hurt the year’s second harvest in much of Nicaragua, Guatemala, Honduras and El Salvador, the United Nations Food and Agriculture Organisation (FAO) reported.

Then Hurricane Ida, whose rains lashed part of Central America in November of that same year, caused millions of dollars in damage to agricultural infrastructure.

In May 2010, serious damage to crops was once again caused by Tropical Storm Agatha in Guatemala and El Salvador.

To feed its population of 5.7 million people, El Salvador has to import beans, a staple part of the local diet, from Nicaragua, and more recently from China.

At times of scarcity, the price of beans rises threefold, to 1.50 dollars a pound, in a country where 40 percent of the population lives on less than two dollars a day and 19 percent on less than one dollar a day, according to United Nations figures.

FAO statistics show that 22.7 percent of the economically active population in the country is engaged in agriculture, while 9.6 percent of women formally participate in farming – an underestimate because many work on the family farm, but are not counted.

“Now that beans are so expensive, I’m eating the ones I have grown myself,” Rosales says.

An important part of the project in Tecoluca is promoting the use of native seeds, to avoid dependence on hybrid or genetically modified (GM) varieties.

The “agroservicios” or privately owned retail farm stores that abound in this country sell hybrid seeds as part of a marketing strategy imposed by transnational corporations like the U.S.-based agriculture biotechnology giant Monsanto.

GM seeds are only good for one harvest as they cannot reproduce themselves, which makes it necessary for farmers to buy new seed each year in the agroservicios.

But with native varieties, farmers save the best seeds from the harvest to use for the next planting season, and are thus free from dependence on corporations for their seed stock. However, native seeds have virtually disappeared on the Salvadoran market, where hybrid varieties have a monopoly. Only a limited number of farmers, in different parts of the country, still grow the traditional varieties.

“We want to set up a native seed bank and are coordinating efforts with farmers from other parts of the country, to get them to provide seeds,” said MOPAO coordinator Tobías.

Cayetana López, 39, is in charge of the production and sale of the association’s organic fertiliser. In her yard she has set up an improvised shed, where 30 bags holding 80 pounds each of compost were piled, ordered by a local farmer, when IPS visited

“We produce it ourselves, according to demand,” which she said is still low because farmers have used chemical fertilisers for decades and are still sceptical with regard to the organic kind.

“It will take some time for people to accept the benefits of organic agriculture. The idea is not for them to abruptly change the way they grow things overnight; the change will be gradual,” she added.

Besides the health advantages of not consuming farm products grown with chemical fertilisers, there are economic benefits for the farmers.

Both consumers and producers benefit from organic agriculture, and the planet benefits even more, Ricardo Navarro, with the Salvadoran Centre for Appropriate Technology (CESTA), told IPS.

He noted that chemical fertilisers contain nitrogen, an excess of which goes into the atmosphere, as well as rivers and the sea, where it fertilises algae blooms that deplete oxygen, creating dead zones.

“The use of chemical fertilisers has negative environmental repercussions…and these women are doing the planet a world of good with their organic farming,” the environmentalist said.

The members of the association thus grow aloe vera, which was traditionally used to help restore the digestive system. They also grow mint and other curative plants, and produce honey and biogas.