DHAKA, Oct 18 2011 (IPS) - Reducing poverty in Bangladesh will depend critically on sustaining the successes of the country’s microcredit (MC) programmes, says Muhammad Yunus, the economist who shared the 2006 Nobel peace prize with his creation, Grameen Bank. 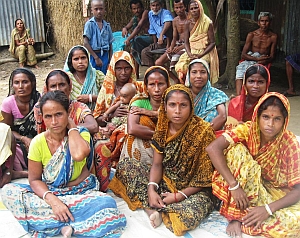 “Microcredit programmes play an important role in achieving the United Nations Millennium Development Goal-1, that calls for reducing poverty by half by 2015,” Yunus told IPS in an interview.

But, Yunus, who was controversially removed as Grameen (rural) Bank’s managing director in March, said there were worries about the future of his brainchild. “We all do hope that Grameen will be able to operate the way it has all these years, but are not sure if it will be able to do so.

“Whatever happens,” Yunus said, “we must stand up to protect the rights of the eight million women owners of Grameen, who own 97 percent of its shares and be allowed to choose how their bank shall operate.”

But, the mood is upbeat at the state-run MC organisation, Palli Karma Shahayak Foundation or PKSF, which loans billions of dollars annually to roughly 250 active partner organisations (POs) which improved their lending by 15 percent this fiscal over the last one.

In turn, lending to clients increased by 12 percent in the corresponding period. This fiscal, PKSF alone disbursed over 2.6 billion dollars worth of loans to small microfinance institutions (MFIs).

“We have requested our POs not to keep deposits of more than 10 percent of disbursed money in the commercial banks and so money keeps rolling in the rural economy,” Ahmed said, explaining the strategy.

Ahmed said the demand for MC was such that PKSF encourages POs to “disburse as much as possible to see more income generation activities, employment and business.”

The largest MFIs – Grameen, BRAC, ASA, Buro Bangladesh and Proshika – that account for 85 percent of more than 20 million borrowers are ever expanding. On an average, loan disbursements by these giants have grown from six to 12 percent per annum over the past few fiscals.

BRAC’s chief financial officer S. N. Kairy told IPS that his organisation’s projected growth of 15 percent has been achieved almost every year. However, there has been a five percent drop this fiscal as subsidies for the hardcore poor are no longer encouraged.

“We have had very good growth over the years. In fact, it often crosses our expected annual growth rate of 15 percent, but there is a drawback of lesser borrowing and lesser IGAs,” Kairy said.

The success of MC in Bangladesh is vital to the concept because institutional microfinancing was born in this country in the early 1970s when Yunus founded Grameen, now the biggest non-governmental organisation in the world, and nurtured it by lending small amounts to the poor without any security.

Through the late 1970s Grameen and other MFIs grew at a steady pace, addressing the financial needs of the poor, especially the neglected and poorest segments of the society – women who are known to efficiently manage funds given the opportunity.

MC, handled by groups of women standing guarantee for one another and building on trust, encouraged Bangladesh’s conservative society to take to IGAs and stimulate the rural economy.

After four decades of MC operations, women control the rural economy and are better empowered than ever before to take decisions for themselves and for their families. Some 95 percent of the borrowers are women.

Such an approach not only removed poverty but also reduced inequalities, illiteracy, child mortality, hunger, unemployment, diseases, and most importantly, dependency on traditional village moneylenders. Many of these issues could never have been addressed by state agencies.

Microfinance gurus like Yunus say collateral-free loans and micro-savings by women are keys to the success of MC in Bangladesh, a least developed country (LDC) with high population density, low resources and frequent natural calamities.

With a population of around 150 million, Bangladesh also has the world’s highest population density with 2,200 people per 2.58 sq km. As an LDC Bangladesh’s gross national income per capita is less than 905 dollars.

Recent studies, including those by the World Bank, the World Development Report and the Asian Development Bank acknowledge that many of the poorest borrowers in Bangladesh have come out of poverty through MC.

Wahiduddin Mahmud, chairman of the Institute of Microfinance in Dhaka and a member of the U.N. Committee for Development Policy, told IPS: “MF often makes the difference between survival and destitution. There is evidence that borrowers can break out of poverty through accumulation of physical and human capital.”

Mahmud added that while MC is steadily growing in Bangladesh, there was a need for tighter regulation to check such anomalies as overlapping credit by different providers.