WASHINGTON, Oct 21 2011 (IPS) - Dr. Rick Steketee, science director at the Malaria Control Partnership at PATH, a leading nonprofit organisation dedicated to public health in the Pacific northwest city of Seattle, isn’t alone when he says that elimination of the infectious disease is a possibility. 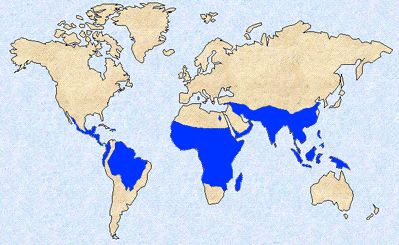 In the so-called malaria belt centred around the Equator, the disease is often transmitted year-round. Credit: U.S. CDC

But Steketee and his colleagues at PATH are making some assertions that, 20 years ago, would have seemed outlandish: malaria can be eliminated in Africa, mostly leveraging current tools and strategies that are available now.

“This is not about a dichotomy of waiting for new tools versus using what we have today, because we have some really good tools today,” Steketee told IPS. “It’s about saying we shouldn’t just be waiting for some tool to come along to be a total solution.”

The 2011 Malaria Forum hosted by the Bill & Melinda Gates Foundation in Seattle was ground zero this week for optimistic news on the disease that kills nearly 800,000 people per year, mostly children and more than 85 percent in Africa, according to the World Health Organization (WHO).

By far the biggest announcement out of the 2011 forum was the results from clinical trials that could potentially produce the first ever vaccine for malaria, a drug known as RTS,S, which could reduce children’s risk of infection by half.

But a huge component for this year’s forum was the resurgence of the “elimination” idea, which Bill Gates, the founder of Microsoft, first proposed four years ago at the 2007 forum.

“To achieve elimination and eradication, we need to start with control, drive it up to very high levels, and sustain it,” Bill Gates said in a speech at the forum on Tuesday, adding that it was a goal that could be achieved in his lifetime.

Elimination of a disease refers to the reduction of a disease’s prevalence in specific areas to zero, while eradication means zero cases worldwide. So far, smallpox is the only disease that has been successfully eradicated.

Steketee agreed that the possibilities for elimination were encouraging, given existing interventions such as long-lasting insecticide-treated nets, indoor residual spraying, diagnostics and anti-malarial medicines.

“We need to build both the systems for prevention and for treatment,” Steketee told IPS. “Let’s build a buffer and go after it.”

To do this, he argues, along with colleague Carlos Campbell, in the October 2011 issue of The American Journal of Tropical Medicine and Hygiene that leveraging existing interventions with an evolutionary strategy is key, taking the most effective efforts and combining them with a scale-up for impact (SUFI) approach, which factors in growth for initiatives.

The paper lays out specific goals, such as ensuring prevention and treatment tools are reaching every person at risk by improving delivery and management of initiatives, and, ultimately, reducing the transmission of malaria by focusing on the parasites in infected people.

The immediate results seen from current interventions – for example, child infections and mortality were reduced within one malaria season with treated bed nets – left experts wondering what else could be achieved.

“It left us emboldened to set elimination as a goal, and eradication as a consequence of that,” Steketee told IPS. “How far could we go with existing interventions versus waiting for some new tool to come along.”

The newest tool – a potential vaccine for malaria – was something that took the media and malaria advocates by storm this week, but already sparked some controversy.

This week’s announcement has some wondering how soon a vaccine will be made available, and how best to integrate it into the current strategy to battle malaria. And the question of who will pay for not only the development of the vaccine but its implementation looms large.

“This is likely to be a potential tool that could be available to us within a few years, and people are already looking into what it would take to add it to the current set of interventions,” Steketee told IPS. “It’s not just a tool that would replace something else, but would add value to the existing package of what we’ve got.”

But, he warned, breakthrough technologies like this are not the be- all, end-all solutions for public health programmes like those combating malaria, particularly because they take so long to come about.

“It’s important to highlight the fact that this (potential vaccine) has been nearly a quarter of a century in development,” he said.

Public health programmes are often a Catch-22 of sorts – health goals compete for resources and support, and who is to say that preventing malaria is more important than, say, preventing tuberculosis – and the victor usually is the one with the best strategy.

“Particularly when economies start to take a dive, it’s ‘how many resources do I have? What do I provide to people?'” Steketee said.

Resources for public health programs are stretched thin across the board, but a strong alliance which works not only to actually implement interventions, such as bed nets for malaria, but also in uniting goals, is usually the most successful.

The global campaign to combat malaria, through efforts like the Roll Back Malaria Partnership (RBM) under the auspices of the WHO, is an example of a united front against a health hazard that experts say offers valuable lessons.

“How do you move from that campaign into a stronger system that is a routine, and that’s solid in delivering services to all who need it,” Steketee told IPS.

As the scale of objectives change, Steketee said, often growing to include more services, or new partners, the tactics of a campaign need to change as well.

“All the way along we need to be tweaking that focus,” he told IPS.

In his paper, Steketee argues that the strategy that has been adapted for malaria elimination in the past decade has been an evolutionary one, requiring significant investment on multiple fronts, and one that acknowledges that there is no quick fix.

“It’s a core of public health – find those things which work, and don’t just do it once and walk away from it,” he told IPS. “You could pick any disease, any environmental concern you care about and want to fight against, and that sentence still applies.”