TRADE: Developing Countries Out in the Cold at WTO

GENEVA, Oct 14 2011 (IPS) - Developing countries, particularly from Africa, are concerned about attempts by industrialised nations to change the negotiating dynamic of the World Trade Organization. 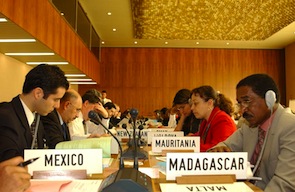 They are worried that developed countries want to introduce new issues at the multilateral body’s eighth ministerial meeting later this year without first completing the unfinished Doha agreement.

The Doha Development Agenda (DDA) trade negotiations, launched in 2001, were meant to correct the historical imbalances and asymmetries in the global trading system and were designed to enable poorer countries to integrate into the system.

Industrialised countries are insisting on negotiating new controversial issues like investment, competition policy, energy security and climate change, often referred to as 21st century issues, without concluding the old issues of duty-free and quota-free market access. The WTO eighth ministerial meeting will take place from Dec. 15 to 17 in Geneva, Switzerland.

Over the last few weeks, developed countries from North America and Europe launched a campaign to alter the WTO’s negotiating framework from a multilateral format, where all members have a say in an agreement, to a plurilateral one, which would restrict participation to select countries.

The developed countries argue that “the business as usual approach” involving every member at the WTO will not work.

“The African friends seem to have a problem with regards to new issues and the plurilateral approach,” said Ambassador Luzius Wasescha, Switzerland’s trade envoy to the WTO.

“If these new issues are not discussed at the WTO, members will discuss them outside and they (the African countries) will regret (such a move),” he told IPS.

The discontent comes at a time when WTO Director General Pascal Lamy wants the theme of the upcoming ministerial meeting to be “WTO: the institution that delivers.” However, trade officials from developing countries question whether the organisation and its powerful drivers have actually delivered on the promises made in the DDA.

“It’s a joke to consider such a theme when the credibility of the global trade body is at its nadir when it comes to addressing the concerns of poor countries,” said an African trade diplomat who preferred anonymity.

Developed countries want their issues on the Doha agenda to be addressed first and let the remaining issues, which concern poor countries, die a slow death, said the diplomat.

Effectively, industrialised countries want to close the window on addressing the “developmental” dimension of the DDA in which African countries invested considerable political capital.

“Instead of addressing the duty-free and quota-free market access, removing trade-distorting farm subsidies on cotton and other products, and enabling the poorest countries to enjoy the benefits from global trade, some countries are now insisting on 21st century issues,” said Ambassador Faizel Ismail, South African’s trade envoy to the WTO.

“What is the point in embarking on 21st century issues without first concluding the negotiations of the 20th century issues that are relevant to the poorest countries in Africa and elsewhere?” the Mauritian trade envoy to the WTO, Ambassador Shree Baboo Chekitan Servansing, is understood to have asked the chair for the WTO’s General Council, Ambassador Yonov Frederick Agah of Nigeria, during an informal consultation. Agah is overseeing the preparations for the eighth ministerial meeting.

Servansing, who is the coordinator for the Africa, Caribbean, and Pacific countries at the WTO, wants implementation, trade and development issues concerning enhanced flexibilities for developing and poor countries, which arose from the previous Uruguay Round, resolved.

Developed countries, however, are not convinced. In a confidential letter written to many trade ministers, and obtained by IPS, Australia’s Minister of Trade Craig Emerson fired the first salvo by calling for a “new pathway to global trade liberalisation” prior to next month’s G20 meeting in Cannes, France. The G20 is a group of the world’s most powerful countries.

Emerson’s approach insists on an early realisation of select issues in the DDA negotiations based on a plurilateral framework and parallel negotiations on new issues.

While the letter speaks of some concessions for the poorest countries, the thrust of the document is on bringing new issues and new approaches that are “antithetical” to the multilateral negotiating principles underlying the 153-member WTO.

Emerson said in his letter “the Doha agenda is large and complex, with many entanglements between issues, making it impractical to achieve progress.” But “some parts of the Doha (agreement) may be more easily resolved and we should be permitted to advance those issues.”

“The Geneva meeting could therefore agree to continuing negotiations with the idea of early implementation where achievable,” Emerson continued. “This approach would also need to consider finding alternative negotiating approaches to those issues which have become the most intractable, and in particular market access.”

Referring to new issues such as competition policy, investment, climate change and energy security, the Australian trade minister urged his colleagues “to contemplate agreement on the negotiation of identified issues, but beyond the existing Doha mandate.”

“This would offer a mechanism to modernise the WTO’s work and to ensure it keeps pace with the demands of the modern global economy,” Emerson suggested.

Though African and other countries oppose the Australian approach, developed countries have solidly supported the move.

“Why should African countries agree to new approaches?” asked Martin Khor, the executive director of the Geneva-based South Centre, which represents the interests of the poor countries.

“Under the pretext of bringing new issues as well as selectively picking up issues of interest to them from the Doha agenda, industrialised countries want to say good bye to the DDA once and for all,” said the African trade diplomat.

He said the theme for the ministerial meeting should be “WTO: the more it changes, the more it remains the same,” implying that industrialised countries continue to have their way at the trade body.