HARARE, Jan 7 2012 (IPS) - Alec Marembo has built his family fortune making bricks in Dzivarasekwa, a sprawling high-density suburb north of the capital of Zimbabwe. But due to the economic crisis of the last decade, his fortune started crumbling. Although he could break even when the downturn started, he finally gave in to competition from the Chinese. 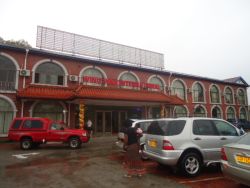 “I don’t understand how our government can allow the Chinese to come here and take over small jobs that we consider family ventures and pass them on as investment,” Marembo told IPS as he gazes into the distance where a new Chinese brick factory lies.

The government of President Robert Mugabe introduced the “look east” policy in 2004, after top government officials and state companies were slapped with sanctions by the UK, the United States and other western countries for alleged human rights abuses.

The policy has encouraged China and other Asian countries to invest in Zimbabwe, which they have done without attaching any conditions in the manner of trading partners in the west.

Times have been hard for many Zimbabweans due to the closure of a number of industries caused by the crippling economic crisis.

So when Chinese investors started arriving they were welcomed with open arms. But the trade relationship is now raising questions.

“The Chinese, like any other investors, are welcome but they have to come and build industries which will offer people employment,” Thulani Mkwebo, a small shop owner in downtown Harare, told IPS. “If I had a choice I would drive them out.”

Resentment against the Chinese can be felt in many parts of Zimbabwe.

They were protesting bad labour practices ranging from physical abuse to irregular working hours and low wages pegged at four U.S. dollars a day – far below the rates set by the Zimbabwe National Employment Council (ZNEC) for the construction industry, which are between 1.00 and 1.50 dollars an hour.

The company is building a 98 million dollar military college just outside Harare, financed with a Chinese loan to be repaid with diamonds.

AFECC is mining diamonds in eastern Zimbabwe, in partnership with the Zimbabwean military, according to the Ministry of Mines.

The Chinese have many interests in this southern African country. But the retail sector, mining for diamonds and minerals, construction, manufacturing and agriculture are the main attractions.

This country’s exports to China are largely in the form of raw materials, with tobacco and minerals being the main products, while Zimbabwe receives loans and various finished products – most of which are popularly referred to here as “ZhingZhongs” (poor quality products).

But this has not deterred the Chinese, who have set up small businesses pushing locals, particularly cross- border traders, out of business as they cannot compete with cheap Chinese products.

Mara Hativagone, a former president of the Zimbabwe National Chamber of Commerce (ZNCC) and chairperson of the Zimbabwe Investment Authority (ZIA), said the Chinese should not compete for the downstream industries traditionally reserved for locals.

“We want to see more technology transfer from foreigners. They must not come here and do all sorts of funny things, taking advantage of the existing relationship between the two countries,” Hativagone told IPS.

“There is no way Zimbabweans can compete with the Chinese, because they use cheap labour and mass produce while half the time we have no water and electricity in our industries to produce,” she said.

She also accused the Chinese of being cheats. “Sometimes the Zimbabwe Investment Authority gives them manufacturing licenses, but they go and open restaurants under such big Chinese names as Wing Wah International Hotel and Shangri-la,” she said.

Zimbabwe’s ambassador to China between 2002 and 2007, Chris Mutsvangwa, who now runs MONCRIS, a consultancy firm which helps people from China set up businesses in Zimbabwe, said he does not expect the Chinese to flood business opportunities reserved for locals.

“Any end of the industry anywhere in the world should be reserved for locals. I would not expect Zimbabweans to go to China to compete with the Chinese in small businesses, and I don’t expect the Chinese to do the same,” Mutsvangwa said.

“The Chinese have to come and exploit other areas where we have a shortage, but we should not completely bash them but look at other things that they have done for us. They have helped offer competition for the Americans, and now the girlfriend has another boyfriend.”

Beijing is aware of the jitters and has warned against undoing the existing relationship.

“China understands the need for indigenisation and empowerment but we hope Zimbabwe will protect the legitimate right of Chinese businesses in the country,” Chinese Vice Premier Wang Qishan told the media during a visit to Harare last year.

But there is also popular support for the Chinese doing business here.

“The Chinese are welcome, we love them, they bring us cheap goods, and whoever says they don’t want them should first create jobs for us,” said Zvikomborero Moyo, a hair and clothing boutique worker in downtown Harare. “With Chinese help, we can start businesses, we buy from them very cheaply and resell in the suburbs and that way we are able to make a living.”