WASHINGTON, Feb 11 2012 (IPS) - An analysis by Lt. Col. Daniel Davis, which the U.S. Army has not approved for public release but has leaked to Rolling Stone magazine, provides the most authoritative refutation thus far of the official military narrative of success in the Afghanistan War since the troop surge began in early 2010. 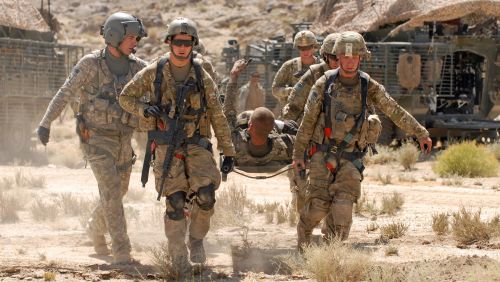 U.S. Army Pfc. Shawn Williams is evacuated after being injured by a roadside bomb in Kandahar Province on June 17, 2011. Credit: DoD photo

In the 84-page unclassified report, Davis, who returned last fall after his second tour of duty in Afghanistan, attacks the credibility of claims by senior military leaders that the U.S.-NATO war strategy has succeeded in weakening the Taliban insurgent forces and in building Afghan security forces capable of taking primary responsibility for security in the future.

The report, which Davis had submitted to the Army in January for clearance to make it public, was posted on the website of Rolling Stone magazine by journalist Michael Hastings Friday. In a blog for the magazine, Hastings reported that “officials familiar with the situation” had said the Pentagon was “refusing” to release the report, but that it had been making the rounds within the U.S. government, including the White House.

Hastings wrote that he had obtained it from a U.S. government official.

Contacted by IPS Friday, Davis would not comment on the publication of the report or its contents.

Writing that he is “no Wikileaks guy Part II”, Davis reveals no classified information in the report. But he has given a classified version of the report, which cites and quotes from dozens of classified documents, to several members of the House and Senate, including both Democrats and Republicans.

“If the public had access to the classified reports,” Davis writes, “they would see the dramatic gulf between what is often said in public by our senior leaders and what is true behind the scenes.”

Davis is in a unique position to assess the real situation on the ground in Afghanistan. As a staff officer of the “Rapid Equipping Force”, he traveled more than 9,000 miles to every area where U.S. troop presence was significant and had conversations with more than 250 U.S. soldiers, from privates to division commanders.

The report takes aim at the March 2011 Congressional testimony by Gen. David Petraeus, then the top commander in Afghanistan, and the Defence Department’s April 2011 Report to Congress as either “misleading, significantly skewed or completely inaccurate”.

Davis attacks the claim in both the Petraeus testimony and the DOD report that U.S. and NATO forces had “arrested the insurgents’ momentum” and “reversed it in a number of important areas”.

That claim is belied, Davis argues, by the fact that the number of insurgent attacks, the number of IEDs found and detonated and the number of U.S. troops killed and wounded have all continued to mount since 2009, the last year before the addition of 30,000 U.S. troops and 10,000 NATO troops.

Davis notes that Petraeus and other senior officials of the International Security Assistance Force (ISAF), the U.S.-NATO command in Afghanistan, have boasted of having killed and captured thousands of insurgent leaders and rank and file soldiers, cut insurgent supply routes and found large numbers of weapons caches as well as depriving the insurgents of their main bases of operation since spring 2010.

If these claims were accurate measures of success, Davis writes, after the Taliban had been driven out of their strongholds, “there ought to have been a reduction in violence not a continual, unbroken string of increases.”

In fact, Davis writes, Taliban attacks “continued to rise at almost the same rate it had risen since 2005 all the way through the summer of 2011” and remained “well above 2009 levels in the second half of 2011” even though it leveled off or dropped slightly in some places.

The veteran Army officer quotes Congressional testimony by Adm. Mike Mullen Dec. 2, 2009 as citing a lesser increase in Taliban attacks in 2009 of 60 percent over the 2008 level as a rationale for a significant increase in U.S. troop strength in Afghanistan, implying that the war was being lost.

Davis leaves no doubt about his overall assessment that the U.S. war effort has failed. “Even a cursory observation of key classified reports and metrics,” Davis concludes, “leads overwhelmingly to the conclusion that over the past two years, despite the surge of 30,000 American Soldiers, the insurgent force has gained strength….”

Davis is also scathing in his assessment of the Afghan army and police who have been described as constantly improving and on their way to taking responsibility for fighting the insurgents.

“What I saw first-hand, in virtually every circumstance,” writes Davis, “was a barely functioning organization – often cooperating with the insurgent enemy….”

Both in his longer report and in an article for Armed Forces Journal published online Feb. 5, Davis recounts his experience at an Afghan National Police station in Kunar province in January 2011. Arriving two hours after a Taliban attack on the station, Davis asked the police captain whether he had sent out patrols to find the insurgents.

After the question had been conveyed by the interpreter, Davis recalls, “The captain’s head wheeled around, looking first at the interpreter and turning to me with an incredulous expression. Then he laughed.”

“No! We don’t go after them,” he quotes the captain as saying. “That would be dangerous!”

According to Davis, U.S. troops who work with Afghan policemen in that province say they “rarely leave the cover of the checkpoints”, allowing the Taliban to “literally run free”.

Describing the overall situation, Davis writes, “(I)n a number of high profile mission opportunities over the past 11 months the ANA (Afghan National Army) and ANP (Afghan National Police) have numerous times run from the battle, run from rumors, or made secret deals with the Taliban.”

The Army dissenter calls on the House and Senate Armed Services Committees to “conduct a bi-partisan investigation into the various charges of deception or dishonesty in this report….” He urges that such a hearing include testimony not only from senior military officials but from mid- and senior-level intelligence analysts from the Defense Intelligence Agency and other intelligence agencies.

Both Senate and House Armed Services Committees have exhibited little or no interest in probing behind the official claims of success in Afghanistan. That passive role reflects what many political observers, including some members of Congress, see as cozy relationships among most committee members,military leaders, Pentagon officials and major military contractors.

It remains to be seen whether Davis’s success in raising the issue of misleading claims of success in a front-page New York Times story Feb. 6 and in subsequent television appearances will bring pressure on those committees from other members to hold hearings on whether senior military officials are telling the truth about the situation in Afghanistan.

Meanwhile, the U.S. military leadership in Afghanistan is brushing off Davis’s critique as having no importance. During a briefing in which he claimed continued steady progress in Afghanistan, Army Lt. Gen. Curtis Scaparrotti, deputy commander of U.S. Forces-Afghanistan, dismissed the Davis report as “one person’s view of this”.