SANTIAGO, Feb 17 2012 (IPS) - Community radio stations in Chile continue to call for a legal framework that would allow them to operate without restrictions, because although a specific law was passed nearly two years ago, it has not yet entered into effect. 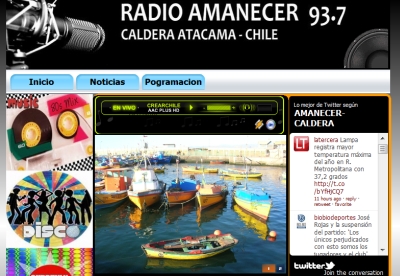 Community radio stations began to mushroom in Chile in 1990, when the 17-year-old dictatorship came to an end, although there were stations operating since the 1970s.

“We started out with the idea of an alternative media approach, outside the official line, talking about the things that were really happening to people in poor areas,” the president of the National Association of Community and Citizen Radio Stations of Chile (ANARCICH), Alberto Cancino, told IPS.

Today 420 community radio stations are operating in this South American country of 17 million people, and 300 of them belong to ANARCICH.

One of the most emblematic stations is Radio Amanecer of Caldera, a port 800 km north of Santiago in the arid region of Atacama. Founded in 1993 by the city’s association of neighbourhood councils, the station covers labour, social, cultural, environmental and religious issues and broadcasts at FM 93.7 and on the internet.

The first major crackdown on community radio stations occurred in mid-1991, driven by the powerful Association of Radio Broadcasters of Chile (ARCHI), which represents the large private stations.

“Their aim was to close us down because we weren’t legal, even though there was no law against us…There was persecution and some stations were shut down. They called us ‘media terrorists’,” Cancino said.

The first regulatory framework, passed in 1994, defined community radio stations as “limited range stations” and penalised stations that broadcast without a permit.

According to the community stations, the 1994 law had flaws and shortcomings involving both financing as well as coverage, because it limited the stations to one watt of broadcasting power.

A new law, on Free to Air Community and Citizen Radio Broadcasting Services, was passed in May 2010. But it has not gone into effect.

The biggest hurdle is that all of the radio stations that have been given a permit must move from the category of “limited range” to community stations, and in order to do so they must show that they belong to a non-profit organisation. Municipal and university stations are thus excluded.

The deadline to complete the process was originally Feb. 14, but ANARCICH secured an extension until November. The Undersecretariat of Telecommunications will then decide which radio stations will be given a permit – a process that could take six to 10 months.

The new law expands the limit on broadcasting power from one to 25 watts, the height of the station’s antennas from six to 10 metres, and the length of the concessions from three to 10 years.

But it assigns only five percent of the available FM broadcast frequencies to community stations – the last portion on the dial, between 105.9 and 107.9. It also keeps in place a ban on advertising that means the stations can only finance themselves by means of ads for businesses located within the station’s range.

While some see the law as a step forward, others say it does not represent a significant improvement.

“Community radio stations are now recognised, but with many restrictions that have to do with the assignment of broadcasting spectrum, the power with which they can operate, and problems of supporting themselves, of financing, and of location on the dial,” Perla Wilson, the vice president of the AMARC Latin America chapter’s Women’s Network, told IPS.

Cancino, on the other hand, says the law is “our great pride today…it may be limited, some people say it is bad, but it is a law that was passed specifically for community radio stations, and that didn’t exist before.”

Wilson said Chile is one of the few Latin American countries with legislation that makes broadcasting without a licence by community radio stations a crime punishable by prison, which is an attack on freedom of expression, according to United Nations and Organisation of American States special rapporteurs.

The origin of the problem, in Wilson’s view, lies in the concept that the broadcasting spectrum, sound waves and frequencies can be privately owned, when they are really “a public asset and should be distributed on the basis of social development criteria.”

Chile should follow in the footsteps of other Latin American countries, like Argentina, which reserves one-third of the broadcasting spectrum for community radio stations, Wilson said.

Laws on community radio stations passed in Uruguay and Colombia, recognition of community stations in the new constitutions of Bolivia and Ecuador, and citizen participation in the drafting of the law in Argentina all serve as examples of how Chile’s legislation could be improved, she added.

Under these laws, the state’s authority is limited to administering the radio spectrum, based on the view that access to radio frequencies should not be subject to major restrictions.

“We are pushing for a broad debate on the production of audiovisual services,” Wilson said. “Chile’s communications laws are piecemeal and fragmented. This law, as it stands, is not applicable.”

But in Cancino’s view, the previous law was “so bad, and at least now there is a new law of a kind that never existed before.”

Both Cancino and Wilson stress the importance of community radio.

In the district of Peñalolén on the east side of Santiago, the Encuentro 107.3 FM radio station is operated by an association of the same name, dedicated to narrowing the digital divide and promoting digital literacy by bringing information technology and telecommunications to different neighbourhoods.

The station, founded in 1998, has links to other non-profit projects, such as a network of community telecentres, computer courses, and primary and secondary school classes for adults.

The community radio movement demonstrated its influence in the 2011 student demonstrations held to demand reforms of the educational system – the largest wave of protests since the return to democracy in 1990.

“In 2011, we had enormous production of independent programming aired in a cooperative manner,” said Wilson.

“We kept open channels, principally in support of the student movement…the community radio stations will always be present to let people know what is happening,” Cancino said.

In November 2011, when the protests had been raging for six months and Congress was just a few hours away from approving the budget for 2012, the students and community and citizen radio stations provided 30 hours of continual programming.

The aim was to support and bring visibility to the social actors committed to the educational reform movement, and at the same time strengthen community radio stations.

In Wilson’s view, “the communication barrier was broken down by the charisma of the student leaders who drew the attention of the large media outlets. But community stations, local stations and social networks also helped break it down.”

“All of that came together in a way of communicating by the social movement that is obviously based on our history (as community stations),” she said.