CHINAGODER, Niger , Feb 21 2012 (IPS) - The little village of Chinagoder, on the Niger-Mali border, has become a refugee camp, flooded with Malian families fleeing fighting between their regular army and Tuareg rebels known as the MNLA – the National Movement for the Liberation of Azawad. 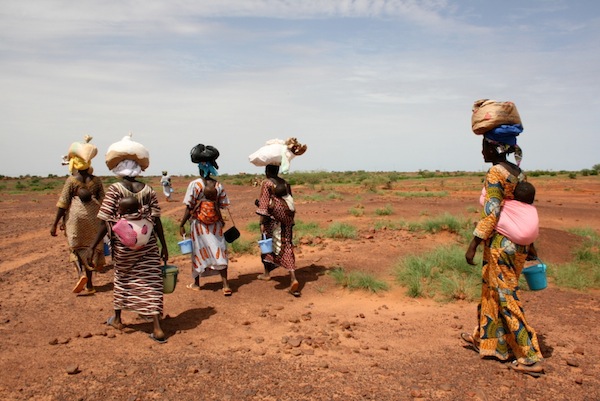 In the past month, more than 15,000 Malians have arrived across the border, entering a region of western Niger that is already stressed by drought and poor harvests. The districts of Ayourou, Koutoubou, Yassan Banibangou, Mangaïzé and Chinagoder – all in the western Tillabéri region of the country – have become the arrival point for refugees.

“Usually home to fewer than 1,700 residents, our village now holds more than 6,500 people, mostly Malian families from Ménaka and Aderaboukane who have arrived with no resources,” Zakari Djibo, younger brother of Chinagoder’s chief, told IPS.

“The influx of refugees began on Jan. 26 and grew, day by day, to the point where it overwhelmed our ability to house and care for them,” Djibo said. “Despite this, we are continuing to welcome these families in distress and give them hospitality.”

All around the village, clusters of shacks have sprung up to provide shelter for the refugees.

“Our situation is gradually improving,” Fatima Alhacen, a 39-year-old mother of six, told IPS. “We now have mats, blankets, cooking utensils and a bit more to eat, thanks to the food aid that the Nigerien government brought for us at the beginning of last week.”

Comforting a tearful 18-month-old baby, Alhacen added,”The first few days, we had to make do with millet bran that we were given by the people here – who are themselves facing problems finding food; but now we have millet flour for porridge, pâte and even rice in our daily menu.”

Clashes between Mali’s army and MNLA rebels have led to the displacement of 44,000 Malians into neighbouring countries, particularly Burkina Faso, Mauritania and Niger – which by itself has recorded the arrival of more than 15,000 refugees, according to the United Nations High Commission for Refugees.

The MNLA is demanding independence for Azawad, a region in the north of Mali – a move which has been rejected by the Malian government. At a Feb. 17 summit of the Economic Community of West African States, regional leaders also condemned the rebellion.

Humanitarian agencies have also noted the presence of a number of Malian soldiers amongst those seeking refuge in Mali. One such is Chief Warrant Officer Yaouchan Maïga, a medical orderly with Mali’s 143rd Nomad Military Company, normally based in the northern Malian town of Aderaboukane.

“We spent 11 days on alert,” Maïga told IPS,” waiting for reinforcements which never came, until our unit was attacked and destroyed.”

Along with 26 other members of his unit, he had crossed the border to Chinagoder. He said a first group of 24 soldiers – some traveling with their families – had already passed through the Nigerien village. Like them, Maïga’s group will be sent to Niamey, the capital of Niger, before returning to Mali.

Northern Mali’s armed conflict is being closely monitored by the Burkinabè authorities, who fear that their territory could become a safe haven for rebels; on its part, the government of Niger fears contagion, having experienced Tuareg rebellions of its own in the 1990s and more recently in 2007.

“Burkina Faso will not serve as a rear base for rebellion,” Djibril Bassolé, the Burkinabè Minister for Foreign Affairs and Regional Cooperation told a French radio station on Feb. 11.

This position was supported by Burkina Faso President Blaise Compaoré, who stressed that what is going on is “first, a problem between Malians”, and called for the initiation of “an inclusive dialogue” to restore peace. Compaoré met with his Malian counterpart, Amadou Toumani Touré, on the sidelines of a regional summit on education in Ouagadougou on Feb. 13.

In Niger, participants in earlier uprisings were warned against any thoughts of returning to arms by Rhissa Ag Boula, a prominent figure in the 1990s rebellion, as well as by Colonel Mahamadou Abou, the head of Niger’s High Authority for the Consolidation of Peace (a government body charged with dialogue, mediation and implementation of several peace accords) on the occasion of a Peace and Development Forum held in Arlit, northern Niger, at the end of January.

“The people will strongly resist any adventurers who might wish to take up arms again,” warned Colonel Abou.

“The recurrence of rebellion holds back development in the north of Mali,” said Bilal Ag Altinine, the representative of the Malian refugees at Chinagoder. “A country is not built by force of arms.”

He called on the Malian authorities to find a definitive solution to the problem.

“We are tired of rebellion,” said Binta Mohamed, a woman from Ménaka, the northern Mali town that the rebels first attacked on Jan. 17. “We want lasting peace so we can better fight against the poverty that surrounds us.”