NEW YORK, May 18 2012 (IPS) - Hundreds of nurses and protestors from other professions gathered on Friday in Chicago to call on world leaders to adopt a Robin Hood Tax on Wall Street transactions as a way to raise hundreds of billions of dollars every year to help heal the U.S. and world economies. 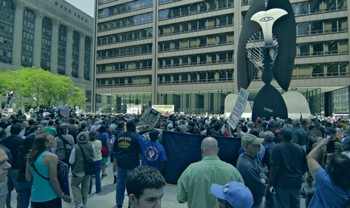 Protestors gather at Daley Plaza in Chicago during the National Nurses Rally on Friday. Credit: Bob Vonderau/CC by 2.0

The march is part of the Robin Hood Tax global week of action taking place from May 18 to May 22 in the wake of the G8 Summit at Camp David, which began this Friday. Activists around the world are lobbying for this global financial transactions tax, supported by a range of United Nations (U.N.) human rights experts, including Olivier De Schutter, the U.N. Special Rapporteur on the right to food, .

In the United States, unions, think tanks and groups that focus on the environment, international health, consumer protection and financial reform lobby for “Wall Street to give back to Main Street”, as a website in support of the Robin Hood Tax says. The idea of a financial transaction tax has existed since the 1930s, when leading economist John Maynard Keynes was a popular driver of the tax.

“After the bank bailout, the government now needs a lot of money to deal with a huge budget deficit and to help meet the USA’s commitments on aid and climate finance,” the website adds.

A financial transactions tax (FTT) would affect the purchase and sale of stocks, bonds, commodities, unit trusts, mutual funds and derivatives such as futures and options. The tax would generate revenues needed to pay for and protect global public goods like education, health and the environment, with a number of variations having been proposed of how high the tax should be.

One of the most prominent ideas is a tax rate of .1 percent on equities and bonds and .01 percent on derivatives.

Estimates suggest that at its lowest rate, the FTT would yield about 48 billion U.S. dollars across the group of countries known as the G20, with higher rates offering up to 250 billion U.S. dollars per year to offset the costs of the enduring economic, financial, fuel, climate and food crises.

Not only NGOs are lobbying for it, but the tax was also discussed by the heads of states at the G20 meeting in Cannes, France, in November 2011, with Germany, France, Spain, Brazil, Argentina, South Africa, Ethiopia and the African Union all pledging their support.

While German chancellor Angela Merkel in January expressed support for the FTT but wanted members of the 27-nation European Union to agree on the measure before its implementation, Sarkozy said that the French government might impose the tax without waiting for its European or G20 partners to come on board.

“If France waits for others to tax finance, then finance will never be taxed,” Sarkozy said in a speech. However, he did not ultimately implement such a tax during his presidential term, which ended this week.

With the G8 meeting held from May 18 to 19, NGOs hope for the representatives of France, Germany, Italy, Japan, the United Kingdom, the United States, Canada and Russia to discuss the issue further.

“At the G20 last November, when Bill Gates threw his weight behind the proposal, many countries announced their support. We want to see this momentum continue,” Simon Chouffot, spokesperson for the Robin Hood Tax Campaign, told IPS.

“We know the FTT is gaining huge momentum in Europe…and that Angela Merkel and Francois Hollande are driving this. Hollande has made the FTT one of his key priorities and we have heard he may raise it with Barack Obama,” Chouffot added. The tax is on the agenda for the EU’s informal summit on growth next week.

U.N. human rights experts also consider a financial transaction tax a pragmatic tool for governments to protect and uphold the human rights of their peoples.

“It is high time that governments re-examine the basic redistributive role of taxation to ensure that wealthier individuals and the financial sector contribute their fair share of the tax burden,” the U.N. Special Rapporteur on extreme poverty and human rights, Magdalena Sepúlveda, said.

“When the financial sector fails to pay its share, the rest of society must pick up the bill,” she said.

“Food prices have twice spiked dangerously over the past five years, and could easily do so again,” warned De Schutter, the U.N. Special Rapporteur on the right to food.

“The FTT will likely reduce hot capital flows that fuel speculation, drive price instability and wreak havoc on the right to food worldwide.”