HAVANA, Jun 27 2012 (IPS) - Cabbage, broccoli, carrots, onions and other resistant vegetables are being grown by researchers in Cuba, who for decades have been working to design plants adapted to the tropical conditions in the Caribbean region. 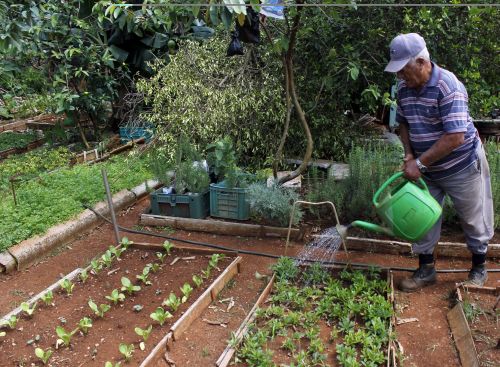 Resistance to drought is one of the main aims of crop improvement researchers in Cuba. Credit: Jorge Luis Baños/IPS

“We are now focused on trying to develop new varieties, with a view to climate change,” Laura Muñoz, the researcher who heads a crop improvement team in the “Alejandro de Humboldt” National Institute for Basic Research in Tropical Agriculture (INIFAT), a government institution, told IPS.

The task involves extreme dedication and long hours of work. Depending on the species, coming up with a resistant variety can take from five to 15 years. The characteristics sought in the new plants are “growth, resistance and vitality,” Muñoz explained.

In the meantime, the climate continues to change. A 2009 report by the Economic Commission for Latin America and the Caribbean (ECLAC) forecasts mild consequences in the region from global warming by 2020, but says they will become especially acute after 2050.

As a result of global warming, extreme events will become more frequent in the near future, such as forest fires, floods, drought, and more intense storms and hurricanes. This makes changes in all spheres of life necessary in developing countries and island nations like Cuba.

The ECLAC report, Climate Change and Development in Latin America and the Caribbean: Overview 2009, says “Adaptation also brings with it some opportunities to pursue more sustainable development, such as better infrastructure, (and) crop variety research and development,” to help sustain food supplies.

Some steps in that direction have already been taken in this Caribbean island nation. Since the early 1960s, Muñoz’s team has identified “five annual planting seasons, with different conditions,” a finding that “did a great deal to improve understanding of the climate problem.”

Today, they are studying more than 30 species of vegetables, to develop resistant varieties. These include tomatoes, peppers, onions, garlic and cucumber, some of the most widely consumed vegetables in Cuba. Others are melons, watermelons, carrots, beans, aubergine and lettuce.

Muñoz said that thanks to the work carried out over the last few decades, Cuba now has varieties that are more resistant to pests and drought, and which can be produced outside of the normal growing seasons. The idea is to develop plants that are adaptable to the climate of the future, when both winter and summer will be warmer.

A good part of the vegetables on Cuban tables are the product of urban and suburban agriculture, grown in backyards and empty lots in and around the cities. This kind of agriculture has grown by leaps and bounds over the last two decades, in response to an effort to promote sustainable, agroecological agriculture and boost food production.

“Between 40 and 45 percent of fresh produce comes from urban and suburban agriculture,” a sector in which 300,000 people work, Nelson Companioni, the national executive secretary of agriculture, told IPS.

INIFAT also coordinates the development of urban farming in the country, he said.

“Those crops that were adapted to periods when it didn’t rain and relative humidity was low are now facing the opposite conditions. So they are attacked by fungal diseases, caused mainly by excess moisture,” said Companioni, who is also the director of urban farming in Cuba.

He said the challenge faced by the programme is to achieve “an adequate web of crop varieties and livestock breeds, and methods adapted to each territory, taking water availability into account.”

The programme’s “organoponic” crops – a term coined for organic production in reduced spaces – have been moved to eastern Cuba, he said, because the sources of water where they were previously located dried up.

The “marien” variety of cabbage is now grown by urban farmers. It took 12 long years of work in genetic improvement to produce this new drought-resistant variety, designed by INIFAT researcher María Benítez. The cabbage is more “compact and more resistant to pests,” she said. It also has a higher yield.

Marien, named after its designer, is also the first species of cabbage that produces seeds in Cuba. Until it was introduced to the market, all cabbage produced in this country was grown from imported seeds.

Every year, Cuba buys five tons of cabbage seed, but in 2011, it produced one ton of marien seed.

Benítez is now working on genetic improvement of arugula, a salad green that is not well-known in Cuba.

And Caribe 71, a variety of onion developed by Muñoz, was included this year in the national plan for replacing imports – one of the priorities of the government of Raúl Castro.

This purple onion can be stored at room temperature for up to eight months, which makes it possible to put it on the market when onions grown with imported seeds run out.

And a variety of broccoli, Tropical F8, adapted by INIFAT to grow in dry tropical conditions, is now produced in some parts of the country.