RIO DE JANEIRO, Jun 19 2012 (IPS) - Announced as an innovative way to encourage the participation of Internet users and the public in general in the debates at Rio+20, the proposal for Sustainable Development Dialogues also raised doubts about the impact its recommendations would have.

“There are always repercussions,” Professor Elimar Pinheiro do Nascimento of the Sustainable Development Centre at the University of Brasilia, who attended the second day of the Dialogues, told TerraViva. 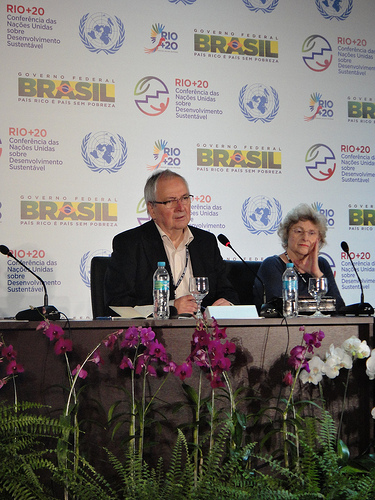 “What can be questioned is the nature of the discussions,” he said, adding that even if all of the measures arising from the Jul. 16-19 Dialogues were implemented, they would still fall far short of what was needed.

Nascimento said there have been improvements since the Earth Summit held 20 years ago in Rio de Janeiro, which is now hosting the U.N. Conference on Sustainable Development or Rio+20, which runs through Friday Jun. 22.

He said, for example, that production requires less energy now. But he added that since much larger quantities are produced, more raw materials are used, which means destruction to the environment is greater.

If things continue to go as they are now, “our lives will tend to grow worse and worse,” he said. “At least a significant part of the population will face more wars, emigration, and food shortages. Much more has to be done in order for people to have a better life.”

Nascimento stressed that it was important for people to find new forms of consumption, and for the rate of obsolescence of products to slow down. Although the worst scenario will be seen in perhaps 50 years, stronger measures and attitudes should be adopted today, rather than mild band-aid measures, he insisted.

Rosa Alegria, coordinator of the Pontifícia Universidade Católica de São Paulo Núcleo de Estudos do Futuro, was even less optimistic about the results of the Dialogues proposed by the Brazilian government as part of the official Rio+20 agenda.

On the summit website, the Dialogues were described as an attempt “to engage in an open and action-oriented debate on key topics related to sustainable development. There will be no participation of Governments or U.N. agencies. Three recommendations emanating from each of the Dialogues will be conveyed directly to the Heads of State and Government present at the Summit.”

Alegria took part in the construction of the Dialogues process since the idea first emerged.

“What I see here is a traditional, conservative format that does not encourage participation but instead intimidates because it is very formal and bureaucratic,” she said.

She recognised, however, that those present at the Dialogues held in Pavilion 5 of the Riocentro – the conference venue – raised questions that have been useful in the debate.

“But reducing the dialogue to 10 questions limits thinking. It hurts the creative process. It wasn’t like a dialogue, it was more like a forum. Besides, integrating society in the process should be more spontaneous, and the People’s Summit should not have been held as a separate event,” Alegria said.

Her doubts are now focused on the final fate of the recommendations to come out of the Dialogues. “If the final document isn’t even ready, how will they get this included?” she wondered.

Alegria suggested that the results of the Dialogues be addressed as a parallel path, in a sort of follow-up or post-treaty process of a new economic model and an opportunity to clarify what the green economy should be.

In her view, society does not yet understand what green economy means, because the concept has never been clearly and objectively discussed and defined.

Rio+20 “could be the opportunity to define this concept,” she said. In a collective interview on Sunday Jun. 17, Luiz Alberto Figueiredo, under secretary at Brazil’s Foreign Ministry, announced that a group would meet to try to define the green economy.

From the point of view of the panellists invited to the Dialogues, the process was a success.

The Dialogues are a reflection of what is morally and scientifically necessary, said Manish Bapna, acting president of the World Resources Institute, who took part in the Dialogues’ debate on sustainable development to fight poverty. He added that the documents show what the world believes it is necessary to do.

His panel reached agreement with regard to the urgent need to foster education and raise awareness on a shared sense of responsibility for sustainable consumption and production.

The plenary session of the Dialogues suggested educating the public to promote sustainability, with the state guaranteeing basic services. And the panellists agreed on the need to emphasise empowerment of local communities, promoting participation and access to information.

Maria Cecilia Wey de Brito, secretary general of WWF-Brazil, also voiced criticism. But she said that, independently of the process, it was important to be present at the Dialogue on Forests to suggest the inclusion of the “zero net deforestation by 2020” goal on the list of priorities.

The recommendation was immediately included, along with the emphasis on recovery and reforestation of 150 million hectares – which earned the most votes from web surfers – and the recognition of the importance of science, technology and traditional knowledge for sustainable development.

Professor Bertha Becker of the Federal University of Rio de Janeiro stressed the need to generate sources of income for the local population in the rainforest.

“The western Amazon is becoming a frontier for immigration of poverty,” because the land reform process has given rise to settlements in that part of the country, “and Haitians, Africans and Indians are heading there,” she said.

That raises the need to create new forms of sustainable production and equip cities for offering basic services to the local population, Becker said.

Klaus Töpfer, founder and executive director of the Institute for Advanced. Sustainability Studies (IASS), said the conclusions of the Dialogues panels were important not only for Brazil, but for the whole world, because of the debates they generated.

He said that although there was no guarantee that they would be incorporated in the main Rio+20 outcome, they would at least be put down on paper.