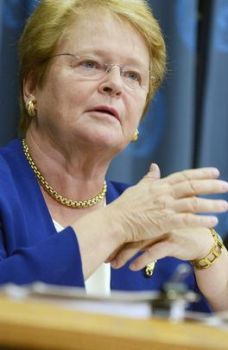 The United Nations and the host country Brazil – along with big business – put a positive spin on the outcome of the conference, a follow-up to the 1992 Earth Summit.

It was another historic document that will change the world, they claimed.

But most non-governmental organisations (NGOs), civil society representatives and women activists expressed disappointment and outrage over the final blueprint, titled “The Future We Want”, which was approved by world leaders Friday.

The comparison with the 1992 Agenda 21 was inevitable.

Anita Nayar of the Manila-based Development Alternatives with Women for a New Era (DAWN) told IPS that in the historic agreement adopted in 1992, there were around 170 references to gender and an entire chapter on women.

In the latest version of “The Future We Want”, there are only around 50, and these have been watered down and were used as negotiating chips by states, she said.

“It is not a simple matter of gender mentions either, but rather there is clearly an unwillingness by some states to agree on concrete actions and an overall weakening of internationally agreed commitments on gender equality and women’s empowerment,” Nayar added.

Equally critical was Gro Harlem Brundtland, a former prime minister of Norway and chair of the Brundtland Commission (named after her) which brought the concept of sustainable development to global attention 25 years ago.

“The Rio+20 declaration does not do enough to set humanity on a sustainable path, decades after it was agreed that this is essential for both people and the planet. I understand the frustration in Rio today,” she said in a statement released Thursday.

Brundtland, who is a member of a group called The Elders, said, “We can no longer assume that our collective actions will not trigger tipping points, as environmental thresholds are breached, risking irreversible damage to both ecosystems and human communities. These are the facts – but they have been lost in the final document.

“Also regrettable is the omission of reproductive rights – which is a step backwards from previous agreements. However – with this imperfect text, we have to move forward. There is no alternative,” she said.

“The most important message as we leave Rio is that the collective task of making the three pillars of sustainable development a reality must continue – and we don’t have any time to lose.”

The reactions from groups at the grassroots level were mostly negative.

“I haven’t seen this much fake green covering since last St Patrick’s day. The document does not come close to the future we really want and that’s because it was written with the interests of the few rather than the many in mind,” said Nathan Thanki of Earth, one of the protesting youth leaders who occupied the plenary entrance at the Rio+20 site on Thursday.

Noelene Nabulivou, Women’s Action for Change, Fiji, told IPS, “As an activist from Pacific I see clearly the catastrophic impacts of climate change, biodiversity loss and sea level rise. Rio+20 does not do justice to the immediacy and severity of this global problem.”

Nicole Bidegain of GEO-ICAE, Uruguay said, “The green economy simply reinforces the current model of development, based on overconsumption and production. The same financial mechanisms that caused multiple crises since 2008 are being promoted, but this time to commodify nature. There is enough evidence on the negative impacts of the financialisation of nature on women’s rights and livelihoods. ”

She said the private sector as a source of finance is prioritised over public financing. “This is ironic as the private sector is concerned with maximising profit in the short term, not with long-term investments needed to transition to genuine people-centred sustainable development.”

Monica Novillo, Coordinadora de la Mujer, Bolivia, said, “I came to Rio+20 with high expectations that governments would build on the landmark resolution on sexual and reproductive health and rights for youth and adolescents adopted at the 45th Commission on Population Development.”

She said Brazil played a key role in creating this outcome, “so I expected that they would strongly defend these fundamental rights at Rio+20 against a minority of conservative governments.”

While the Cairo and Beijing agendas (on population and women) were reaffirmed at Rio+20, it is high time that these agreements are fully implemented, she added.

She told IPS, “Reproductive rights has been traded away. It is very clear in this outcome document that there is a continuing war on women’s human rights launched by the Holy See (Vatican) along with some very conservative governments.”

How is it possible, she asked, that states can speak of CBDR (common but differentiated responsibilities) and equity while ignoring gender equity and gender justice? “We are deeply disappointed that our friends remained silent,” she said.

“The attack that has been launched by the Holy See, along with its friends and some very conservative governments, continues and it is very clear that they intend to keep this war going.”