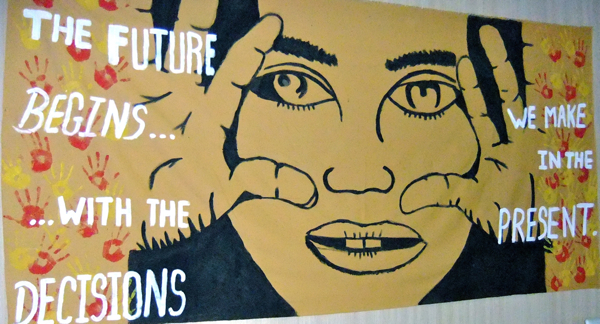 A poster on a wall at Rio Centro. Civil society groups say they are "very disappointed" with formal negotiations at the Rio+20 Earth Summit. Credit: Stephen Leahy/IPS

RIO DE JANEIRO, Jun 19 2012 (IPS) - “Very disappointing.” That was the term business and non-governmental organisations used to describe the formal intergovernmental negotiations at the Rio+20 Earth Summit as of Tuesday.

With overwhelming scientific evidence showing that the Earth’s ability to support human life is at serious risk, the Rio+20 summit is being held to help chart a safe course that will steer away from disaster and bring a better future people around the globe.

After two years, negotiators from more than 190 nations agreed Tuesday to a 49-page draft of the document “The Future We Want”, intended to be the roadmap for this transformation. This document will be presented to heads of states in Rio de Janeiro to revise and finalise by the summit’s conclusion on Friday.

Yet the draft document leaves out a 30-billion-dollar fund proposed by a group of developing countries known as the G77 to finance the transition to a green economy. Nor does it define tangible Sustainable Development Goals (SDGs), which will be substituted for the Millennium Development Goals, which expire in 2015.

“This (the revised text) is extremely disappointing….There is no vision, no money and really no commitments here,” said Lasse Gustavsson, head of the Rio+20 delegation from WWF International, which works to stop environmental degradation worldwide.

Instead, two years of work have resulted in merely a long document that commits to virtually nothing but more meetings, he said.

“This document is a great disappointment. There’s no ambition and little reference to the planetary boundaries we face,” said Kiara Worth, representing the U.N.’s Major Group on Children and Youth at Rio+20.

“The voices of civil society and future generations is going unheard. We ought to call this Rio minus 20 because we are going backwards,” Worth told TerraViva.

“I don’t understand why there is no section in the document on science – this sends a very unfortunate message.”

“We have a fundamentally flawed economic system, and we in civil society had hoped governments of the world would recognise this reality, but they haven’t,” said Jeffery Huffines of Civicus, World Alliance for Citizen Participation, based in Johannesburg, South Africa.

Civil society is looking for a balanced economy that respects planetary boundaries and seeks to expand the welfare of all people within a safe operating space for the planet, Huffines told TerraViva.

Instead, there are 49 pages of concepts without any commitments or means of going forward with these concepts. The role of civil society participation has been limited. “We need more democratic decision-making, not less,” he added.

“Speaking personally, as an American citizen, it is quite clear our electoral system has been bought by the corporate sector, by Wall Street. And that’s why our elected politicians are not going to challenge the current economic system. It’s up to civil society to challenge this,” said Huffines.

Others were more cautious in their criticism, such as Meena Raman, a negotiation expert with Third World Network, an international network of organisations and individuals involved environment and development issues.

“The outcome document does not have the ambition needed to save the planet or the poor, but it has not taken us backwards, particularly given our initial fears that Rio+20 might be Rio-40,” Raman said.