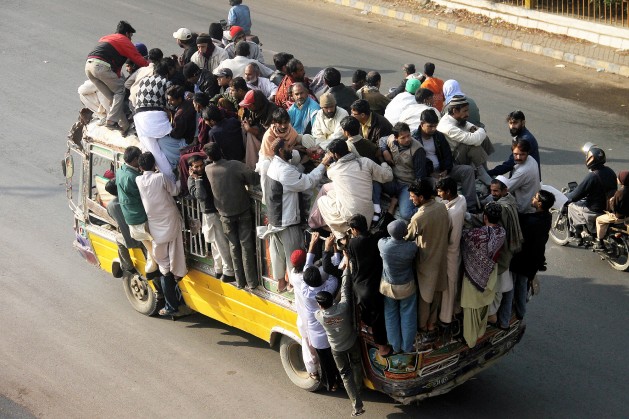 KARACHI, Pakistan, Jul 11 2012 (IPS) - “No scalpel, no stitch and no rest needed,” guarantees Dr. Ghulam Shabbir Sudhayao, referring to the surgical procedure called vasectomy – the least popular method of birth control around the world, including Pakistan.

“People confuse vasectomy with castration (surgical removal of the testicles) and that scares them away,” Sudhayao, who works for the government’s population welfare department, tells IPS.

Vasectomy involves a minor procedure to snip the sperm ducts.  Sudhayao himself resorted to the method when he decided that his family was complete. “We had two daughters and wished for a son, and the third  time, my wife delivered twin boys.”

“Compared to vasectomy, tubaligation (tying a woman’s fallopian tubes) is a complex surgical operation and is done under general anaesthesia,” says Sudhayo, explaining why he did not ask his wife to get herself sterilised.

Sudhayao says he has carried out over 6,000 of these minimally invasive, “ten minute” surgeries performed under local anaesthesia in the last 20 years.

But, Sudhayao is frustrated that the 2,000 social mobilisers working for the department are unable to meet their quotas. “We get no more that 80 to 90 clients in a month though the operation is  free and the patient gets Pakistani rupees 500 (five dollars) for nutrition, and the introducer can collect 1.59 dollars as incentive money.”

Over the last two decades, Sudhayao has trained 18 other doctors to perform this simple operation, but few of them are interested in promoting it.

“Despite being trained to spread the message, they say they are scared of being ridiculed in the community. To popularise this method, we need to use the electronic media, the quickest way to get the message across,” says Sudhayao.

Interestingly, men from the low economic strata appear to be quicker to realise the benefits of this procedure.

Syed Jeal Shah, 42, a biology teacher in a government school in Khairpur, underwent vasectomy after he had 10 children. “Things were getting out of hand. We could not afford to feed so many mouths on my meagre salary.”

While his operation was carried out eight years ago, he is still the butt of friends’ jokes that centre around impotency. “My colleagues say family planning (FP) is a woman’s problem,” says Shah.

“Men don’t think FP is their problem,” says Sherhshah Syed, former president of the Society of Obstetricians & Gynaecologists of Pakistan and currently president of the Pakistan National Forum on Women’s Health.

Syed says vasectomy is associated with impotency. Men find the subject embarrassing and often seek advice from clerics, most of whom are opposed to birth control.

But with Pakistan’s population expanding rapidly and family planning  methods focused on women alone failing, population experts are taking a second look at vasectomy as a means of birth control.

Pakistan’s population stands at 180 million, and with each woman bearing four children on average the projections are that the population could cross  450 million by 2050.

Dr. Ayesha Khan who heads RADS tells IPS that “some 53 percent of these couples buy FP services, while 15 percent access them through non-governmental organisations.”

According to the Population Reference Bureau (PRB), a Washington D.C.-  based research organisation that monitors population trends around the world, Pakistani women ususally think about FP only after they have had five or more children.

“In many countries girls marry at a very young age, become pregnant too early and out of necessity  drop education to take care of their young family,” Melesse said in an interview with IPS.  In Pakistan, he added, only 22 percent of married women of reproductive age use a modern contraceptive method.

Farid Midhet, a demographer and founder of the Safe Motherhood Alliance cites “illiteracy, in particular female illiteracy”, and bad governance as the two main reasons why family planning programmes have never worked in Pakistan.

“Contraceptive use works as part of an enlightened and educated culture where women have some autonomy,” he told IPS.

Over the years the emphasis and pressure to bring down the number of babies has fallen on women, a majority of whom are illiterate and not empowered to take decisions concerning family size.

“The numbers for both male sterilisation (0.33 percent of all contraception) and condom use reflect the gender power imbalance – women bear a disproportionate burden when it comes to pregnancy prevention,” says Melesse.

“We need to proactively engage men as clients, as partners and as change agents in the sexual and reproductive health programme in Pakistan,” emphasizes Melesse.

“Religious prohibition and husband opposition are the main reasons identified for non-use of contraception in Pakistan so we need to engage with religious leaders to increase access to sexual and reproductive health services among most conservative communities in Pakistan,” Melisse said.

The case of Abdul Ghaffar Khosa, 55, who teaches in a madrassah (religious seminary) in Nawabshah, Sindh province, typifies the difficulties as well as the potential of roping in the clerics.

Khosa says there are different schools of thought in Islam regarding family planning and that while it remains a controversial issue he has set an example by undergoing the procedure himself about eight years ago.

But Khosa accepted vasectomy only after begetting 22 children from two wives. “In between pregnancies, my wives were miscarrying and they were getting weaker – I was scared of losing them.”

Khosa waited three years, to make sure that the procedure had not impaired his sexual functioning, before recommending it to friends and relatives. He has even referred several of his fellow clerics to Sudhayao.