WASHINGTON, Jul 3 2012 (IPS) - Incoming World Bank President Jim Yong Kim reported to work on Monday for the first time, telling those gathered at the bank’s headquarters here in Washington that he was “humbled and inspired to take over today as president”. 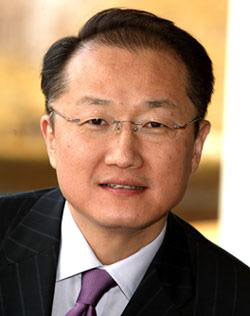 Kim also made it clear that he recognised that he was assuming the office at a critical time for both the world economy and the bank itself. In a separate statement released Monday, he noted that he was taking over “at a moment that is pivotal for the global economy, and defining for the World Bank as an institution”.

He continued: “The global economy remains highly vulnerable … My immediate priority will be to intensify the World Bank’s efforts to help developing countries maintain progress against poverty in these volatile times.”

Such a focus is directly in line with what many observers have been calling for in recent weeks. Kim, a Korean-American doctor who is widely admired for his work in international public health, takes over the presidency amidst new signs that the fragile global economic recovery might be faltering.

“You have the International Monetary Fund bailing out Europe, but we know that the crisis is already impacting the developing world, with very serious knock-on effects,” Elizabeth Stuart, with Oxfam International’s Washington office, told IPS.

“The World Bank has a very important role to play in shoring up countries that are still suffering from the impacts of the initial financial crisis.”

Oxfam is calling on Kim to take immediate action to protect developing countries from the faltering economies of the eurozone.

In mid-April, many development organisations decried the process by which Kim was selected for the presidency, which extended an unbroken tradition in which the United States’ preferred candidate is installed to head the bank.

Nonetheless, even at that time it was clear that a shake-up was in the works. In the run-up to Kim’s election, two other strong candidates, both from developing countries, were also in the running.

Unlike previous World Bank presidents, however, Kim is not an economist, diplomat or politician. This unorthodox background, coupled with his widely admired development experience, has led many to openly speculate about the possibility of a transformational tenure for his five-year term.

Stuart says it is already heartening to see that Kim’s introductory statement focused on the two key issues of growth and equity, without overlooking the changes that are surrounding the institution.

“He’s right that there’s an urgency both in the wider world and in the bank itself,” she says. “The bank has reached something of a crisis. Countries are cutting their aid budgets, and the bank will have to ask for new replenishment of funds for developing countries. For that, the bank will need to show that it’s getting value for money.”

Stuart cites three areas in which she hopes that a Kim presidency will show results. Within his first term, he could ensure that 15 million more children in sub-Saharan Africa will go to school, that an additional 200 million more people around the world are given access to free healthcare, and that no World Bank agriculture investments result in poor people being pushed off their lands.

A commitment towards these three issues, she suggests, could offer benchmarks for observers to gauge just how transformational Kim’s presidency could be.

For his part, Kim didn’t offer much detail in his public statements Monday.

He emphasised that he would be continuing certain current policies, such as a priority on economic and social safety nets, as started by recently departed president Robert Zoellick, as well as basic income-protection programmes.

In addition, however, Kim’s statement includes a clear tone suggesting an open-mindedness to continued change. In the past the institution he now helms has been criticised for having grown too large and inefficient, and at times continuing to focus on outmoded approaches to poverty alleviation.

Yet Kim clearly recognises that the bank is in the midst of an evolution. He states that the institution “has embarked on an innovative modernization agenda” and notes the importance of “continuing to adapt to a world that is changing profoundly”.

“I believe the World Bank’s best days are still ahead,” Kim says. “The economic success of emerging market economies, the rise of citizen power led by young people and the unprecedented penetration of new technologies are challenging old development paradigms.”

He continues: “A central part of my responsibility in the next five years will be to ensure that the Bank’s distinctive strengths are aligned with the needs of a world in transformation and transition.”

Still, one issue that Kim has yet to officially address is the World Bank’s role and responsibility regarding human rights, a long-time concern for some critics.

In a Washington Post article published on Friday, law professor Galit A. Sarfaty wrote: “Human rights are inextricably linked to the Bank’s mission and critical for the agency’s legitimacy, and yet internal obstacle after internal obstacle has marginalized the issue. In order for the Bank to effectively respond to pressing development challenges abroad, Kim must first show leadership on this challenge at home.

“If Kim gets it right, the collision between new Bank leader and old Bank culture won’t be pretty – but it will set in motion the only organizational shift that could make the World Bank successful at reducing poverty worldwide.”