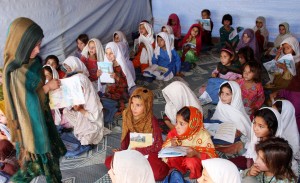 “Our kitchen is run on this oil,” explains Sheema. The shiny cans are distributed in her school under World Food Programme (WFP)’s ‘Back to school, stay in school’ project launched as people began streaming back to the Bajaur after the Pakistan army completed flushing out Taliban militants from the agency in April 2011.

“Last year, as people displaced by the fighting began returning, we entered into an agreement with the WFP to launch the project,” Akramullah Shah, an official of Bajaur Agency’s education department, tells IPS.

From 2007 to 2009, when the Taliban held sway over Bajaur Agency, about 100,000 people fled for safety to makeshift camps. “During that period Taliban militants destroyed 107 schools and disrupted education services, affecting about 80,000 students,” Shah said.

With much of Bajaur’s infrastructure reduced to rubble and the mainstay of agriculture ruined, the returning residents had little to look forward to and were reluctant to take on the added burden of sending their children to school.

Ghufran Gul, father of Mushtari and Sheema, said he would not have been able to send his daughters to school but for the WFP programme of distributing edible oil and fortified biscuits. “The oil is tasty and people like to use it for making rotis (unleavened bread),” he said.

“We are happy. We sisters get the biscuits while the oil is used by the entire family,” said the Gul twins who study in grade three of the government girls’ high school in Bajaur.

Each student is given a 75 gm packet of high-energy biscuits on entering the school gates, and also gets to carry home a 4.5 litre can of oil every two months.

“Students must attend 22 days of school each month in order to claim the incentives,” says Bakht Baidar, a teacher in the Charmang area of the Bajaur Agency.

To ensure the success of the programme cans of oil are also given free to the teachers. However, education officer Muhammad Rahman said the incentive for teachers was limited to schools where at least 50 children were enrolled and attending regularly.

“Under the agreement with the WFP, the government must also provide safe drinking water, bathrooms and boundary walls in each school covered by the programme,” Rahman tells IPS.

The programme has strengthened education in the Bajaur, one of the seven agencies of the Federally Administered Tribal Areas (FATA) that has become embroiled in the fighting across the border in Afghanistan between the United States-led alliance and the Taliban.

After their ouster from power in 2001, the Taliban began pouring over the border from Afghanistan and imposing their will on Pakistan’s tribal areas. In the FATA, they systematically destroyed 585 schools, charging that the curricula went against Islam.

Taliban activity in the Bajaur resulted in the agency becoming a target of U.S. army drone attacks. A drone attack, executed in January 2006, left 18 people dead, sparking national outrage and compelling the Pakistan army to launch its own operations in the area.

“As soon as the Pakistan army had defeated the militants, we started reconstruction of damaged schools and launched programmes to encourage the students to return, ” Bajaur Agency lawmaker Akhunzada Muhammad Chittan told IPS.

According to Chittan, enrolment at the government-run primary schools had increased from 102,922 in 2010 to 1,320,876 by the end of June this year and was to improve further.

“Apart from providing free books and food items, relief organisations other than the WFP have been pitching in with purchased uniforms, shoes and teaching kits that are powerful incentives for parents to send their children to schools,” he said.

According to the 2008 census the literacy rate among the FATA’s 3.2 million population is just 22 percent, well below the national average of 56 percent.

A brief setback to the food distribution programme occurred in December 2010 when a female suicide bomber blew herself up at a WFP centre in the Bajaur, killing 45 people and injuring 80 others.

WFP spokesperson Amjad Jamal said the food assistance programme was due to run until the end of this year, but the U.N. agency has proposed that it should be allowed to continue until 2015.

“The main objectives of the programme are to protect children from hunger and motivate the parents to send their children back to schools to resume their education,” he said.

Except for the North Waziristan Agency, the WFP programme now covers the whole of the FATA and parts of Balochistan and Khyber Pakhthunkwa provinces.