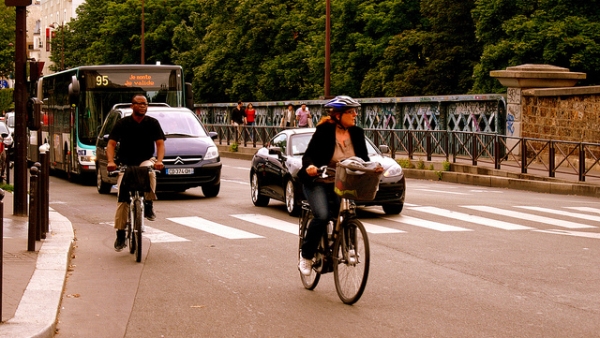 PARIS, Jul 18 2012 (IPS) - In July 2007, many Parisians laughed at their mayor, Bertrand Delanoë, when he announced the creation of a public bicycle sharing system aimed at reducing traffic in the French capital.

The system was called Vélib’, a combination of “vélo”, which means bicycle in colloquial French, and “liberté”, or freedom. During its first few months of operation, the skeptics appeared to be right.

While most Parisians snubbed the heavy public bicycles (weighing 23 kg), others destroyed or stole them. During the first year, 8,000 Vélib’ bicycles disappeared and another 16,000 were vandalized, according to official figures.

A number of other factors worked against the urban cycling initiative: the subscription requirement, the high cost of the service, the physical exertion required, which in the summer leads to certain side effects undesirable to a population famous for its polished personal appearance, and the chaotic Paris traffic, feared for its high risks.

But despite it all, when Vélib’ marked its fifth anniversary on Jul. 14, it was also able to celebrate its undeniable success: in five years, 138 million people have used the 23,000 rental bicycles, and the system currently has 225,000 subscribers out of a total urban population of 2.3 million.

In addition, during this time, only six people have died in traffic accidents involving rental bicycles.

The system has also gained followers: 31 communities on the outskirts of Paris have joined Vélib’, which serves as a model for another 34 French cities.

The Parisian authorities stress that Vélib’ has also served as an example for the development of similar initiatives in numerous cities around the world, from Melbourne, Australia to the U.S. city of San Francisco.

In 2011, Velib’ achieved profitability and is fully expected to yield profits again in 2012.

For Delanoë – a sober and extremely reserved politician who publicly declared his homosexuality in 1998 – the triumph of Vélib’ is also confirmation that his transportation policy, initially controversial, is the right one: a quiet revolution for a city besieged by traffic jams and air pollution.

“Five years ago, I could not have imagined that Vélib’ would have such good results,” Delanoë told Tierramérica *. “My goal was to try out a different policy, to help Parisians recover their independence and freedom in transportation, and at the same time, to reduce air pollution.”

This policy is summed up by the slogan “Paris respire” (literally, “Paris breathes”), omnipresent in signs used to promote bicycle use in the city.

Vélib’ “has disproved many urban transport taboos,” urban planning expert Isabelle Lesens told Tierramérica. “Bicycles reduce parking problems, and in a relatively small city like Paris, providing the weather is good, they are an efficient means of transportation.”

But despite its success, the innovative bike-sharing system still has certain drawbacks.

“The costs of Vélib’ are very high. The administration and maintenance of each bicycle costs 3,000 euro a year. There certainly could have been a way to achieve the same results for less money,” commented Lesens.

JCDecaux, the company that manages Vélib’ in cooperation with the city government, acknowledges these problems. “The system is very costly in terms of implementation,” Charles Decaux, chairman of the company’s board of directors, told Tierramérica. “But since 2011 it has achieved budgetary balance, after losing money during the first three years.”

In any event, the success of Vélib’ has inspired Parisians to rediscover their passion for cycling, reflected in the world’s foremost cycling race, the Tour de France.

Moreover, according to official figures, Parisians make roughly 200,000 trips a day on privately owned bicycles. In total, the number of bicycles in Paris has increased 41 percent since 2007. During the same period, motor vehicle traffic has decreased by 25 percent.

Bicycles are one component of the urban transportation policy that Delanoë put into practice when he was first elected mayor in March 2001. One of his first measures was the creation of traffic lanes for exclusive use by buses in almost the entire city, in order to speed up their circulation and reduce the space available for use by private automobiles.

The municipal government is also participating, in cooperation with communities on the city’s outskirts, in the construction of a non-polluting tram line that will form a connecting ring around Paris by 2020. In addition, some 370 km of bike lanes have been created in the city.

On the weekends, motor vehicle traffic is prohibited on the most emblematic streets of Paris.

On Dec. 5, the municipal government introduced an electric car sharing system based on the Vélib’ model. Christened, naturally, Autolib’, the initiative has not yet achieved the same degree of popularity as the bike-sharing scheme. But Delanoë is confident that it will have a positive impact on transportation in the city.

“When Autolib’ becomes part of the daily way of life of Parisians, like Vélib’ already is, the urban transportation policy will change definitively,” said the mayor, who was reelected in 2008, with 57.7 percent of the votes, to govern the French capital until 2014.

“All of these measures – Vélib’, Autolib’, the bus lanes, the tramway – are aimed at revolutionizing urban transportation and reducing private motor vehicle traffic, to curb carbon dioxide emissions and purify the air,” he added. “The fact is that automobiles no longer have a place in the big cities of our times.”