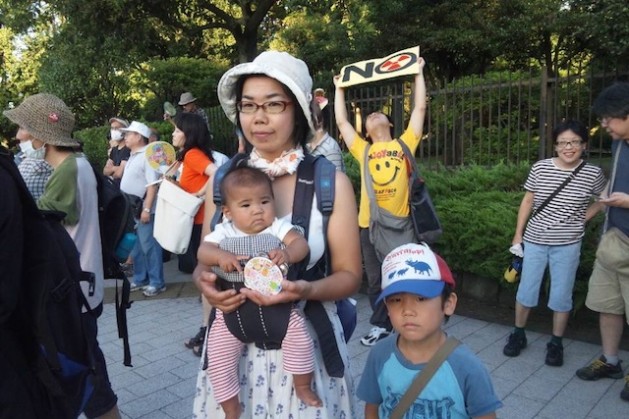 TOKYO, Aug 9 2012 (IPS) - A new wave of anti-nuclear protests in Japan this summer, sparked by the disastrous meltdown at a power plant last year, suggests that civil society is no longer willing to allow the government to take the lead in deciding the nation’s energy policy.

A clear example of the impact of grassroots activism was the decision on Aug. 3 by leading prosecutors, after months of deliberation, to accept criminal complaints against Tokyo Electric Power Company (TEPCO), Japan’s largest utility corporation that operated the now-crippled Fukushima Daiichi nuclear reactor.

“The new move by prosecutors is a cornerstone in our long and hard fight to force TEPCO to face its criminal responsibility. It is an unprecedented achievement for civil organisations in Japan,” Hiromi Ebisuwa, a veteran activist in Fukushima who is leading the criminal complaint, told IPS.

The lives of tens of thousands of residents, including young children and infants, were drastically affected when they were forced to flee dangerous radiation exposure after the nuclear accident at Fukushima, which followed a massive earthquake and tsunami on Mar. 11 last year.

Since Jun 1,300 residents in Fukushima prefecture have filed complaints with the Fukushima District Public Prosecutor’s Officer. They have identified 33 people, including former executives at TEPCO and the Nuclear and Industrial Safety Agency, as culprits in the crisis, for failing to install anti-tsunami protections in the nuclear reactor.

The criminal complaints centre on negligence resulting in death or injury and the violation of the environmental pollution offense law.

Yet another example of the spreading anti-nuclear mood in Japan is a complaint filed against former senior Tokyo Electric Company (TEC) officials by a citizen’s group at the Kanazawa District Public Prosecutor’s office in Ishikawa prefecture.

TEC is debating re-opening its Shiga nuclear power plant in Ishikawa, located on the northwestern coast.

“The results of strenuous grassroots efforts after Fukushima, unprecedented in recent decades, are now (visible) in the Japanese political and social spheres,” she told IPS.

She, like other experts, believe the horror of the Fukushima accident, coupled with public outrage about the tragedy, contributed significantly to the temporary halt of operations in all of Japan’s 50 commercial reactors.

Today, despite the summer heat, Japan is operating on less than three percent of its nuclear power, another major development for a country that has long touted nuclear energy as the lynchpin of its national economy.

Still, the coast is not clear for protestors. In July, despite continuous public opposition and demonstrations, the government, pointing to the need for secure energy supplies and with the consent of the cash-strapped local Oi government in western Japan, restarted two of the region’s four reactors.

Indeed, the debate on prioritising between phasing out nuclear energy versus boosting economic growth is now a critical public issue—a July survey by the Japan Sustainable Institute showed that over 80 percent of those polled were against nuclear power.

However, more than 50 percent support a 2050 deadline for closing down all reactors, which illustrates the fact that concern over national energy supplies dilutes the urgency for immediate action and alternatives.

Still, breakthroughs by activists have been monumental.

The final decision came only after the government pledged to promote higher safety levels under an independent nuclear regulatory authority that is now investigating the threat from a fault line found underneath the Oi reactors.

As the movement gains steam, Prime Minister Yoshihiko Noda was forced last week to issue a statement that he will meet the organisers of the weekly protests, a drastic change from his stance hithero, which, for many activists, was characterised by his comment, quoted in various local weeklies, that the demonstrations were simply “nosiy”.

For the past two months Misae Red Wolf has been a key organiser of the weekly anti-nuclear demonstrations that snake past government offices in Tokyo, sometimes drawing more than 100,000 people demanding the abolition of nuclear power.

Addressing a crowd in the searing summer heat, Misae demanded the immediate halt of operations in the two newly re-activated nuclear plants and the overall abolition of nuclear energy in Japan.

“Grassroots activism is the way forward. We have been waiting too long for a reliable answer from the government, which continues to ignore the voices of the people who have suffered too heavily from the nuclear accident,” she said.

Eiji Oguma, a prominent Japanese sociologist and professor at Keio University, describes the popular demonstrations as a sign of growing distrust of the country’s political and bureaucratic leadership following the Fukushima accident, and frustration at policies that do not reflect the will of the people.

“Dissatisfaction with politicians has accumulated over 20 years of economic stagnation. The Fukushima disaster and the decision to restart Oi has brought it to a critical point,” a July article in the prominent Asia Pacific Journal quoted him as saying.

The growing rift between politicians and their electorates led to the launch this July of the Green Party, which stands on an anti-nuclear platform and promotes welfare stability for the elderly.

Akira Miyabe, spokesperson for the Green Party, which will debut when it presents its candidates for next year’s Upper House elections on the proportional representation platform, explained to IPS, “The new political party represents a fresh start in Japan.”

“Green Party involvement in gathering criminal complaints against TEPCO for the Fukushima accident is aimed at changing the cozy ties between government and business that has been the (driving force) behind nuclear power in Japan,” he said.