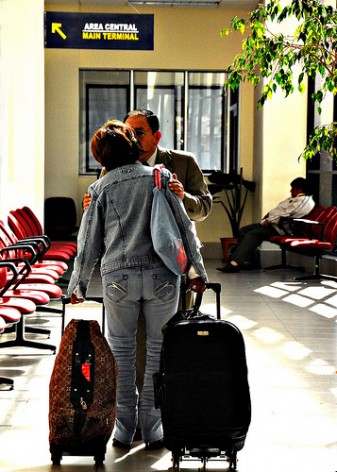 BUENOS AIRES, Aug 28 2012 (IPS) - “The new buildings in the Argentine capital were built by Paraguayans,” Isidro Méndez says with some pride. The 60-year-old immigrant, who runs a construction company, is one of the hundreds of thousands of foreigners who came to this country with hopes for a better future.

The steady recovery of the economy and the subsequent rise in employment since the mid-1990s stemmed the departure of Argentines and drew immigrants from other countries in the region, especially Paraguay and Bolivia, the two poorest nations in South America.

Although it is not a new phenomenon, there has been a significant spike in immigration since that period.

A key aspect was legislation passed by the government of centre-left president Néstor Kirchner (2003-2007), who was succeeded by his wife Cristina Fernández, facilitating the legalisation of undocumented immigrants.

“We know how to suffer,” Méndez, who was only 17 when he came to this country, told IPS. He found a job as a construction worker and now he employs dozens of his fellow Paraguayans, building houses and apartment buildings.

“El Impacto de las Migraciones en Argentina” (The Impact of Migration in Argentina), a study presented this month by the International Organisation for Migration (IOM), reports that 77 percent of the foreigners living in Argentina are from other South American countries.

They are mainly from the border countries of Bolivia, Brazil, Chile, Paraguay and
Uruguay, as well as from Peru. Between 2001 and 2010 – census years – the number of South Americans rose from one million to 1.4 million, and they have been “almost fully absorbed by the local market,” the IOM says.

The study reports that 39 percent of the South American immigrants in the country are Paraguayans, whose number rose from 325,000 in the 2001 census to more than 550,000 in 2010. A majority of the Paraguayan men work in the construction industry, while the women are largely employed as domestics.

“Everyone who comes from Paraguay today is working,” Méndez said. “The Argentines are disgusted by dirt and shovels. And if it rains and a truck full of bags of cement needs to be emptied, like what happened to me today, they would go on strike for sure,” he adds ironically.

The IOM study reports that between 2003 and 2010, productivity in the construction industry in Argentina grew 14 percent a year.

The second-largest community of South American immigrants is from Bolivia, representing 25 percent of the total in 2010.

The number of Bolivians rose from 231,000 in 2001 to over 345,000 in 2010. Most Bolivians work as agricultural labourers, on olive farms and in vineyards, for example, or as small traders and street vendors. Others work in the textile and footwear industries.

Many Bolivian families lease land on the outskirts of cities to grow fruit and vegetables, which they sell at market, the IOM reports.

Fifty-five percent of the Paraguayans and Bolivians work in the informal sector, without being enrolled in the social security system. However, they have access to public health and education, and to the government’s cash transfer programmes.

In addition, 14 percent of the 1.4 million South American immigrants in Argentina are from Chile, 11 percent from Peru, eight percent from Uruguay and three percent from Brazil.

In a conversation with IPS, Juan Artola, IOM regional representative for the Southern Cone region, said immigrants come to Argentina “because there is work, and legislation that makes it possible for them to gain residency status relatively easily.”

Immigration from border countries was fuelled in the 1990s by the currency board system that pegged the peso to the dollar for over a decade, put in place by the government of Carlos Menem (1989-1999), which made it easier to save up money in hard currency.

But the currency board system collapsed in late 2001, and the value of the peso plunged, while the economy went under along with the government of Fernando de la Rúa (1999-2001).

The downward spiral of employment and subsequent rise in poverty, which soared to over 50 percent of the population, pushed tens of thousands of people to move abroad, and prompted thousands of immigrants to return to their countries of origin.

But the majority of the immigrants stayed in Argentina.

Susana, who preferred not to give her last name, told IPS that she came from Peru to Argentina without papers “in the Menem era.” She said she worked for several years as a domestic worker, in the informal sector.

The economic crisis and devaluation of 2002 made it difficult for her to continue sending dollars back to Peru to support her daughter. But she stayed, and her employers began to pay into the social security system for her. In 2008, she brought her daughter over, to study at the public University of Buenos Aires.

Legal residency, which she earned after the new law was passed, gave her job stability and made it possible for her to be reunited with her daughter.

In 2003, Argentina repealed an immigration law put in place by the 1976-1983 dictatorship, and passed a new law that recognises immigration as a human right.

The law simplified the legalisation process and streamlined the paperwork, recognised immigrants’ right to healthcare and education, made it illegal to deny healthcare and other services to undocumented immigrants, and eliminated the requirement that public employees must report illegal immigrants.

In 2006, the Patria Grande (Great Fatherland) campaign was launched to further ease access to temporary residency by undocumented immigrants, even if they do not have a work contract. All they need is a national identity document and a certificate of good conduct from their own country, showing that they have no criminal record.

“Clearly, many find better work possibilities here,” Artola said. “Even when they start out in the informal sector, they can get a formal sector job once they have their residency papers.”

The IOM official stressed that “no other country in South America takes in such a large proportion of immigrants as Argentina.

“Furthermore, this country has never deported immigrants, it has always kept its doors open, and the labour market has grown a great deal since 2003.”