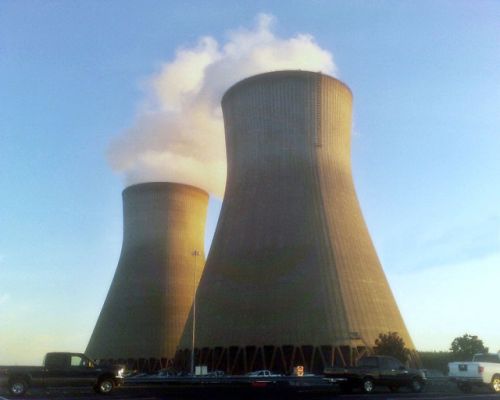 ATLANTA, Georgia, Aug 9 2012 (IPS) - The U.S. Nuclear Regulatory Commission, which oversees commercial nuclear power enterprises, has halted the issuance of all new nuclear reactor licensing decisions after a court ruling citing the failure of industry and government to identify an acceptable solution for the long-term storage of nuclear waste.

The NRC issued the order on Tuesday in response to a petition filed by numerous environmental groups, as well as individual petitioners.

The petition followed a ruling by the U.S. Circuit Court of Appeals for the DC Circuit dated Jun. 8, which stated that the way that the NRC deals with nuclear waste issues in its review process for new or existing nuclear power plants is unacceptable.

At issue is something called the Waste Confidence Ruling of the NRC.

“What we call Waste Confidence was an environmental finding by the commission, what we call a generic finding, meaning it applies universally (to all permit applications), that the spent waste, high level fuel can be stored for several decades beyond the life for the reactor,” Dave McIntyre, an NRC spokesman, explained to IPS.

“The US Circuit Court of Appeals… agreed with the challengers and remanded that waste confidence rule to us, and said basically, the main thing is the NRC should have looked at the possibility, what if there is no repository (for the nuclear waste)?” McIntyre said.

“Yucca Mountain (a proposed waste storage site in Nevada) has been cancelled, and there are no plans as of now. What if Congress continues to be divided and the nation doesn’t choose a direction to go and find a different site?” he said.

The NRC rule at issue assumes “(a) the NRC will find a way to dispose of spent reactor fuel to be generated by reactors at some time in the future when it becomes ‘necessary’ and (b) in the meantime, spent fuel can be stored safely at reactor sites,” according to a joint press release from the environmental groups.

“I think this is very significant,” Louis Zeller, executive director of the Blue Ridge Environmental Defense League, told IPS.”It upsets the NRC Commission and the nuclear industry’s apple cart because it’s something they did not expect.

“They expected us to challenge new reactors in Georgia, Alabama, South Carolina, and Virginia, in many of the places we have, but I don’t think they expected one of the foundational tenets of their nuclear paradigm to be upended like this. I think this struck them by surprise.

“I try to be optimistic about these things. I do think it is important enough and at this point the judges of the DC circuit court of appeals have basically agreed – the NRC was whistling past a graveyard on nuclear waste issues,” Zeller said.

He noted that nuclear waste is highly radioactive, poisonous, and deadly.

Each storage site has different amounts and compositions of radioactive waste depending on how long each site’s operator decides to burn the fuel.

“It’s called burn-up, how long do you leave the uranium fuel in, which creates a different range of radionuclides, radioactive poisons,” such as iodine and strontium, Zeller said.

McIntyre said he does not yet know whether the NRC will appeal the recent court ruling, but that this is not stopping the agency from addressing some of the concerns raised in that ruling.

“Because of the recent court ruling striking down our current waste confidence provisions, we are now considering all available options for resolving the waste confidence issue, which could include generic or site-specific NRC actions, or some combination of both,” said the NRC Order, dated Aug. 7.

McIntyre said the agency staff is currently busy preparing a list of recommendations to present to the five NRC commissioners within a few weeks.

“We have not yet determined a course of action. But, in recognition of our duties under the law, we will not issue licenses dependent upon the Waste Confidence Decision or the Temporary Storage Rule until the court’s remand is appropriately addressed,” the NRC stated.

McIntyre noted that neither the NRC decision nor the court ruling impacts any final licensing decisions that have already been granted, for example, Plant Vogtle in Georgia. However, the Vogtle permit is already facing legal challenges related to post-Fukushima nuclear safety issues, as previously reported by IPS.

U.S. Rep. Dennis Kucinich, a Democrat from Ohio, sent out an email to constituents Wednesday asking, “Are we witnessing the end of nuclear power?”

“We have had half a century to find a good solution to the problem of nuclear waste, and we are no closer now than we were in the 1960s. That is because there is no ‘good solution.’ We will never be able to find a risk-free method of storing nuclear waste,” Kucinich wrote.

Zeller said that it may possibly be the least unsafe option to leave the nuclear waste where it is, because the risks involved in transporting the waste, even if a new site could be found, would be too high.

He also noted that there is an underlying problem with trying to find a storage site for the nation’s nuclear waste when the U.S. is still producing more and more waste every day. Thus, it is not clear how much waste ultimately needs to be stored and it is not a finite amount.