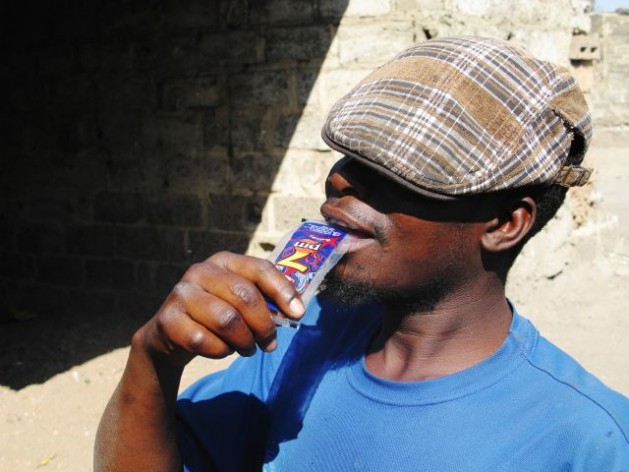 A young man sipping a sachet of tujilijili in Chaisa compound, Lusaka, Zambia. Officially he risks a two-year prison sentence by doing this, as these sachets containing hard liquor have now been banned. Credit: Jorrit Meulenbeek

LUSAKA, Sep 12 2012 - About a dozen men aimlessly wander around what seems like a prison courtyard. Most of them appear completely disoriented, a confused gaze in their eyes.

A shivering old man staggers around the area in circles with a friendly but absent-minded smile on his face, continually picking imaginary insects from his body. “Doyo,” (insect) he mumbles, as he helpfully points out a birthmark in the neck of one of the nurses.

A young man sits on the concrete floor in another corner, his body shaking so heavily that he fails to bring the spoon filled with porridge to his mouth. He has to be fed like a baby. “This one is still in the withdrawal phase,” head-nurse Alice Phiri remarks dryly. For her, this is business as usual.

“Many of them come with wounds like these,” she points out the circular scars around the young man’s arms and ankles. “When the family doesn’t know what to do with them anymore, they tie them up using electricity wire to restrain them.”

This is not a prison. It is the mental ward of Chainama Hills hospital just outside Lusaka, the capital of Zambia. About three quarters of the men admitted here are only temporarily ‘mad’, as a result of serious alcohol abuse and withdrawal symptoms.

Hearing the stories of those who have already returned to their senses – after 72 hours of detox – most mention one word when asked what they used to drink to end up here: tujilijili.

These plastic 60 ml sachets, sporting brand names as ‘Zed’, ‘Officer’, ‘Joy’ and ‘Double punch’, appear innocent with their bright and fruity colours, but contain over 40 percent alcohol. Locally produced by various companies they became a trend over the past five years. Apart from in bars and licensed outlets, they were soon sold by the many informal street traders, going for around 1000 Kwacha (20 U.S. cents) or less.

This made them available to the poor, who often use alcohol as an escape from the harsh realities of everyday life. Reports of school children drinking the sachets in class, security guards sipping them on duty, and several deaths attributed to tujilijili made headlines, earning them the nickname ‘killer sachets’. Earlier attempts to ban the product failed, as the producers were operating within the law and the content of the drink itself complied with all existing regulations.

This is why it came as a surprise to both critics and supporters in April when Professor Nkandu Luo, minister under the newly elected Patriotic Front government, made the bold move to outlaw the production, sale and consumption of alcohol in sachets. She did not ban the drink, but the packaging.

For concerned parents like Peter Mbewe from Lusaka’s Chaisa compound, this decision was long overdue. “You have seen how youths are dying at a tender age because of these things,” he says. “The minister was right to ban the substance. It was destroying our children.”

Business out of booze

In the dusty gravel roads of Chaisa, a poor township with high numbers of youth unemployment, a layer of trampled tujilijili sachets has become part of the ground cover. Now the remaining ‘jilis’ are sold under the counter at double the price. It has become risky business since the council police started patrolling undercover. Anyone found with the sachets risks a two-year prison sentence.

Dibblo Mwanza, who used to sell the sachets from his makeshift shop, was also arrested trying to finish his stock, but got away with a fine.

“The PF government is not fair,” he says. It was mainly unemployed urban youths like him who voted the opposition party into power in September last year: “They promised us more money in our pockets, yet there are no jobs, and the only way to sustain ourselves, keep our family and pay rent was through this lucrative business.”

According to the official statistics, Zambia does not rank as highly as other alcohol-loving countries. Compared to Eastern European countries, Zambians seem quite modest, consuming only 3.9 litres of pure alcohol per year compared to 15.7 litres in Russia. But these numbers do not give the full picture as they are mainly based on registered alcohol sales and fail to take into account the homebrews that many poor Zambians drink instead.

Before tujilijili came onto the scene in recent years, hard liquor came in the form of kachasu, a traditional distilled spirit that people brew and sell from home. Kachasu houses are especially common in rural areas and the compounds of Lusaka, where poverty is rife but while Kachasu is also officially illegal, police are less concerned by its use.

Brewer Harry Kalad, who manages to support his wife and kids, his old mother and two orphan children from this business, admits he prays that the police continue their hunt for tujilijili, as his own kachasu business is now doing better than ever. “All my old customers have come back, my profits have been increasing.”

While those who really want to drink still have other options now tujilijili is gone, the ban does seem to have had an effect, as the number of people admitted to Chainama Hills hospital with alcohol intoxication seems to have dropped already.

“In the first days after it was banned we saw more people suffering from withdrawal symptoms because they could no longer get the sachets,” says Nurse Alice Phiri. But now she sees the number has dropped.

“Of course Kachasu is still there, but that is sold in bigger, more expensive bottles and is not so easy to carry,” she explains. “I have worked here for more than 20 years. Before tujilijili, when we only had kachasu, such patients were rare.”

“My own son, who also used to work here, was fired because of abusing alcohol. I salute the government for banning these things,” she adds.

But the manufacturers and traders of the sachets have not given up and are still fighting the decision to ban tujilijili in court.