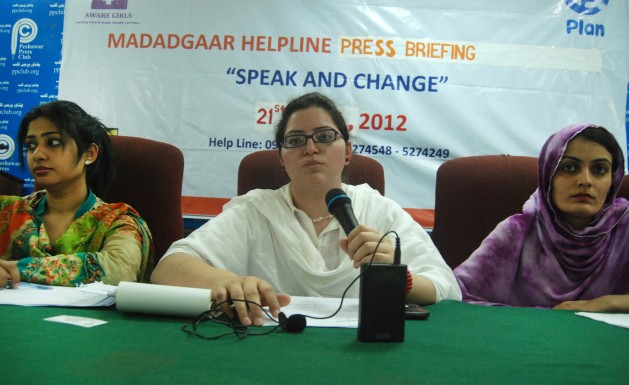 At the launch of a helpline for women in Peshawar. Credit: Ashfaq Yusufzai/IPS

PESHAWAR, Pakistan , Sep 7 2012 (IPS) - Samina Afridi, a lecturer at the University of Peshawar, regrets that down history the leaders of the Pashtun (also Pakhtun) tribes have conspired to keep them away from education and literacy. The Taliban are only the latest example.

“Education was a soft target through 19th and 20th centuries. The only thing that has changed in more recent times is the modus operandi used to scare people away from schools,” Afridi, a gender specialist, tells IPS.

Pashtun tribes straddle the Afghanistan-Pakistan border and number about 40 million. Their traditional homelands extend from Oxus river in Afghanistan to the Indus river to include Pakistan’s Khyber Pakhtunkhwa (KP) province and the Federally Administered Tribal Areas (FATA).

Afridi says Pashtun tribesmen have been made to believe that sending children to schools is a sure way to invite the wrath of Allah. “Systematic campaigns against education have deeply impressed the gullible tribal population,” she said.

Pashtun leaders often get clerics to urge their congregations to stay clear of modern education as proof being true Muslims.

A proverb in the Pashto language, designed to create revulsion for literacy, goes thus:  Sabaq Da Madrase waye, Dapara Da Paise Waye Jannat Ke Be Zai Na We, Dozah Ke Ba Ghoopoay Wye  (Those who study in schools are for money. They will not find a place in paradise, but will sink in hell).

Former KP lawmaker Nasreen Khattak says that even in times of peace – rare in the Pashtun homeland – no serious effort has ever been made to promote education. The people of the FATA were neglected even during the relatively benign British rule over the territory.

“The Taliban militants have the worst record as enemies of education because their systematic efforts to dismantle education by blowing up schools with explosives have proved a real setback to education,” said Khattak.

In a campaign against education that began in 2005, Taliban militants have destroyed about 700 schools in KP and the FATA. The Tehreek Taliban Pakistan and other jihadist groups operating in the tribal areas proudly claim responsibility for destroying schools and disrupting education.

“The anti-literacy campaign launched by Taliban militants has deprived more than 20,000 students of a chance get educated and kept the literacy rate in these territories at about 22 percent against the national literacy rate of 54 percent,” Khattak said.

Girls have been the worst victims and in areas under Taliban influence there is no concept of female education, Khattak said. “Taliban militants, according to their own interpretation of Islam, regard educating women as un-Islamic.”

The provincial governments of KP and the FATA have been doing a fire-fighting job by setting up tents as makeshift classrooms.

“We feel let down at the government’s apathy towards the declining educational infrastructure, but realise its helplessness,” says Shahabuddin Khan, a businessman from the Safi area of the FATA’s Mohmand Agency where not a single school building has been left standing.

Now living in Peshawar, capital of KP province, Khan says he and his family members, including three daughters and two sons, feel homesick but cannot go back for fear of having to deprive their children of formal education.

But, very few FATA families can afford to move to Peshawar just to educate their kids. Unsettled conditions spilling over the border with Afghanistan, over the last 25 years, have all but destroyed the economic base of the Pashtuns – agriculture, forests and livestock.

“The Pashtuns have sunk into poverty and many cannot afford to educate their children even if they wanted to,” Sitara Ayaz, KP women development minister, told IPS.

One answer to the problem would be to mainstream women into national politics, she says. “If we invest in educating women in the FATA we can reap dividends.”

But, that is easier said than done. “There is not a single woman leader or politician in the whole of the FATA, while half of the territory’s 10 million people are women,” Ayaz argues.

The federal government is aware of the problems in FATA but lacks resources to find solution. “We have been urging the international community to help rebuild Taliban-damaged girls schools in FATA,” Ayaz said.

Shagufta Malik, another female lawmaker from the KP, says that women in FATA were, in living memory, modern and liberal. “Things changed dramatically when the Taliban appeared on the scene.”

“We remember that the women of the FATA would shake hands with their male guests and cover their heads only with a simple chadar (shawl),” Malik said. “Now they cannot be seen in public unless they are in burqa (completely enveloping outer garment).”

Afridi at Peshawar University says that except in FATA, women in four provincial assemblies, one Lower (National Assembly) and Upper House of Parliament (Senate), have 33 percent representation. “There is not a single woman among the 16 parliamentarians from the FATA.”

Even in KP province, the literacy rate for women is only 30 percent, Afridi says. Over the years, discrimination against women has increased and they lag far behind men in education and have little chance of finding decent employment.

Akhunzada Muhammad Chittan, a lawmaker from FATA, says the government has launched several programmes aimed at encouraging women to take vocational training as a route to economic empowerment.

Chittan says the government is aware of the problems faced by women in the FATA and firmly believes that the empowerment of women through basic education and literacy is the best route to a permanent, gender-friendly solution in the troubled territory.