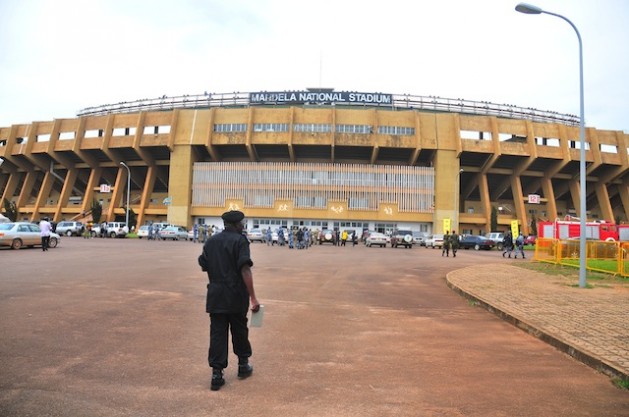 Uganda’s Mandela National Stadium, commonly referred to as Namboole, and located 10 kilometres from the country’s capital, Kampala, was built by the Chinese. Credit: Ronald Kabuubi/IPS

KAMPALA, Sep 21 2012 (IPS) - Almost a decade since Uganda initiated negotiations with China for the favourable export of coffee beans to the Asian giant, it is struggling to create even trade relations with the world’s second-biggest economy. But economic experts predict that the East African nation could close the gap through the promotion of agriculture and the eventual export of oil.

“Although there is an imbalance currently, the gap will narrow as there are efforts to diversify Uganda’s export base,” Stephen Kaboyo, the managing director of Alpha Partners, a financial research company in the capital, Kampala, said in an interview with IPS.

“China is a high consumption nation with a mass market, and agricultural commodities and oil will have potentially large markets there. Already China’s demand for oil is so huge that its demand controls the pricing of this commodity,” he added.

In 2004, Uganda negotiated a preferential treatment agreement for its coffee exports to China, leading into the formation of Uganda Crane Coffee, a joint venture between the Uganda Coffee Development Authority and the Beijing North Star Industrial Group, for the promotion of the East African nation’s beans in the world’s most populous nation.

Concerted promotion of Uganda’s other exports to China, including the diversification of products like cocoa, cotton, wood, copper concentrates, and hides and skins, saw the value of shipments soar from 15,000 dollars in 2003 to 26.71 million dollars in 2011, according to figures from the state-run Uganda Bureau of Statistics.

This pales in comparison, however, to China’s exports, which have grown in the last decade. The Asian country was Uganda’s third-biggest source of imports last year, with goods valued at 522.5 million dollars, compared to 70.2 million dollars worth of imports nine years ago.

China remains a preferred source of imports for Uganda because of “competitive prices and very adaptive products,” Moses Kalule, the chief executive of Kampala City Traders Association, told IPS in a phone interview.

Footwear, textiles, motorcycles and parts, bicycles, rubber items, pharmaceuticals, and telecommunication, electronic, and medical equipment, are some of the major imports from the Asian nation, according to China’s Ministry of Commerce.

The entry of the Chinese into petty trade in this country favoured them since they could cheaply procure goods from their homeland to the disadvantage of Ugandans importing the same range of products from China, Kalule said.

But the control of Chinese engaging in petty trade has erased unfair competition that locals faced against them, he said. He would not elaborate on the controls.

Issa Sekitto, the spokesperson of the Kampala City Traders Association, said that the body had been collaborating with immigration authorities to monitor Chinese engaging in petty trade. Currently, the investor threshold in Uganda is 100,000 dollars, but he said that a number of Chinese had forgone investing and instead merely engaged in petty trade. In July, local traders protested against the situation, claiming that the Chinese had kicked them out of business.

But Uganda is keen to grow its exports to China at an average annual rate of 25 percent, Kaboyo said.

Uganda can boost its exports to China if it enhances agricultural productivity, especially for commodities that are in demand in China, Paul Mugerwa, an economics lecturer at Uganda’s Bugema University, told IPS.

“The government should come up with a strategy to promote agriculture for the Chinese market as we have productive capacity in this area,” he said.

China is not only a source of imports for this East African nation but a source of foreign direct investment as well. The Asian nation was the leading source of licensed planned investments here from 2009 to 2010, according to the Uganda Investment Authority.

China accounted for 31 planned projects worth 246 million dollars in leather tanning, food processing, information and communication technology and real estate, according to the Uganda Investment Authority.

Successful Chinese investment from 1993 to 2011 amounted to 596 million dollars, with 265 companies from the Asian giant operating in Uganda and providing at least 280,000 jobs, the state-run New Vision, Uganda’s leading daily, quoted Yali as saying on Feb. 24.

Yanli Ren, the second secretary at the Chinese embassy in Uganda, agreed: “Chinese companies are involved in construction and manufacturing in Uganda because policies favour their investments. These factories will help Uganda reduce its imports.”

The 2006 discovery of crude oil and a host of other minerals in Uganda are expected to enhance Chinese investment in the country and narrow the trade imbalance between the two nations.

“The discovery of oil and abundant mineral resources will definitely see a lot more players (in the Ugandan economy), including Chinese companies,” Arthur Nsiko, a researcher with the investment bank African Alliance Uganda Ltd., told IPS.

“Oil will reduce the country’s overall trade deficit since it accounts for about eight percent of the country’s imports,” he said.

The China National Offshore Oil Corporation or CNOOC is already involved in the development of Uganda’s oilfields after it acquired a third of interests in two oil blocks from the London-based Tullow Oil Plc in February. CNOOC and France’s Total SA paid a combined 2.9 billion dollars in shares in the two oil blocks.

Uganda may start oil production in 2014 with an initial 10,000 barrels per day for power generation, according to the government. Partial completion of a refinery will be achieved in 2015 with its capacity expected to reach 60,000 barrels a day, the government says.