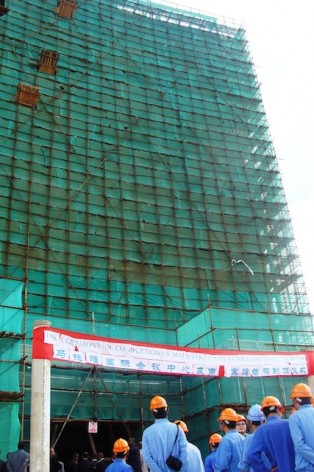 BISHOFTU, Ethiopia, Oct 13 2012 (IPS) - China could soon expand its involvement in peace and security issues in Africa, according to government officials, researchers and academics from both the Asian giant and resource-rich continent who met at the second China-Africa Think Tanks Forum in Ethiopia from Oct. 12 to 13.

Mulugeta Gebrehiwot, the director of the Institute of Peace and Security Studies in Ethiopia that organised the forum, told IPS that it should not come as a surprise that China is interested in peace and security on the African continent.

“There is nothing that is not touched by peace and security. Whether you’re (looking) for investment collaboration, economic operation or anything else. Peace and security has to be in place. Because that’s the central instrument that keeps the environment for any other interaction and collaboration together,” Gebrehiwot said.

Chinese officials pointed out that the Asian giant’s non-interference policy should not be interpreted as indifference to the continent’s peace and security.

“Our non-interference policy in Africa does not mean we have an indifferent attitude towards African issues. We oppose some countries that in the excuse of care for another, interfere with African internal affairs,” Director-General Lu Shaye from the Department of African Affairs at the Chinese Foreign Ministry told IPS.

He said that China would not intervene readily in the affairs of another country and their involvement would be to merely support regional organisations and institutions on the continent.

Until now, China’s role in Africa has mostly focused on economic development. Last year, China-Africa trade amounted to 166 billion dollars, according to statistics from the Chinese Ministry of Commerce.

China’s approach of non-interference has provided Africa with much needed funding without the strings that some western powers attach to loans for Africa, and has resulted in the fast construction of large infrastructure projects, according to experts.

A research article in Standard Bank’s Guide to Transactional Banking in Africa 2012 by Bridgette Liu and Richard Stocken titled “The role of China’s construction industry in Africa’s infrastructure development”, stated that Chinese companies now dominate the African construction sector, with a market share larger than those of France, Italy and the United States combined.

Much has been written about the World Bank and IMF loans to Africa. A 2006 briefing paper by Oxfam International titled “Kicking the Habit” stated that because the two organisations use their aid to push economic policy reforms such as privatisation and liberalisation on poor countries, in Mali, “where far from leading to economic growth and poverty reduction, conditions have hiked electricity prices and are likely to hurt cotton farmers as well as delaying aid flows and undermining country ownership of policies.”

China’s President Hu Jintao announced two months ago that his country would invest 20 billion dollars more in Africa. But he also stated that China would take new measures to support the cause for peace and development in Africa. Policies are already being drafted to indicate how China will improve is participation.

While China is Africa’s biggest trade partner, it already is the largest contributor of peacekeepers to Africa among permanent members of the United Nations Security Council.

But the role of China in Africa is often seen as a controversial one. China’s funding of the new AU building headquarters in Addis Ababa has sparked debate among non-African critics about whether the new economic world power was buying its way into the continent.

Western countries have warned on frequent occasions that China’s participation in Africa has colonial tendencies. Or that the Asian country supports oppressive regimes and is trying to take advantage of Africa’s natural recourses.

United States Secretary of State Hilary Clinton said during her latest Africa trip in August, that the U.S. stands up for human rights and democracy “even when it might be easier or more profitable to look the other way, to keep the resources flowing.”

However, Dr. Mehari Taddele Maru, an independent peace and security expert in his conference paper titled “China-Africa Relations: Areas of Reform for a Sustainable Partnership”, disagreed and stated that China’s reputation in Africa is positive as African countries feel that their Asian partners respect other people, cultures and states.

While China’s improved role in peace and security in Africa could be beneficial for the continent, it could also be rewarding for China.

“China’s cooperation with Africa will become a problem in the future if civil wars continue to exist,” Professor Liu Hongwu, the director of the Institute of African Studies at Zhejiang Normal University, told IPS.

Experts at the forum pointed out that peace and security was broader than security focused around violent clashes. It also focuses on food security and fighting the epidemic HIV/AIDS and other diseases.

Hongwu added that the Chinese are not only focused on maintaining peace by training soldiers: “We can also improve the ability to keep security by training countries in sectors such as finance, education and technology.”