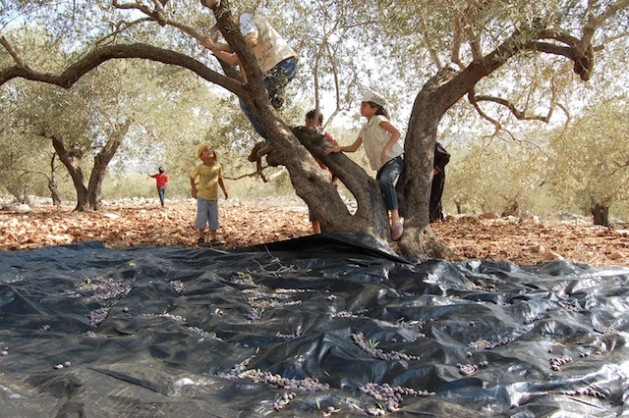 Palestinian children join in to make use of limited time given by the Israelis for gathering olives in Deir Istiya village in the occupied West Bank. Credit: Jillian Kestler-D’Amours/IPS.

“The road is closed by this gate and it’s (always) closed except for two times in the year,” says Adley Shteyeh, a member of the Salem local committee.

Salem residents own approximately 10,000 dunams of land on the eastern side of their village. The area can only be accessed with a permit issued by the Israeli military authorities and after crossing the gate and an Israeli settlement bypass road.

“Usually we need ten days or more to do our work on the other side (of the bypass road),” Shteyeh said. Over his shoulder, a handful of villagers could be seen cutting branches off their trees, to make sure they get all the olives before their permits run out.

Last week, two Palestinian farmers from Salem attempted to cross the bypass road in a tractor to access the olive trees. Before they could manage to do so, an Israeli military jeep blocked their passage. Moments later, IPS witnessed two more army jeeps arrive on the scene.

Then, about a dozen Israeli soldiers held a group of Palestinian and international supporters, who were on a tour of the village, and local Palestinian residents, on the suspicion that Palestinian youth from the village threw stones at nearby Israeli settlers.

After over half an hour, the group was finally let go, and the farmers were given access to their olive groves.

“If someone tries to cross this road without coordination, he is either beaten or harassed by settlers or the Israeli army,” Shteyeh says. “Settlers have come in and vandalised land, and beat up people inside the village also.”

According to the United Nations Office for the Coordination of Humanitarian Affairs in the occupied Palestinian territories (UN-OCHA), there are 73 barrier gates in the West Bank. Closed year round, the Israeli authorities only open them for limited amounts of time during the olive harvest.

Since the start of October this year, UN-OCHA estimates that Israeli settlers have vandalised or destroyed approximately 1,000 olive trees belonging to Palestinians in the West Bank.

This destruction has negatively impacted the economic viability of the olive oil industry in the occupied Palestinian territories, which accounts for 14 percent of the agricultural income in the area, and supports approximately 80,000 Palestinian families.

“Any losses relating to settler violence, or the ongoing restrictions on access for farmers to their olive groves throughout the year, has an impact on the local economy,” Ramesh Rajasingham, head of UN-OCHA, tells IPS via e-mail.

“The sad thing here is that, in many of these cases, a family that could previously support itself has had its livelihood pulled from under them and therefore suddenly find themselves reliant on support from humanitarian organisations and donors; this reliance on aid, in turn, further contributes to the crisis of dignity. This situation is entirely avoidable.”

But harvesting olives is more than just a means of sustenance for many Palestinians.

“Our lives are bound to the olive trees,” farmer Jamal Abu Hijji tells IPS. A 48-year-old father of four, Abu Hijji spent a sunny October afternoon last week with his two brothers, their wives, and their children in his olive tree grove in the Nablus-area village of Deir Istiya.

Together, using ladders and small plastic rakes, they combed through each branch and knocked olives onto plastic tarps set up below the trees.

Abu Hijji explains that during the olive harvest season, he works from 6 am to 4 pm each day for about one month, to cultivate almost 300 trees. But, in addition to harvesting, he must work at a local olive press to meet his family’s needs.

“The outcome is modest to make a living, but it is important for us as we have lived here and inherited the lands and the trees from our fathers and grandfathers,” he said. “Its significance is not for a great materialistic value; it is more because of the moral value, the traditions and the land. I am Palestinian and I want to protect my land.” (END)