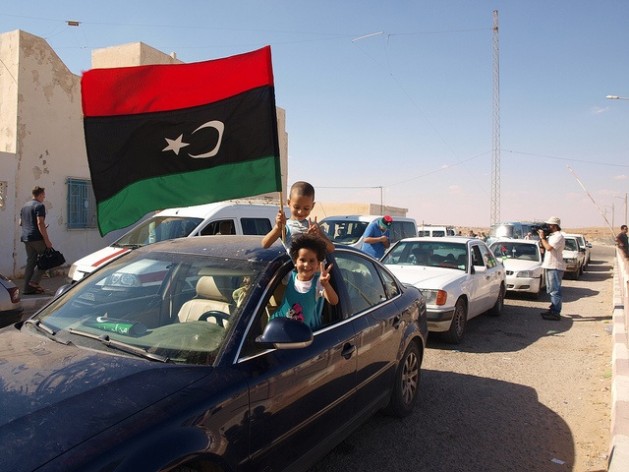 The hard-won freedoms of the Arab Spring need support from the international community to survive. Credit: Karlos Zurutuza/IPS

BRUSSELS, Oct 4 2012 (IPS) - The Arab Spring is far from over. The protracted conflict in Syria continues to swallow lives while the international community, hamstrung by geopolitics, looks on; riots across the Muslim world following the release of a low-budget American movie that is disrespctful of the Prophet Muhammad resulted in the death of U.S. Ambassador Chris Stevens in Libya; Tunisia and Egypt continue to struggle with post-revolutionary economies; and a string of democratically elected Islamist governments has taken root in newly-liberated countries throughout the region.

Activists and analysts are on the edge, fearing that the freedoms fought for and won during the Arab Spring are now diminishing again. The only hope, they say, is the continued support of the international community for the long road ahead.

“Even though we are experiencing setbacks, we do need your continuous support for this momentum,” Tunisian activist Nabila Hamza, president of the international non-profit, Foundation for the Future (FFF), said at the European Union headquarters last Thursday, in a plea to European governments for long-term engagement in the Arab transition to democracy.

According to a recent report by the U.S.-based Freedom House, only Tunisia has shown an improvement in its overall governance score. Bahrain slipped backward while Egypt only showed a minor improvement. The score was based on five criteria: accountability and public voice, civil liberties, rule of law, anti-corruption and transparency.

Last Thursday, during a panel discussion entitled ‘Arab Spring, revolutions and the domino effect’, organised at the Brussels office of the representation of the German state of North Rhine-Westphalia to the European Union, several experts shed light on the most recent developments in the region and debated the EU’s specific role in democracy promotion in the Arab region.

Professor Todd Landman, director of the Institute for Democracy and Conflict Resolution at the University of Essex, pleaded for continuous foreign support for democracy, even if the donors themselves are not satisfied with the results of the elections.

Hamza echoed these sentiments, adding, “The EU expects us to hire experts to decipher official aid documents while we’re fighting a revolution.”

Hamza, who, through the FFF, oversees the disbursement of more than 10 million dollars of support to over 166 civil society-led projects spread across 15 countries in the Arab region, is optimistic about the changes sweeping the Arab world.

“The Arab Spring has created space for civil society to grow at an enormous pace,” she told IPS. “Egypt, Libya and Yemen (are witnessing) a multiplication of new organisations, where men and women equally engage in civic matters.

“We have been fighting for human rights, anti-corruption and media freedom since the early fifties, but now we can do it without being prosecuted. New laws about free association have been installed in Tunisia (and) are being drafted in Libya and Egypt. The legal environment is changing.”

According to Hamza, the Arab spring also brought about a new phenomenon: “We see young activists from the diaspora coming back to Tunisia. People who had been exiled and banished are now coming back to help rebuild and reform the country. This cultural meeting between local people and Tunisians from the diaspora is creating a wonderful dynamic, especially in terms of civic engagement.”

In Hamza’s view, the election of Islamist governments should not be regarded as a setback for the revolution. “The Islamists are perceived by the population as martyrs of the oppression, this is what gave them legitimacy as a counter-power. That is why they got elected so easily.

“But in Tunisia and Egypt, the two countries where an Islamic movement tried to include Sharia law in the new consitution, they failed. After weeks of discussion, and under huge pressure from civil society, the Islamist party in Tunisia drafted a constitution in which men and women are equal.”

“We are witnessing a change within political Islam,” Hamza added. “Now that Islamists are running the countries they have to become more pragmatic. There is pressure from within the country: they have to solve issues like unemployment and the distribution of wealth. Then there is external pressure: now they are part of a world (in which) they need the support of Western countries to survive and tell their own people that faith isn’t the answer to their every need.”

“But we still have the feeling more can be done, especially (for) civil society organisations, the only watchdogs of democracy, the only ones who can hold the government accountable. We need the support because we have to remain vigilant: the danger of new dictatorships still exists. We are still in a transition period.

“And after all, it is also in Europe’s own interest that the Arab Spring succeeds,” she added.

Most importantly, she said, the EU must redefine its aid paradigm. “Transition is a process,” she said. “The international community should support the process, not the short-term project. We need strategic patience in order to look at the real achievement of the revolution. Donors want immediate results, but a revolution has ups and downs.”