Garifuna Women, Custodians of Culture and the Environment in Honduras 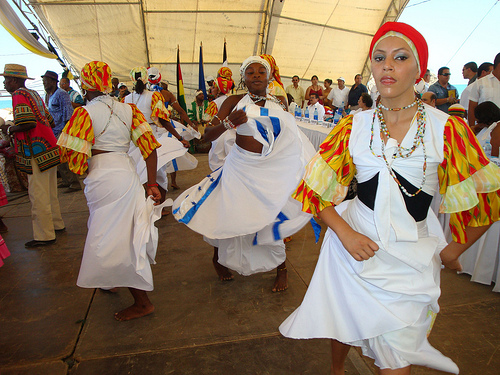 Traditional Garifuna dance forms part of the projects aimed at preserving the culture, boosting food security and conserving the environment in the area. Credit: Thelma Mejía/IPS

TRUJILLO, Honduras , Oct 10 2012 (IPS) - Hurricane Mitch, which devastated Honduras 14 years ago, prompted a group of Garifuna women to start organising, to help the people in greatest need of assistance.

Since then they have expanded their work, and have become an example of the commitment to preserving the environment, farming in a sustainable manner, and preserving their culture.

The experience gave rise to the Garifuna Emergency Committee of Honduras, led mainly by women from the Caribbean province of Trujillo, one of the most beautiful parts of the country, and the first human settlement created by the Spanish colonialists.

According to historical accounts, the Garifunas are descendants of African slaves who survived the sinking of Spanish galleons off the coast of the Caribbean island of St. Vincent in the 17th century, where they intermarried with members of the indigenous Carib tribe.

Their language combines words and grammar of West African languages with the Caribbean’s Arauak dialect, and some French, English and Spanish. The Garifuna are estimated to number around 600,000 in Central America, the Caribbean, Mexico and the United States today.

“When Mitch hit our community and the help didn’t arrive, we organised to go out in search of food, medicine and shelter, because we could not allow our people to sink,” the executive director of the committee, Nilda Hazel Gotay, told IPS.

From Oct. 22 to Nov. 5, 1998, Hurricane Mitch wrought havoc throughout the Caribbean region, Central America, southern Mexico and the United States.

The Garifuna Emergency Committee is made up of nine women and three men, and has been working for 13 years in three main areas: the environment, culture preservation and sustainable agriculture.

Sixteen communities have benefited from the work of the Committee, which since its creation has managed to raise awareness in the communities about the importance of preserving the local environment through projects of reforestation of stream and river basins and mitigation of climate change, and of growing crops without pesticides.

They have received a variety of international aid, because the projects involve extremely poor Garifuna communities that “have to be strong to face the challenges of the future,” said Gotay, a leader of the ethnic group.

“We teach our people how to grow crops that are traditional to our culture, like manioc, taro, plantain, coconuts and sweet potatoes, besides educating our children about Garifuna traditions in dance and music,” she said.

These traditional practices, said Gotay, have helped the communities prepare for natural disasters and for the more frequent and lengthy drought caused by climate change. They have managed to recover river basins in Guadalupe and Trujillo, reforest waterfronts, and recuperate fruit trees like coconut palms.

Hugo Galeano, an expert on environmental issues, told IPS that the work carried out by the Garifuna Emergency Committee is the best example of empowerment and organisation of a community defending its natural resources, “as they are the protagonists of their stories of change and cultural preservation.”

“Garifuna women have demonstrated their leadership and management capacity, without the need of intermediaries, which has brought down costs and gives these grassroots civil society groups a stronger level of community organisation,” he said.

Along with implementing projects in favour of the environment and sustainable agriculture, the communities that have benefited from the Committee’s projects have also managed to keep Garifuna culture from dying out among the younger generations.

They now have a Garifuna market where they sell products related to their cultural and gastronomic roots. And every April, they organise the Educational Garifuna Carnival, where the “baile del maipol” (maypole dance) is held by costumed women dancing with colourful ribbons attached to a tree.

They also explain to children the importance of the traditional Garifuna drum made of hollowed-out hardwoods like mahogany, which links the past and the future, and they teach them to write music in their native language.

Agricultural engineer Noel Ruíz, the mayor of Santa Fe, one of the communities where the Committee is active, said he supports the projects “because I know their work since I was a technical adviser to environmental organisations, and they have managed to respond to the needs of the local population.”

In a conversation with IPS, Ruíz stressed the importance of the strategic alliances with the Garifuna Committee for the preservation of the culture and traditional foods, the creation of market gardens, humanitarian aid and sustainable agriculture.

“They go to poor areas that have been abandoned to their fate, and today they are a great example of association that local governments should follow. I hope this example will be taken into account in national policies on citizen participation, which haven’t been seen yet,” he added.

The work with local governments has been essential to the members of the Garifuna Emergency Committee. They underline the importance of lose relations with the municipal authorities, to coordinate training workshops on the environment, cultural festivals, productive projects and other activities.

“As Garifunas, we love supporting our people, designing projects so they can pull ahead, and thus also teaching our children that there is a culture and a language that must be preserved, and teaching them to learn to love and value nature,” Gotay said.

The Committee has earned international prizes from Ecuador, Canada and the United Nations. It is currently operating with funds from Canada, but it has also received support from organisations in Europe and the United States.