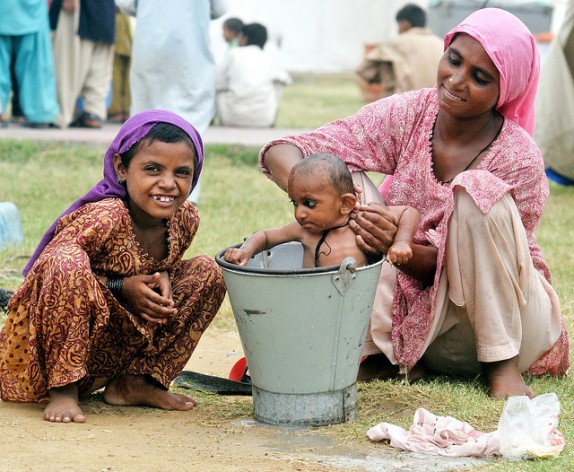 They were there to mark the launch of a new 26-member high-level task force to galvanise support behind the goals of the International Conference on Population and Development (ICPD).

That conference took place nearly two decades ago, in Cairo, Egypt in 1994. It resulted in a Programme of Action that become the guiding document for the United Nations Population Fund, UNFPA.

The ICPD goals will celebrate their 20th anniversary in 2014. None have been reached so far, especially the last.

“I would not say that the goals have not been fulfilled, but that they have only been partially fulfilled. There are a number of reasons for this,” Gita Sen told IPS.

Sen is a professor of public policy at the Indian Institute of Management in Bangalore, and has worked on population policies for 35 years. She is a member of the new task force, and attended the conference in Cairo in 1994.

“One thing that has definitely happened in those 18 years is that there is a language of sexual and reproductive rights, which was never there before,” Sen said.

“A part of what we are seeing is that this language has scared some people in governments, some very religious people, some social conservatives, who see this as a zero-sum game,” she said.

“They think that if women are empowered, if young people get autonomy and choice, they are going to lose out in terms of their ability to control them. Which is probably true, to some extent. But in the end it is for a better life for everybody.”

According to Sen, the rise of conservatism, hindering achievement of the ICPD goals, has its roots in the United States.

“For example, the spread of evangelical conservatism in Africa is funded heavily from this country. It is funded by very rich people who are pouring their millions into very poor countries, in order to ensure that they turn their agenda away from sexual and reproductive rights, against gender equality. And with that much money pouring in it is hardly surprising that we have faced so much trouble as we do.”

Yet Sen maintains a positive attitude. “We are going to win this one. You can not keep young people and women back forever. This is not the dark ages,” she concluded.

Much remains to be done. A staggering 200 million women worldwide still lack access to effective contraception. This results in 80 million unintended pregnancies each year, with 40 million ending in unsafe abortions, many with life-threatening consequences.

And 800 women who carry out their pregnancies, wanted or unwanted, die every day in childbirth – 99 percent of them in developing countries.

“We know that our response has been inadequate,” Ishita Chaudhry, a member of the new task force and the leader of the youth organisation TYPF in India, working for sexual and reproductive rights, said at the event.

Chaudhry highlighted the importance of banning child marriage in order to achieve the ICPD goals.

Child brides, girls married before their 18th birthday, run especially high risks of unwanted pregnancy and also of abuse. And there are currently over 60 million child brides worldwide.

Chaudhry told the audience about how she grew up in a middle-class family in India, with her mother working as a teacher in the slums. When Chaudhry befriended some of her mother’s students, she was shocked to learn that the most common topic of discussion was if the girl’s parents were planning to marry them off.

“I lost some of my closest friends… They got married and their husbands wanted them to stay home to cook and clean and have babies,” Chaudhry said.

On top of that, marital rape was not considered a crime in India at the time, and it is still legal in a great number of states.

“How do you say no when your government do not recognise your right to do it?” Chaudhry asked.

“Women’s sexual and reproductive rights are at the heart of sustainable development,” said Tarja Halonen, a former president of Finland and co-chair of the new high-level task force.

“Pregnancy should be one of the happiest times in our life… Girls pay the price of taboos and double standards,” she said.

Crown Princess Mary of Denmark also appeared at the launch of the new task force, of which she is a member.

“We are here today because… the Cairo agenda is an unfinished agenda,” Princess Mary said.

A famous feminist slogan is that the personal is political. And Princess Mary did go on to talk about day-to-day life in the Danish royal family.

“My oldest son is soon that age when he will start to ask how babies are made. He will receive answers from us, and education in school… With knowledge comes the opportunity to make informed decisions,” she said.

According to Princess Mary, talking about sex may very well be uncomfortable. “But not talking about these issues might have a much higher price.”