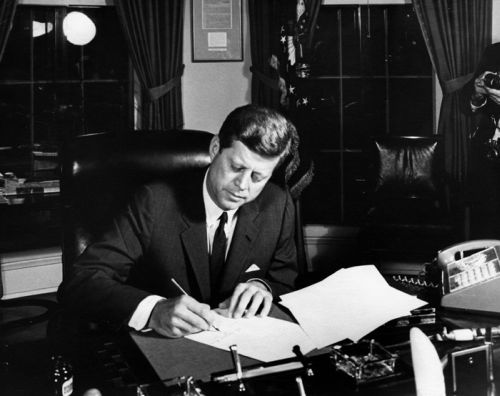 WASHINGTON, Oct 22 2012 (IPS) - It was exactly 50 years ago when then-President John F. Kennedy took to the airwaves to inform the world that the Soviet Union was introducing nuclear-armed missiles into Cuba and that he had ordered a blockade of the island – and would consider stronger action – to force their removal.

“It was the most chilling speech in the history of the U.S. presidency,” according to Peter Kornbluh of the National Security Archive, who has spent several decades working to declassify key documents and other material that would shed light on the 13-day crisis that most historians believe brought the world closer to nuclear war than at any other moment.

Indeed, Kennedy’s military advisers were urging a pre-emptive strike against the missile installations on the island, unaware that some of them were already armed.

Several days later, the crisis was resolved when Soviet President Nikita Krushchev appeared to capitulate by agreeing to withdraw the missiles in exchange for a U.S. pledge not to invade Cuba.

“We’ve been eyeball to eyeball, and the other fellow just blinked,” exulted Secretary of State Dean Rusk in what became the accepted interpretation of the crisis’ resolution.

“Kennedy’s victory in the messy and inconclusive Cold War naturally came to dominate the politics of U.S. foreign policy,” write Leslie Gelb, president emeritus of the Council on Foreign Relations in a recent foreignpolicy.com article entitled “The Myth That Screwed Up 50 Years of U.S. Foreign Policy.”

“It deified military power and willpower and denigrated the give-and-take of diplomacy,” he wrote. “It set a standard for toughness and risky dueling with bad guys that could not be matched – because it never happened in the first place.”

What the U.S. public didn’t know was that Krushchev’s concession was matched by another on Washington’s part as a result of secret diplomacy, conducted mainly by Kennedy’s brother, Robert, and Soviet Ambassador Anatoly Dobrynin.

Indeed, in exchange for removing the missiles from Cuba, Moscow obtained an additional concession by Washington: to remove its own force of nuclear-tipped Jupiter missiles from Turkey within six months – a concession that Washington insisted should remain secret.

“The myth (of the Cuban missile crisis), not the reality, became the measure for how to bargain with adversaries,” according to Gelb, who interviewed many of the principals.

Writing in a New York Times op-ed last week, Michael Dobbs, a former Washington Post reporter and Cold War historian, noted that the “eyeball to eyeball” image “has contributed to some of our most disastrous foreign policy decisions, from the escalation of the Vietnam War under (Lyndon) Johnson to the invasion of Iraq under George W. Bush.”

Dobbs also says Bush made a “fateful error, in a 2002 speech in Cincinnati when he depicted Kennedy as the father of his pre-emptive war doctrine. In fact, Kennedy went out of his way to avoid such a war.”

To Graham Allison, director of the Belfer Center at Harvard University’s Kennedy School of Government, whose research into those fateful “13 days in October” has brought much of the back-and-forth to light, “the lessons of the crisis for current policy have never been greater.”

In a Foreign Affairs article published last summer, he described the current confrontation between the U.S. and Iran as “a Cuban missile crisis in slow motion”.

Kennedy, he wrote, was given two options by his advisers: “attack or accept Soviet nuclear missiles in Cuba.” But the president rejected both and instead was determined to forge a mutually acceptable compromise backed up by a threat to attack Cuba within 24 hours unless Krushchev accepted the deal.

Today, President Barack Obama is being faced with a similar binary choice, according to Allison: to acquiesce in Iran’s acquisition of a nuclear bomb or carry out a preventive air strike that, at best, could delay Iran’s nuclear programme by some years.

A “Kennedyesque third option,” he wrote, would be an agreement that verifiably constrains Iran’s nuclear programme in exchange for a pledge not to attack Iran so long as it complied with those constraints.

“I would hope that immediately after the election, the U.S. government will also turn intensely to the search for something that’s not very good – because it won’t be very good – but that is significantly better than attacking on the one hand or acquiescing on the other,” Allison told the Voice of America last week.

This very much appears to be what the Obama administration prefers, particularly in light of as-yet unconfirmed reports over the weekend that both Washington and Tehran have agreed in principle to direct bilateral talks, possibly within the framework of the P5+1 negotiations that also involve Britain, France, China, Russia and Germany, after the Nov. 6 election.

Allison also noted a parallel between the Cuban crisis and today’s stand-off between the U.S. and Iran – the existence of possible third-party spoilers.

Fifty years ago, Cuban Prime Minister Fidel Castro had favoured facing down the U.S. threat and even launching the missiles in the event of a U.S. attack.

But because the Cubans lacked direct control over the missiles, which were under Soviet command, they could be ignored. Moreover, Kennedy warned the Kremlin that it “would be held accountable for any attack against the United States emanating from Cuba, however it started,” according to Allison.

The fact that Israel, which has repeatedly threatened to attack Iran’s nuclear sites unilaterally, actually has the assets to act on those threats makes the situation today more complicated than that faced by Kennedy.

“Due to the secrecy surrounding the resolution of the Cuban missile crisis, the lesson that became ingrained in U.S. foreign policy-making was the importance of a show of force to make your opponent back down,” Kornbluh told IPS.

“But the real lesson is one of commitment to diplomacy, negotiation and compromise, and that was made possible by Kennedy’s determination to avoid a pre-emptive strike, which he knew would open a Pandora’s box in a nuclear age.”