UNITED NATIONS, Oct 26 2012 (IPS) - As the Millennium Development Goals (MDGs) limp towards their target date of 2015, the United Nations is shifting its focus to another long-term action plan: a new set of Sustainable Development Goals (SDGs). 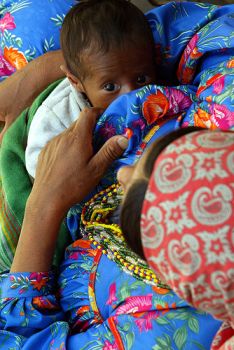 A follow-up to a decision taken at the Rio+20 Conference on Sustainable Development last June, the proposed SDGs will be a list of post-2015 development and environmental goals touted as a logical successor to the eight MDGs adopted by the General Assembly back in 2000.

The 193-member General Assembly has been mandated to appoint a still-to-be-named Working Group of about 30 countries – as part of an intergovernmental process – which will be entrusted with the task of articulating a list of post-2015 SDGs.

The HLP plans a meeting in London on Nov. 1, to be followed by a dialogue with civil society on Nov. 2. The latter event is scheduled to be live-streamed on www.worldwewant2015.org.

Meena Raman, legal advisor to the Penang-based Third World Network and an active participant in the Rio+20 summit, told IPS that any post-2015 development agenda should be based on an analysis of the factors that hinder or threaten development in developing countries.

“Just having a set of goals and targets, as was the case in the initial approach to MDGs, is clearly inadequate,” she noted.

The eight MDGs include the eradication of extreme poverty and hunger; universal primary education; empowerment of women; reduction of child mortality and improvement of maternal health; eradication of HIV/AIDS, malaria and other diseases; environmental sustainability; and a global partnership for development.

But most developing nations are expected to miss some – or most – of these goals by 2015.

Raman said there is a need to spell out international factors that undermine development in developing countries, such as the unstable and speculative-based financial system which has distorted the global economy; the unfair trading system, including free trade agreements that are skewed against the global South; and an investment system that has unfair investor-State dispute mechanisms (allowing companies to sue governments for important measures governments take to protect the public interest).

Additionally, she said, there is an intellectual property system that hinders technology transfers and raises costs of essentials.

“All these are worsened by the global economic crisis which will overwhelm development prospects,” Raman predicted.

Asked if the SDGs will focus more on the environment and sustainable development (as the name implies) or on enhanced MDGs, Manish Bapna, managing director of World Resources Institute, told IPS there are currently two tracks.

But, ultimately, these tracks should converge into one framework that incorporates sustainability, without losing the importance of reducing global poverty and improving human well-being.

The proposals on the table are incredibly wide-ranging, including topics like biodiversity, oceans, sustainable cities, and changing consumption patterns; and proposals for MDG-like goals focused on poverty, health, education, and gender, he added.

There are also numerous groups advocating for the addition of a particular theme, such as peace, the private sector, and climate rights.

“The challenge will be to create goals that are few in number, focused, and simple,” he said.

While tough choices need to be made, prioritisation of the goals will be essential for their success, said Bapna, who participated in last week’s U.N. Special Event Panel on Conceptualizing a Set of Sustainable Development Goals, which took place before an audience of senior policymakers and U.N. ambassadors and delegates.

Asked if the SDG process will be any different from the MDG process, Raman of the Third World Network, told IPS, “The SDGs should cover all three pillars of economic, social and environment in a balanced manner – and not just focus on one pillar like the environment over the other two pillars.

“It is important to have a holistic approach in developing the goals, and not just focus on the goals, but also address how to implement them, including the means of implementation,” she added.

Raman also pointed out that the development of the SDGs should be guided by the Rio+20 outcome document.

She said all the existing shortcomings must be addressed and corrected as a prime approach to the new U.N. development agenda.

“There is a need for economic production to take place in developing countries which is supported by and not hindered by global factors like destabilising finance, unfair trade and overly strict intellectual property regimes.”

She said incomes and jobs, complemented by good social policies, should be the focus of development policies, and this should be enabled and not hindered.

Asked about inputs from civil society, she pointed that this is what the Rio+20 outcome document also recommends.

“This must be followed through, and efforts must especially be made to ensure the participation of civil society from developing countries,” she added.

Asked about the participation of non-governmental organisations (NGOs), Bapna said, “We believe that the process will be open, bringing in perspectives from NGOs, civil society and more.”

He said WRI is currently working with a diverse group of civil society organisations to provide input “and we intend to be deeply engaged going forward”.

“We recognise that an inclusive, consultative process that engages the global poor and historically disenfranchised is crucial for achieving the goals that emerge,” Bapna said.

This is particularly true, he said, compared to 20 years ago because the international aid landscape is much more complicated.