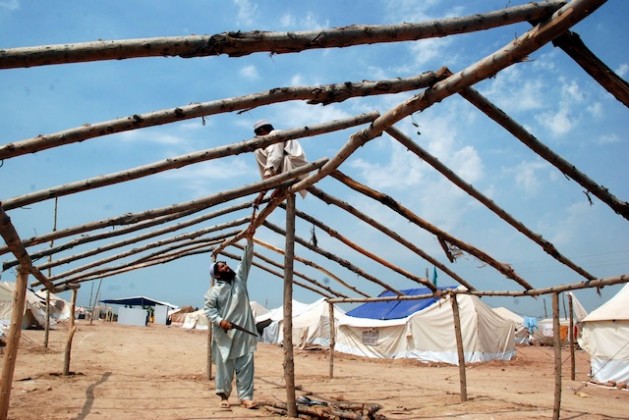 “We had a very good grain business back home but all is now ended because we left our village five years ago and live in a state of poverty now,” Muhammad Akram, 59, from Wana, which is the headquarters of the South Waziristan Agency, told IPS. Akram now lives in a rented home in the adjacent Dera Ismail Khan district of Khyber Pakhtunkhwa (KP).

The Federally Administered Tribal Areas (FATA) consists of seven tribal units located near the Afghanistan border. The area has been a bed of militancy since 2005, forcing 1.2 million of its 5.78 million population to migrate to other areas in the face of dangers from both the militants and the military.

After the dismissal of their government in Kabul by the U.S.-led coalition towards the end of 2001, the Taliban crossed the porous 2,400 km border and took sanctuary in FATA.

In the middle of 2005, the army launched an operation in South Waziristan to evict the Taliban. This triggered a mass exodus from the region. Operations were also launched in Orakzai, Mohamnd, Bajuar, Kurram, Bajaur and Khyber agencies, forcing the residents to leave their native villages and settle in safer places.

“The endless displacement has affected us adversely, because we have lost our businesses, homes and agricultural activities,” Gul Zameer, a resident of Mohamnd Agency where an operation was started in May 2009 told IPS. He now lives with his family of 12 in a tent in Jallozai camp near Nowshera, one of the 25 districts of KP.

“I have a big shop where we earned sizeable profit, and life was prosperous, but after the military operation I have lost everything,” he said. “Now I work as construction worker which fetches me three dollars a day which is not enough to meet the basic needs of my family.

“Most of our children now do odd jobs to supplement the income of their parents and keep the kitchen running,” he said. “My two sons aged 13 and 15 work in automobile workshop. Had we been in our village, they would have been in school.”
Mahboob Ali, another displaced person from violence-wracked Bajaur Agency, works as a bus conductor in Charsadda district of KP since an operation was launched in his ancestral village in 2007.

“Life is becoming harder every passing day as there is no end in sight to military offensives, and indications are that we would continue to bear the brunt of Talibanisation in future too,” he told IPS.

The World Food Programme has said it is providing food to 1.2 million internally displaced persons (IDPs), and called on the international community for more generous funding.

Uzair Shah, 45, who migrated to Peshawar from North Waziristan Agency in the wake of soaring insurgency last year, said he sold 10 shops at throwaway prices and now lives in a rented place in Peshawar that is too small for his wife, three sons and five daughters.

“I have eaten all the cash amount I had got from sale of property and I’m now seeking a loan to start some business here. Nobody is willing to give me a loan because everyone knows my economic conditions will never show improvement as long as military actions continue,” he told IPS.

KP Information Minister Mian Iftikhar Hussain said they were trying to support displaced people, but the government had limited resources. “We are looking towards donor agencies to assist them, but the only way out is elimination of militancy from FATA,” he told IPS.

“We have been urging a full-scale military operation against Taliban so that people could be repatriated. Even the lawmakers from FATA stay either in Islamabad or Peshawar. They cannot go there due to fear of militants.”

Many of the displaced have become beggars because they have no opportunities to work.

“The local population is not willing to hire our services because they prefer to get local people,” said Pervaiz Khan, a mason from South Waziristan who lives in the nearby Bannu district. “We are ready to work for less wages but people are still not ready to give us work.”

North Waziristan lawmaker Kamran Khan told IPS the situation will improve soon and the IDPs would return. “Under a programme the repatriated families will get 1,000 dollars on which they could do their businesses.” (End)