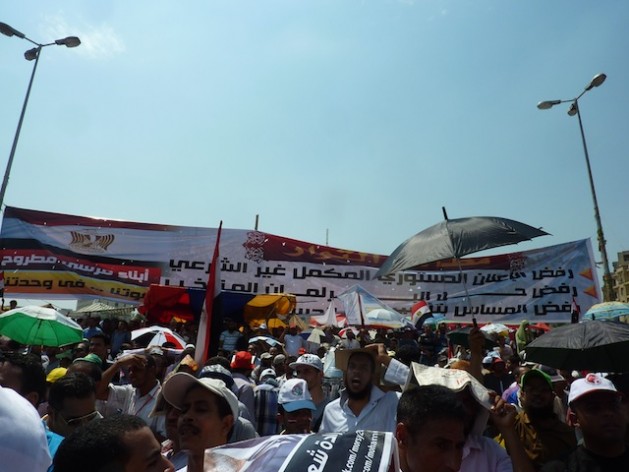 Tahrir Square, the cradle of Egypt's revoltution, has become also a place for harassment of women. Credit: Khaled Moussa al-Omrani/IPS.

CAIRO, Nov 1 2012 (IPS) - Egyptian bullies who sexually harass women in the streets, often taking advantage of mob situations and the anonymity these provide, are getting a taste of their own medicine – and they don’t like it.

Due to the plague of sexual harassment, which the Egyptian authorities have appeared unwilling to address hitherto, Egyptian women have been taking matters into their own hands by organising anti-sexual harassment campaigns. And their efforts are being supported by the growing number of young Egyptian men who have formed anti-harassment squads.

A young Egyptian man, dressed in faded blue jeans, his hair fashionably slicked with gel into a spike hairdo, is suddenly surrounded by a group of Egyptian men dressed in fluorescent green jackets emblazoned with anti-sexual harassment logos.

Several of the anti-harassment squad put the startled young man into a headlock. He is then lightly slapped on both sides of his face which leave huge black grease marks making him stand out from the crowd. After a verbal dressing-down for his sexual misconduct his particulars are recorded and he is then released, as a crowd of curious onlookers gather around the highly embarrassed youth.

This is just one of many cases that have been documented and videoed recently in downtown Cairo. Some of the detained men were already marked with mercurochrome which was sprayed at them by young women carrying water pistols filled with the liquid as well as tear gas.

On Sunday Egyptian police and the minister of the interior reported arresting 172 men on charges of sexual harassment and assault during the first two days of Eid Al Adha, one of Islam’s holiest holidays which began on Friday. The majority of arrests took place in Cairo but arrests were also made in other parts of the country.

The arrests followed a statement by Cairo’s Security Directorate on Saturday that it had recorded 87 verbal harassment cases and six physical harassment cases on Friday. While sexual harassment is a daily occurrence in Egypt during holidays there is a sharp increase in the assaults.

Activists behind an initiative called “I witnessed harassment” reported last week that more than 60 percent of women who were in downtown Cairo on Friday were subjected to sexual harassment.

Hotlines were established for women to phone, and groups from the anti-sexual harassment squads patrolled hotspots in downtown Cairo. The activists reported several cases of mobs of men targeting women. In one incident a group of 40 men attacked 50 girls.

Sexual intimidation has long been a problem in Egypt. According to a survey issued in 2008 by the Egyptian Centre for Women’s Rights, 83 percent of Egyptian women and 98 per cent of foreign women had been exposed to sexual harassment at least once.

Conservative Muslim women covering their hair have been targeted as have women dressed in the niqab which covers their entire body, leaving only their eyes visible.

Members of the “Catch a Harasser” movement and members of the Egyptian Democratic Institute in Baharia held a silent protest last week in the nothern Delta city Damanhour, against sexual harassment in anticipation of the forthcoming holiday.

They held placards reading, “If you dislike my clothes or my walk, is that an excuse to molest me? If that was so, why do you still harass me when I’m veiled or fully veiled?”

During the Egyptian revolution, and subsequent protests in Cairo’s Tahrir Square, groups of men were also seen attacking female protestors, taking advantage of the lack of a police presence and the anonymity of the crowd.

Activists reported to the media that some of these attacks were deliberately organised by members of the former regime of Hosni Mubarak to intimidate female activists. Other mobs of sexual predators, however, appeared to have been acting spontaneously.

A number of foreign female journalists have been attacked in Tahrir. The infamous attack on CBS’s South African correspondent Lara Logan made international headlines when she was reporting from Tahrir during the revolution.

The latest attack took place against Sonia Dridi, a correspondent for France 24, when she was surrounded by a gang of young males as she reported from the Egyptian capital recently.

After being groped for several minutes she was eventually rescued by a fellow reporter who dragged her to safety.

Despite its reluctance to take action the growing number of attacks has forced the government’s hand. Last Monday Egyptian Prime Minister Hesham Qandil said that his government was preparing a draft law which would impose harsher penalties against perpetrators of sexual harassment.

His statement came after the National Women’s Council started a national campaign “Patrols Against Sexual Harassment,” in August 2012 to combat sexual harassment in Cairo.

Furthermore, officials announced last week they were planning to create a network of surveillance cameras along the main streets and squares of Cairo to clamp down on sexual harassment in the city. They added that the faces of perpetrators would be broadcast on TV and shown on the Internet.

However, activists have complained about police failing to take action even when given the details of the perpetrators saying that often the authorities questioned the identity of the attackers without taking any legal actions against the harassers.