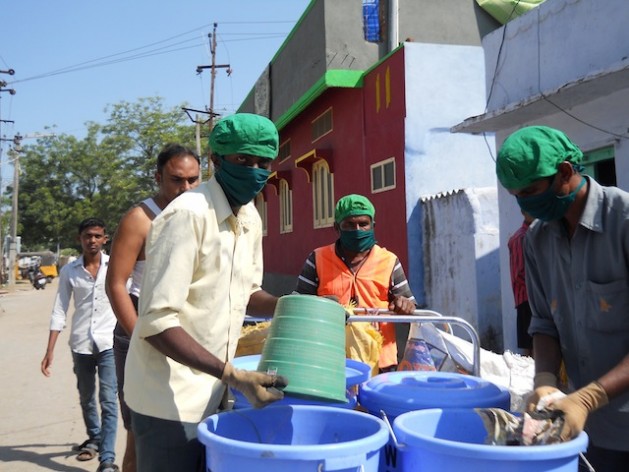 386 teams in Warangal recently competed for the ‘best performance’ trophy in collection and disposal of household wastes. Credit: Keya Acharya/IPS

WARANGAL, India, Nov 22 2012 (IPS) - In a country notorious for the inability to deal with the waste it generates, municipal officials in the southern Indian state of Andhra Pradesh are now resorting to making waste management a competitive sport, in their bid to cajole the entire nation to clean up.

The historic city of Warangal recently hosted 386 teams from 57 municipalities across the northern half of Andhra Pradesh – the largest state in south India and the fourth largest in the country – competing for the ‘best performance’ trophy in collection and disposal of household wastes.

“I found this an opportunity to learn; I too wanted to know how to get it done,” said Warangal city’s municipal commissioner, Vivek Yadav. Warangal’s population of 600,000 produces 300 metric tonnes of household waste daily.

Waste segregation and recycling might be ‘old hat’ in most countries, but in India, where cities are growing exponentially, negligence, administrative mismanagement and lack of infrastructure have resulted in open dumping in over 90 percent of cities and towns countrywide.

The Energy and Resources Institute in New Delhi estimates that by 2047, waste generation across India’s cities will reach 260 million tonnes per year.

In 2000, in response to a petition filed by Almitra Patel, a Bangalore-based civil engineer from the Massachusetts Institute of Technology (MIT), the Supreme Court made it mandatory for the country’s municipalities to take responsibility for the safe disposal of its wastes.

But implementation of the Municipal Solid Waste Management Rules has been poor.

“We wanted to try and harness the spirit of competition and sportsmanship that India displays in cricket, for public health,” Singh said.

The force for the ‘Clean Cities Championships’, however, was Andhra Pradesh Joint Director of Municipal Administration, Khadar Saheb, the man behind India’s first ‘waste-compliant’ city, Suryapet, in 2003.

Each team thereafter consisted of a guest municipality’s Sanitary Inspector as team leader and two guest staff accompanied by three officials from the host city.

Pushing trolleys door to door between the hours of seven and eleven every morning, each team was given a score based on how it handled the collection process.

Teams unloaded trolleys full of waste at the collection centre in the town’s water tower premises before continuing on their rounds.

Collection staff varied from municipal tractor-drivers and cleaners to garbage-pickers employed by the municipality.

“The aim was to train all municipal staff so that they go back to their constituencies and spread awareness,” Saheb told IPS.

Plastics went to a storage yard for collection by recycling units, wet wastes went to a dumpsite 15 kilometres outside the city, while scraps from the city’s two main markets went directly for vermicomposting.

The competition caught the attention of a large swathe of the city’s residents.

At the sound of the teams’ whistle each morning, housewives came to the doors of their homes located along the ancient, winding lanes of the old city, once part of the fort belonging to the Kakatiya dynasty that ruled most of present-day Andhra Pradesh from the 12th to 14th century.

Sixty-one-year-old Sultana Begum and her tenant, 32-year-old Rani, were unsure of exactly how their segregated wastes were being disposed of, but did not hesitate in proclaming the process a “good thing”, a sentiment echoed by various other households throughout Warangal.

But not everyone was excited about the model.

The exclusion of ‘ragpickers’, India’s garbage-sorters who make a living by reselling plastics retrieved from garbage, posed a serious challenge to dissemination of information and training, though Singh, the ‘hub man’ of the operation, says the ragpickers will get inducted into the recycling system in due course.

Others are disgruntled too. Those who wore protective gloves complained they got damp and were uncomfortable; those who didn’t receive any, due to inadequacies in distribution, were aggrieved at being left out.

At the dry collection centre, the city’s Sanitary Inspector kept a critical eye on the sorting and packing of plastics, labelling the process “too risky”.

But Joint Director Saheb and Commissioner Yadav heard the string of complaints with quiet composure and unwavering determination.

“It’s a brave attempt,” said Supreme Court Solid Waste Committee specialist Patel, who had been invited to the event as a guest of honour.

“This message needs to snowball,” she told IPS.

The prize for best team was awarded to the Khammam municipality, while several others received a slew of consolation prizes. “There are no losers in this game,” Singh stressed.

The competition will now be taken to several other cities in Andhra Pradesh.