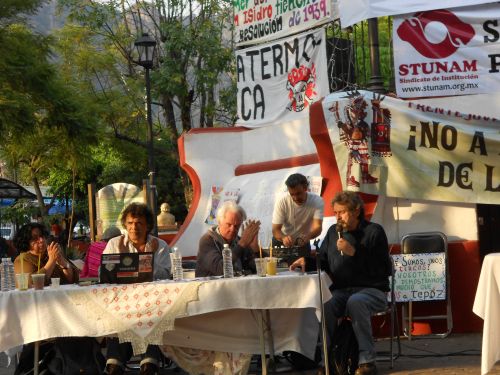 Environmental complaints are brought before the People's Tribunal in Morelos. Credit: Emilio Godoy/IPS

MEXICO CITY, Nov 30 2012 (IPS) - “A Canadian firm wants to extract minerals in our area; it will harm the environment and use up water needed by the community,” complained Hipólito García, who lives in Tetlama, 110 kilometres south of the Mexican capital. Similar complaints are echoed around the country.

García’s protest is aimed at two concessions granted to the mining company Esperanza Silver de México, a subsidiary of the Canadian firm Esperanza Resources Corp, for mining silver and gold on 1,500 hectares in the central state of Morelos.

“The mining company will not benefit San Agustín Tetlama,” García, a small farmer and a member of a local group opposed to the mine because of the negative impact they say it will have on their village of 1,400 people, told IPS.

The mining boom in Mexico is an example of the alleged inconsistencies of the environmental policy of President Felipe Calderón, who hands over the presidential sash on Saturday Dec. 1 to Enrique Peña of the Institutional Revolutionary Party (PRI) which is returning to power in the country it ruled for seven decades, from 1929 to 2000.

During his six years in office, Calderón presented himself as a protector of the environment at numerous international conferences. But his policies have diverged from that image, in the view of environmentalists and experts.

“We are still very far from enforcing and complying with environmental law,” because the institutions are underfunded, understaffed and lack the necessary infrastructure to enforce the law, Gustavo Alanís, head of the Mexican Centre for Environmental Law (CEMDA), an NGO, told IPS.

“Nothing is more important than the environment; the same priority must be given to this issue as the economy, security, job creation, education and other areas,” he said.

The Calderón administration of the conservative National Action Party (PAN) launched a Special Programme on Climate Change (PECC) for 2009-2012 with 105 goals and 294 targets for mitigation and adaptation to climate change, to which Mexico is highly vulnerable.

The measures were aimed at reducing the country’s emissions of carbon dioxide (CO2), one of the main greenhouse gases responsible for global warming, by 51 million tonnes by this year.

The environment ministry reported in April that 93 percent of the programme goals had been fulfilled, although it did not offer details about specific areas of the programme.

Mexico emits an estimated 709 million tonnes of CO2 a year, mainly from energy generation and use, transport and agriculture.

The PECC involves actions like replacing old refrigerators and incandescent light bulbs, installing solar water heaters, reforesting, and creating sanitary landfills. Considerable progress has been made in these areas.

However, less success has been achieved in terms of relieving pressure on fisheries, combating illegal logging or promoting renewable energies like geothermal or solar energy.

Apart from backing the mining industry, the Calderón government has taken decisions to build large hydroelectric plants, highways and tourist complexes, to subsidise fossil fuels and to promote genetically modified maize in a country regarded as the birthplace of maize.

Calderón’s environmental policy has come in for criticism by the People’s Tribunal that has held sessions in this country since 2011 and has heard cases to do with violence; impunity and lack of access to justice; migration; femicide and gender violence; attacks against maize and food sovereignty; environmental destruction; and peoples’ rights.

The rulings of the People’s Tribunal, an international ethical tribunal that tries cases involving crimes against humanity, are non-binding but carry immense moral weight.

The Mexican chapter, which will conclude its hearings in 2014 with a resolution based on the evidence collected under the seven categories described, has received reports of at least 33 cases of environmental destruction in different parts of the country.

“Progressive positions are being taken in international arenas, but there are an enormous number of contradictions in the country itself,” Carlos Zarco, the executive director of Oxfam Mexico, told IPS.

When it comes to national policies, “there are commercial and financial interests that become entrenched in each country, and which see natural resources as a great business opportunity rather than something that needs protecting for the future of the country,” he said.

“The Mexican government became caught up in those tangled interests that have harmed collective rights,” Zarco said.

The General Law on Climate Change, in force in this country since June, transforms the PECC into a state policy and creates an environmental fund, as well as a national information system for monitoring the phenomenon, an emissions register and a domestic carbon credits market.

As will other matters, enforcing this law will be in the hands of the Peña administration.

Mexico will present its latest inventory of CO2 emissions, which could be the basis for environmental planning by the next administration, at the 18th Conference of the Parties to the United Nations Framework Convention on Climate Change (COP 18), which is being held in Doha, Qatar, from Nov. 26 to Dec. 7.

In Alanís’s view, the environmental framework needs to be reformed, because “discretionary approval continues to be granted to projects that are environmentally harmful, that do not comply with the law, that cannot be justified technically, scientifically or legally, and yet are allowed to go ahead.”

Alanís stressed the urgency of curbing deforestation, pollution and over-exploitation of aquifers, as well as improving management of hazardous waste.

For his part, Zarco proposes making the environment a top priority in any development model. “The foremost challenge is to put the country’s legal framework into practice. This must become a transversal issue in public policies,” he says.

If the government does not stop the mining projects, the people will, García said. “In 2006 we made them close the sanitary landfill in the village, and now we are taking up the struggle to close down the mining work,” he said.