Bicycle transportation is starting to make headway in the Mexican capital.

MEXICO CITY, Oct 9 2012 (IPS) - Juan Longueira, 56, uses the bicycles of the Ecobici system three times a day, to commute to and from work and to exercise along the Paseo de la Reforma, a central Mexico City avenue.

“I think it’s a good service,” he told Tierramérica. “I use it in the morning and in the afternoon to go to and from the office, and at noon to get exercise,” said Longueira, who works for the Ministry of Public Education and in September signed up for the Ecobici Individual Transport System, which the city government launched in 2010.

There are 32,500 users of the system, who have used the bicycles some 4.7 million times so far. In September, the left-wing city government expanded the system to Polanco, a neighborhood on the west side of the city. Ecobici now has 168 stations and 2,380 bicycles in the central and western parts of the capital. 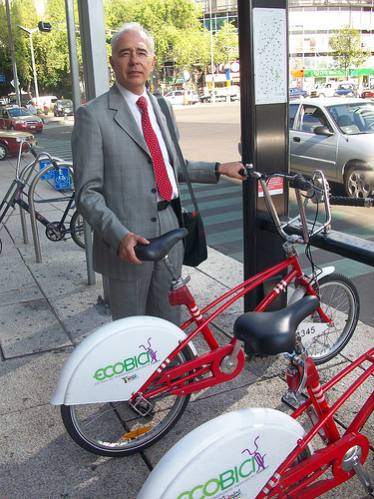 Juan Longueira uses Ecobici bikes to commute to and from work and to exercise. Credit: Emilio Godoy/IPS

But the program still faces many challenges, to reach lower-income parts of the city and increase the promotion of the bicycle as a healthy, environmentally friendly means of transport.

Ecobici “has helped change the way people see bicycles; that has been very important,” Areli Carreón, the president of the non-governmental Bicitekas, told Tierramérica*.

She said the question is the future viability of the initiative. “We have to see if it expands to lower-income areas,” she said.

Members register with Ecobici and pay an annual fee equivalent to 30 dollars. That gives users the unlimited right to use the bicycles for 45 minutes at a time as many times as they like year-round. If the user does not return the bike within 45 minutes, they pay between 70 cents and two dollars.

One reason Ecobici has grown is the government subsidy it receives, of around seven million dollars.

Ecobici was launched in February 2010, after a year of planning together with the Institute for Transportation and Development Policy (ITDP), a U.S.-based international non-governmental organisation that promotes sustainable and equitable transportation and has been working with the Mexico City government on other transportation initiatives as well.

The Mexican branch of the U.S. company Clear Channel Outdoor has the concession to offer the service, with its Smartbike line of bicycles.

The Mexico City government also has a program to lend out bicycles on the Paseo de la Reforma, one of the city’s main avenues, and it has built stations where any rider can park their bicycle.

The authorities estimate that local residents make over 120,000 trips a day on bicycles in the city.

The promotion of bike-riding forms part of the Green Plan adopted by the city government in 2008, which includes the creation of 6.8 km of exclusive bike lanes and 60 km of bike paths in the southern and western parts of the city.

In Culiacán, on the northwest side of Mexico City, bicycles are “a new form of recreation and have become a symbol of identity for the city,” architect Juan Rojo, who has been an active bike rider since 2008, told Tierramérica.

In that city of 675,733 people, there are 9,000 people who get around by bicycle, and the municipal government plans to build 30 km of bike paths. “It is a growing alternative form of transport,” said Rojo, director general of the Ciclos Urbanos association.

Since 2009, Ciclos Urbanos has organised the Ciclonoche on the first Tuesday of every month – a seven-kilometre, one-hour night-time ride in which 14,000 people from Culiacán have taken part.

Ciclos Urbanos estimates that 8,000 liters of gasoline were saved and 21 fewer tons of carbon dioxide were emitted as a result of those rides.

An assessment by the Mexican Centre for Sustainable Transport (CTSEMBARQ) found that Ecobici users were more likely to leave their cars at home, and that the means of transport that was most replaced by the bicycle was the microbus, one of the six kinds of public transport in the city.

The non-governmental organisation will study the impact of Ecobici on air quality, because increased bicycle use implies a reduction in the use of polluting means of transport.

What is needed is “an integrated system of transport, with different modalities and sustainable parking stations,” said Hilda Martínez, manager of air quality and climate change in CTSEMBARQ, which depends on the Washington-based World Resources Institute (WRI).

The Ministry of the Environment and the Centre for Mexican and Central American Studies organised a survey among 1,000 users of Ecobici, whose results will be published in November.

“It must be evaluated whether Ecobici is the best way to promote the use of bicycles. What we say is that it is not the only option to promote urban cycling. Infrastructure on every street, or exclusive bike lanes, are not indispensable,” Carreón said.

By 2013, the aim is to add another 35 km of paths, with the expansion in neighbourhoods far from the centre, in the southern and eastern parts of the city.

Some, like Rojo, suggest adopting a system of public bicycles, with the payment of fees for individual trips, which would become a form of individual public transport.

Martínez said “the ideal would be to invite another partner to finance the program, because it could become self-financing.”

As a user, Longueira says better promotion of the system is needed. “There are people who work with me who don’t even know about it,” he said, while returning the bicycle.